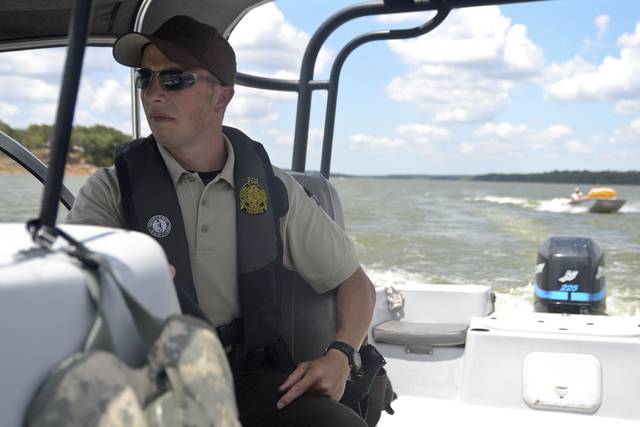 Danny Proctor leads a boat into a cove while on patrol at Lake Thunderbird in Oklahoma. (Photo by Adam Kemp, via newsok.com).

You might think that the highway patrol in landlocked Oklahoma doesn’t need a Marine Enforcement section, but it has one.
Highway Patrol Trooper Danny Proctor and his colleagues patrol 38 state lakes, conduct search-and-rescue missions, investigate boating accidents and drownings and assist in case of natural disasters, the Oklahoman reports.
The newspaper features Proctor, a member of the Memorial Road Church of Christ in Edmond, Okla.

Proctor said he knew when he joined the patrol in 2002 that he wanted to be on the water. Even after being assigned to Lake Thunderbird for the past decade, he said he’s still surprised to see the same accidents again and again.
“I had never operated a boat until I began working for the state,” Proctor said. “I just felt like this is where I could help do the most good.”
After five minutes out on the water Sunday, Proctor had already dished out the first ticket of the day.