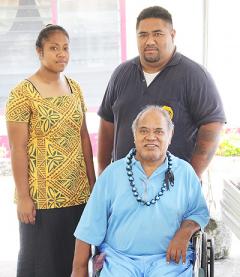 The Somoa News reports on Fetuao Fa’asavalu, a high school volleyball standout who earned a scholarship to play at Western Texas College in Snyder, Texas (between Lubbock and Abilene).
The athlete is a member of the Nu’uuli Church of Christ in Pago Pago, American Samoa, where her father, Luaao Soli, serves as minister. American Samoa is a U.S. territory in the South Pacific, about 2,500 miles south of Hawaii. The athlete’s brother, Junior Luaao, also is her coach.

Fetuao’s advice to all the young female athletes who are still vying for a scholarship opportunity such as this; “just be patient, have a humble heart, and play hard when you get the chance. And always remember, practice makes perfect.”
With the talent that she has now, Fetuao would’ve never been able to encounter such a scholarship, without the help of her coach and family member, brother Junior Luaao, who told Samoa News about the story of his coaching career with Fetuao, “what really brings joy to my heart, is to see one of our players make it out there, especially the people from the island, making it academically, and with the help of some of the coaches that were down here, it brought a lot of great joy to us.”
He added, “throughout my coaching career, I have seen some ups and downs for my players, the talent is there, but the most struggles we have here on island is academic. Our goal for both myself and brother Bill from both congregations, was to have the players expose themselves the best physically, mentally, and spiritually. As you all know, college life is full of temptations, but to have that spiritual goal and putting God first in your life will definitely have you accomplish the goals in life.”