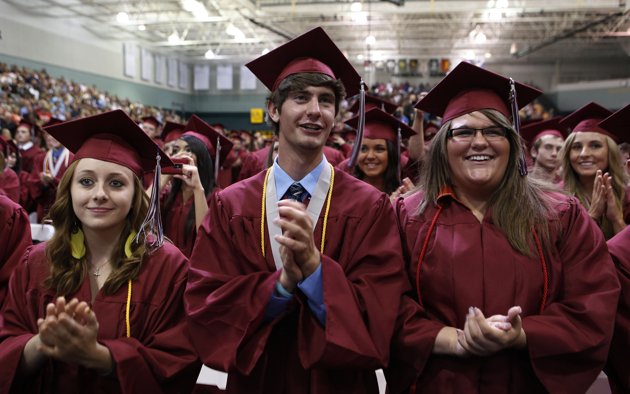 In his May 21 commencement address to graduates of Joplin High School — a year after a tornado devastated the Missouri town and killed 161 people — President Barack Obama highlighted the journey of senior Quinton Anderson, who plans to attend Harding University.
Readers of The Christian Chronicle may recall that Anderson’s parents, Bill and Sarah, members of the 26th and Connecticut Church of Christ, died in the tornado.
Obama said of Quinton:

In a city with countless stories of unthinkable courage and resilience over the last year, there are some that still stand out – especially on this day. By now, most of you know Joplin High senior Quinton Anderson, who’s probably embarrassed that someone’s talking about him again. But I’m going to talk about him anyways, because in a lot of ways, Quinton’s journey has been Joplin’s journey.
When the tornado struck, Quinton was thrown across the street from his house. The young man who found him couldn’t imagine that Quinton would survive such injuries. Quinton woke up in a hospital bed three days later. It was then that his sister Grace told him that both their parents had been lost to the storm.
Quinton went on to face over five weeks of treatment, including emergency surgery. But he left that hospital determined to carry on; to live his life, and to be there for his sister. Over the past year, he’s been a football captain who cheered from the sidelines when he wasn’t able to play. He worked that much harder so he could be ready for baseball in the spring. He won a national scholarship as a finalist for the High School Football Rudy Awards, and he plans to study molecular biology at Harding University this fall.
Quinton has said that his motto in life is “Always take that extra step.” Today, after a long and improbable journey for Quinton, for Joplin, and for the entire class of 2012, that extra step is about to take you towards whatever future you hope for; toward whatever dreams you hold in your hearts.