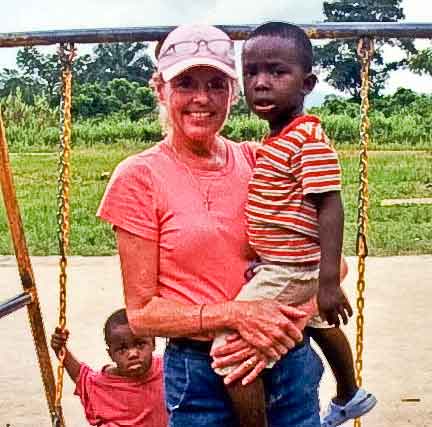 Church member dies from malaria after trip to Ghana

Peggy Good holds a child at Eugemot Orphanage in eastern Ghana. (Photo from the Huntsville Times)

The Huntsville (Ala.) Times reports today on the death of Peggy Good, a schoolteacher who made regular mission trips to Ghana.
She was a member of The Light, a Church of Christ in Huntsville. (I haven’t been able to find a church website for more information.) A memorial service is scheduled Aug. 7 at 2 p.m. at Monrovia Church of Christ in Madison, Ala.
She made regular trips to Eugemot Orphanage in Hohoe, a town in eastern Ghana near the Togo border. I regret that I am not familiar with this work. The Times reports:

A large chunk of that joy came from Good’s work in Africa, said her friend, Janet Yeager, who accompanied Good on her first trip to Ghana in 2005. Both are members of The Light, a Church of Christ congregation that supports the Eugemot Orphanage there.
“That was such a turning point in her life,” Yeager said. “She’d become discouraged with teaching. She was doubting herself, doubting her effectiveness. It was a very difficult time for her. She really didn’t know what her purpose would be.”
The children crowded around the tall, blonde American, magnetized by the love she radiated. Yeager watched her friend, encircled by the adoring children, remember her own.gif?Action=thumbnail&Width=460&algorithm=proportionalts.
“She just blossomed,” Yeager said. “It was like she was being re-born into teaching. What they gave to her, they’ll just never know.”

Good contracted a dangerous form of malaria in Africa about five years ago. The illness resurfaced recently and resulted in organ failure.
One lesson from this tragedy for all of us who make trips to Africa is to not ignore symptoms — even after we’ve returned home. The Times reports:

Part of the maliciousness of malaria, particularly of plasmodium falciparum, the most lethal form that Good had, is that those with it often don’t feel so bad at first, said Dr. Mohamad Abbas, the local infectious disease specialist who treated Good.
“If there is a lesson to be learned from this tragedy, it is that malaria can be a fatal disease,” Abbas said. “After traveling back home, if people feel ill, they should not delay seeking medical treatment. Most tropical diseases present (begin) with very non-specific symptoms – like just feeling tired, running a low fever.”