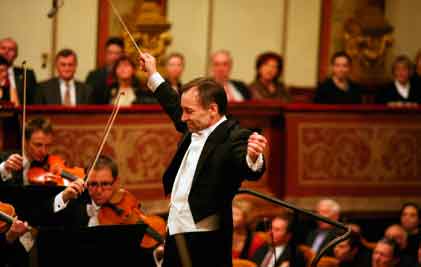 Maestro Boguslaw Dawidow, a Polish Christian, is touring the U.S. for three months along with the orchestra he conducts — Opole, the National Philharmonic of Poland.
On March 3 Opole performs at Armstrong Auditorium in Edmond, Okla. (On Feb. 28, a few tickets were left for the performance)
Dawidow is a member of a family with deep roots in Churches of Christ in Poland, as we reported in 2005. In January we reported on the death of 29-year-old Mikey Dawidow, the the son of longtime missionaries in Sopot, Poland, Mike and Molly Dawidow. Mike is Boguslaw Dawidow’s brother.
Another brother, Marek Dawidow, served as a longtime missionary in Warsaw, Poland, and currently preaches for a Church of Christ in Clinton, Ark.