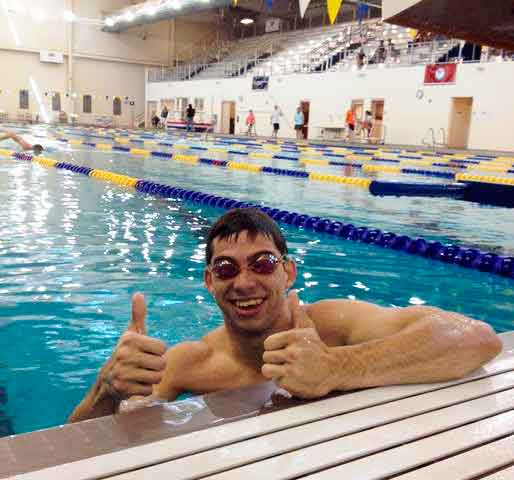 Evan Austin, a member of the Eastside Church of Christ in Terre Haute, Ind., is one of 14 swimmers competing for the U.S. in the 2012 Paralympics in London.
WTHI in Terre Haute reports:

Evan Austin is all smiles after a qualifying swim for the Paralympics. (Photo via www.wthitv.com)

Former Terre Haute South swimmer Evan Austin has made the United States Swim team for the 2012 Paralympic Games in London, England.
The games will be held August 29 through September 9 following the Olympics in the same city.
Over the last several days, Austin competed in the trials in Bismarck, North Dakota, breaking 11 American records for his classification.

Read the full story.
The Paralympics is an international, multi-sport event where athletes with physical disabilities compete. The games take place in the same city that hosts the Olympics. This year’s Paralympic games are from Aug. 29 to Sept. 9.
Austin, who studied and trained at Indiana State University, and his family are dedicated members of the Eastside church, friends told The Christian Chronicle.