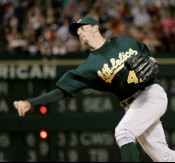 Bobby Ross Jr.
Brad Ziegler is off to the best start of any pitcher in Major League Baseball history.
The Oakland reliever, a member of the East Grand church in Springfield, Mo., broke a 101-year-old major-league record Sunday when he recorded six outs with no runs allowed in the Athletics’ 6-5 win over Texas.
The 28-year-old right-hander extended his scoreless streak to start his career to 27 innings, eclipsing the previous mark of 25 innings set by Philadelphia Phillies right-hander George McQuillan in 1907.
Greg Ziegler, minister of the 125-member Odessa, Mo., church, and his wife, Lisa, watched their son’s feat on television.
“He did it about 10 minutes before we had to leave for church,” Lisa Ziegler said with a laugh. If he had waited any longer, she joked, “I think we might have had to just bring the church to our house.”
“It’s been fun,” she said of the record-breaking start to her son’s career. “He’s just been very, very blessed.”
Brad Ziegler grew up in the Odessa congregation, east of Kansas City. His father has preached there since finishing Sunset International Bible Institute in Lubbock, Texas, about 25 years ago.
Greg Ziegler described his son as a young man of strong faith who “wants to be a positive influence for the Lord.”
The father said his son’s scoreless streak has surprised him more than his success at the major-league level.
“I think he’s been capable for a number of years now,” Greg Ziegler said. “He’s just finally got the opportunity.”
Brad Ziegler kept two balls from his outing Sunday but planned to send the rest — along with a pair of his shoes and a hat — to the Hall of Fame, The Associated Press reported.
“I don’t know if that’s something I’d ever thought I’d have to do as long as it wasn’t a real embarrassing moment or someone else’s highlight, but it’s pretty incredible,” Ziegler told AP. “It’s real special. I feel like I’ve worked real hard to get here. Thankfully it’s not over yet. Hopefully we can keep it going.”
Oakland called up Ziegler, a former standout at Missouri State, from Triple-A Sacramento on May 30. He was 2-0 with eight saves and a 0.37 earned run average at Sacramento this season. In 24 1/3 innings, he allowed only one earned run.
This is Ziegler’s fifth season in pro baseball. He was drafted by Philadelphia in 2003, but released and pitched briefly in independent ball in 2004 before signing with Oakland, according to the Springfield News-Leader.
“He’s been a fan favorite everywhere he’s been – college and pros,” Doug Dunn, a friend who was active with Ziegler in the campus ministry during their time at Missouri State, told The Christian Chronicle.
Brad Ziegler and his wife, Kristi, have an 8-month-old daughter, Kaylin.