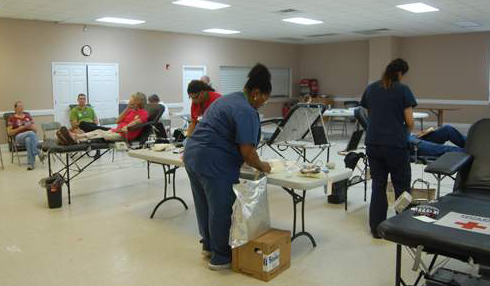 North Broad Street Church of Christ in Albertville, Ala., has hosted regular blood drives since 1985.
Laura Akins
The Gadsden Times in Alabama reports:

For the past three decades, twice-a-year American Red Cross blood drives have been a constant at North Broad Street Church of Christ.

The church on Tuesday began its 31st year of those drives. They usually are held at the end of June and between Christmas and New Year’s Day. This year’s summer drive was later than usual, however, because of a technical glitch.

Church member Tony Simmons has served as the drive coordinator since the beginning, and also has been a regular donor.

“I’ve given more than 13 gallons (104 units),” Simmons said, explaining that he first donated blood during his freshman year at Northeast State Junior College in Rainsville, nearly a half-century ago.

Simmons said there is a special need during the summer since no drives are held because school isn’t in session and industries are often closed down for a week or two at a time. Schools and industries are regular sponsors of blood drives.

“We have this (summer) drive to make up the slack,” Simmons said. “Every drive is special; you can’t artificially create blood.”