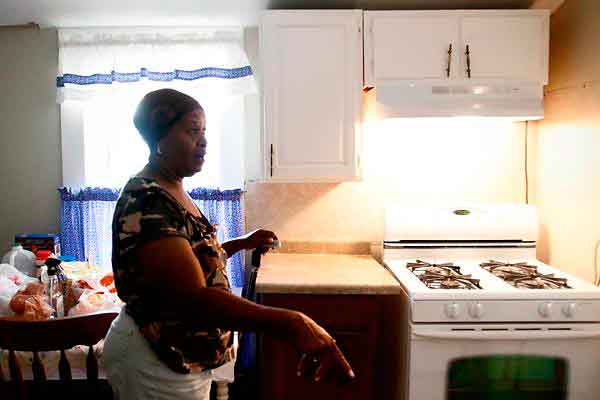 Angelene Dixon shows off renovations in her mother’s home from an “extreme home makeover” by the Boone County Council on Aging and Fairview Road Church of Christ. (Photo via www.columbiamissourian.com)

The Missourian in Columbia, Mo, reports:

It didn’t matter that Ty Pennington was nowhere to be seen or that shouts of “Move that bus!” weren’t heard. Columbia senior Hildred Catherine Henderson still received an unofficial “extreme home makeover” on July 30.
About 130 volunteers devoted 1,500 hours to the project, which is the third annual collaboration between the Boone County Council on Aging and the Fairview Road Church of Christ to improve houses in the Columbia area.

It’s not the first time the Fairview Road church has helped with a home makeover project. In 2009, Brian Hajicek, the church’s preaching minister, wrote a piece for The Christian Chronicle about a similar project his congregation did for a mother of 12.
Angelene Dixon, Henderson’s daughter, said the church’s latest effort “was like a miracle.”

Dixon said the volunteers were always concerned about her family’s preferences and would often ask questions like, “What’s your mother’s favorite color?” and “Will she like this?”
Hajicek said when he asked Dixon if church members could start or add another aspect to the project, she would ask him, “Brian, are you trying to make me cry?”
Special relationships between volunteers and Henderson’s family developed during the working days.
“I overheard church members talking about, ‘I’ll come back and check on this for you,’ or, ‘I’ll come back because I want you to meet my wife,’” said Amadi Swartz, volunteer coordinator for the Council on Aging.
Dixon had similar sentiments.
“Afterwards, I just felt like I have an adoptive spiritual family. Everybody was so awesome,” she said. “I’m getting chills talking about it.”