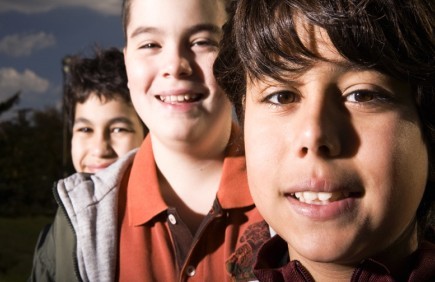 Bobby Ross Jr.
ESCONDIDO, Calif. — Damaris Romanillo, the American-born daughter of Mexican immigrants, feels equally comfortable praising God in Spanish or English.
The 17-year-old high school senior worships in both languages at the North County Church of Christ, a growing congregation north of San Diego.
Many Sundays, she attends one of two English services, which draw a combined 500 worshipers. Then she joins her parents — and 250 other souls — in a Spanish assembly.
Other times, she helps with children’s Bible classes — all integrated and featuring “team teaching” by English and Spanish speakers.
“Whenever there is a situation, I translate and I help out, so we can be one big family,” said Romanillo, a children’s ministry intern.
At many churches, the Hispanic ministry occupies a back room or meets in the afternoon after the English assembly, said Daniel Rodriguez, associate professor of religion and Hispanic studies at Pepperdine University in Malibu, Calif.
Not so at the North County church, which aims to break down barriers that can divide Hispanic and Anglo members — even those who meet under the same roof.
“It’s arguably the healthiest Hispanic ministry we have in the Churches of Christ and one of the largest,” Rodriguez said.

NO SECOND-CLASS MEMBERS
The nation’s fastest-growing minority group, Hispanics make up about 15 percent of the U.S. population, according to the Census Bureau. However, less than 4 percent of Churches of Christ across the nation serve Spanish speakers, according to the 2009 edition of Churches of Christ in the United States.
About 270 English-speaking churches in the U.S. provide a Spanish assembly, according to the directory, published by 21st Century Christian in Nashville, Tenn.
An additional 200 congregations offer only Spanish services.
At the North County church, which meets in a renovated fitness center next to a park where homeless people sleep, English- and Spanish-speaking adults all enter — and leave — through the same doors.
Their children all attend Sunday school classes together.
“This means the building is crazy and amazingly crowded right before the 10:30 a.m. service,” senior minister Tim Spivey said. “You hear multiple languages being spoken, and the church’s diversity is most obvious.”
Despite different cultures — illustrated by a Monday night boxing ministry that draws mostly Hispanics — the English and Spanish speakers enjoy regular combined worship assemblies, fellowship meals and events such as campouts, Spivey said.
“When there’s a meal and the Spanish are cooking carne asada (grilled strips of steak), oh man, the whole church will show up,” said Merry McDuff, children’s and junior high minister. “The Mexican food is the best. That’s very unifying.”
North County leaders work to avoid any perception, real or imagined, of the Spanish speakers as second-class members, said Manuel Magos, who started the Hispanic ministry in 1987.
In fact, the recently renovated Spanish worship center is “by far nicer” than the one where Spivey preaches in English, he jokingly complains.
“We’re one body with two languages. That’s been emphasized quite a bit,” said minister Raye Kramar, who works full time with the Hispanic ministry, along with Magos. Kramar and Magos also serve as two of the congregation’s five elders.
At one time, the Hispanic members would partake of the Lord’s Supper and sing in an English assembly, then go to another room for a Spanish sermon and Bible class, Magos said.
However, as the Hispanic group grew, Magos said, “We asked, ‘How are we going to raise up leaders if the English (speakers) are doing all the work? So, we started having our own service.”
Now, several Spanish speakers, including Romanillo’s father, Jose, serve as deacons.
The separate Spanish assembly recognizes the needs of first-generation immigrant adults who may have trouble with English, Kramar said.
But immigrant children learn English quickly, most becoming fluent within their first year in an American school, he said.
“What happens is, if you treat the kids separately, then the Spanish kids never really do acculturate, not even in the church life,” Kramar said. “So we try to put them together immediately.”
That means merging all the children’s Sunday school and Wednesday night classes — and the junior high and high school youth groups.
“When they’re young, they don’t even notice the cultural differences. They’re just friends with each other,” McDuff said. “But with each year that they continue in school, I think society tends to pull them apart into their own cultures.
“So by the time they’re in junior high and especially high school, if we haven’t as a church done something to help solidify their friendships, it’s going to be hard to have an integrated church.”
‘A SEAMLESS TRANSITION’
About 85 miles north of Escondido, the Inland Valley church in Ontario, Calif., takes the “one body” approach a step further.
All 100-plus members — about a third of them Hispanic — meet together, with headsets used to translate the English sermons into Spanish. As with North County, the children’s Sunday school classes also are combined.
In the worship assembly, one screen shows Scriptures and hymns in English. Another screen provides the Spanish translations.
The weekly bulletin is printed in both languages.
“We are one congregation fully integrated,” said Tom Allen, the church’s bilingual, Bolivian-born minister.
Asked if he would advocate the Inland Valley church’s model over that used by North County, Allen replied that each congregation proves the blessings that occur when English and Spanish speakers come together.
“The one model that I don’t think is a good one is when the church is just Hispanic,” he said. “Those churches are losing their teenagers because their first choice is English.”
A bilingual approach makes sense because immigrant children segregated into Spanish-only classes often leave the church as adults, said Rodriguez, author of “Becoming All Things to All Latinos,” a 2008 study that examined the church attendance practices of U.S.-born Hispanics.
“Eventually, they grow away from their immigrant parents, but they don’t grow toward the dominant (English-speaking) church group,” Rodriguez said.
“At North County, they know they’re going to have second- and third-generation Hispanics who aren’t going to feel comfortable in Spanish,” he said. “And they want a place where there’s a seamless transition.”
Romanillo’s parents were converted and baptized at the North County church when she was a baby.
It’s the only congregation she’s ever known — and that’s just fine with her.
“We’re always welcoming people, whether it’s in English or Spanish,” she said. “We both have visitors’ booths. We’re always here to answer your questions. There’s no language barrier here.”