UPDATE: Another member of a Church of Christ perished in the duck boat tragedy. Ray Coleman, 76, an usher for the Kingsley Terrace Church of Christ in Indianapolis, died along with eight members of his family. See our related coverage.

A deacon of a Church of Christ in Arkansas and his son are among the 17 people who died Thursday in the tragic sinking of a duck boat in Missouri.

Steve Smith and his family worshiped with the Osceola Church of Christ, which meets in a town of about 7,000 on the banks of the Mississippi River, about an hour north of Memphis, Tenn. The family was visiting the Branson, Mo., area and exploring the attractions, including nearby Table Rock Lake. 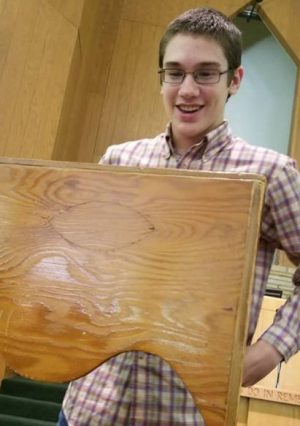 Lance Smith leads a devotional for the Osceola Church of Christ.

Smith, his son Lance and daughter Loren boarded an amphibious duck boat for a ride on the lake. Smith’s wife, Pam, opted to stay behind.

The boat, carrying 31 people, encountered strong winds from a storm that raced across southwestern Missouri earlier in the day, according to news reports. Witnesses say the boat took a nose dive and capsized.

Seventeen people drowned, including Steve and Lance Smith. Loren Smith survived and was transported to a hospital with her mother, a member of the Osceola church told The Christian Chronicle.

“This family in particular has been our best friends, and Lance is like a son to me,” Hester told the Chronicle. “In fact, my wife took Lance, Loren and Pam to Disney just this spring break.”

In a prayer request posted on social media, the minister said, “This past Sunday I finally was able to get Lance to do a devotional and break out of his shell. … He was the perfect example of humility and compassion. He cared about everyone.”

The church has an average attendance of 35 to 40, Hester said, and its members are a tight-knit family. Right now he’s struggling with what to say to them on Sunday.

“I’m certain our services will not be like normal,” he said, “because our whole church is so close.”

#BREAKING: 2 Arkansans died on the duck boat in Branson. According to church members’s Facebook posts, Steve Smith and Lance Smith, 15, are from Osceola. This is a picture of Lance at the pulpit that’s circulating on social media. pic.twitter.com/WYUkHckUvm

Look for updates here as they become available.

‘We’re not giving up’

Amid fires, gunshots and chaos, an Alabama mission team prayed…