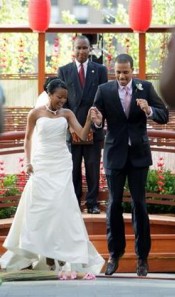 Joy McMillon
When LaDonna Bradford watched the NBC “Today” show as a child, she told her mother that she wanted to get married on the “Today” show someday.
“Someday” arrived last month.
LaDonna , 24, and her fiancé, Darnell Suggs, 25,  were married  live on June 25 on New York City’s Rockefeller Plaza, after being chosen as winners of the ninth “Today” show’s contest:  Race to the Altar.  Both are members of the Church of Christ and attend the West End church in Atlanta.
The couple decided to enter the contest during the early stages of their wedding planning.
“We got so frustrated this spring trying to plan our wedding with how expensive it was going to be,” said LaDonna, a nuclear reactor inspector for the U.S. Nuclear Regulatory Commission. “We wanted all our family and friends to be there.”
The couple won the hearts of American viewers in a series of fun, competitive challenges for the chance to tie the knot  on the television show and win an all-expenses paid wedding, reception and honeymoon. The Atlanta residents — both engineers — drew more than a quarter million votes, outdistancing the other four finalist couples.  They send out dozens of e-mails to friends, college classmates and alumni associations, requesting their votes.
The contest required them to fly back and forth from their Atlanta homes for their weekly appearance and competition.
“Our jobs and bosses were very supportive,” said LaDonna. So was their city. Stories about their efforts were carried in all the local media outlets. Baseball’s Atlanta Braves featured them one night, putting them on the big screen in the stadium and asking everyone to vote for them on their cell phones.
Following tradition, Today viewers planned the details of the finalists’ wedding and the honeymoon.
Bradford wore a silk, strapless dress designed by Priscilla of Boston, and the groom wore formal navy attire by Hugo Boss.  A jewelry store furnished the couple’s rings and also loaned the bride 10-carat diamond stud earrings, a 50-carat diamond necklace and a 20-carat diamond bracelet.
Willie Butler of Sugarland, Texas, Bradford’s former minister at the Tuskegee, Ala., church, where she grew up, conducted the service for the couple.  Butler baptized Bradford when she was 8 years old. Her grandfather Jackson C. Summers escorted her down the aisle.
Suggs told his bride he wanted them to “live according to God’s will and try to love each other as much as God loves us.” He was baptized last year after several Bible studies with LaDonna and the West End minister, Orpheus Heyward.
“I was standing there in tears when he responded to the invitation,” said LaDonna.
Attorney Fred Gray of Tuskegee,  Ala.,  reminded the bride he had had the opportunity of watching her grow and develop from birth.  “LaDonna, your home church, the Tuskegee Church of Christ, joins me in wishing both of you all of the blessing which God has in store for you.”
More than 170 of their closest friends and family members from Alabama and Georgia attended the ceremony and reception. Friends of Suggs’ grandmother, who lives in assisted living apartments  in Columbia, Md., dressed up for the occasion so they could watch  the nuptials on television, said the groom, a 2005 graduate of Florida A&M University.
After reciting their own vows, the newly weds jumped over a broom, a popular African American wedding tradition hearkening back to slavery.
“It symbolizes  the joining of two families, sweeping the past away and looking forward to a brighter future together,” said LaDonna.
Following the ceremony, the wedding party moved to the Rainbow Room on the 65th floor of Rockefeller Center.  The couple was celebrated by a surprise guest—Bradford’s cousin and “American Idol” finalist —Melinda Doolittle.
During their week-long honeymoon aboard a yacht and the Bora Bora resort in the South Pacific islands, they snorkeled, and kayaked. They will be appearing on the “Today” show later this summer with a video recap of their travels, LaDonna said.
They plan on continuing their professional careers and having children in a few years. Meanwhile, they have returned to work and are settling into their Atlanta condominium With time to reflect on their extraordinary experiences, LaDonna says she is thankful that sometimes dreams really do come true.
IN HER OWN WORDS:
HOW THEY MET:
“We found each other amidst 17,000 of our peers at the National Society of Black Engineers in Boston in 2005 …  I was lost and he helped me find my way. After our first date that week, we carried on a long distance courtship from Pascagoula, Miss., to Tucson, Ariz., for a year and a half..  Late-night telephone calls, e-mails and texting and visits to one another kept us close.”
WHERE HE PROPOSED:
“Early in 2007 he told me he was planning a special trip for the two of us to celebrate my birthday.  He wouldn’t tell me the details other than to get a passport. …As our departure approached he revealed that we were going to Egypt. … The scenery at the Great Pyramids and Sphinx at Giza was breathtaking.  I turned around, and there he was on bended knee with a proposal. … I was overcome with emotion. … The pyramids symbolize exactly what we share; they’re strong, can weather any storm, and have stood the test of time over countless years, and that’s exactly how we plan to share our lives together.”
HOW THEY ENTERED THE NBC CONTEST:
“We filled out the application and sent in our required one-minute video.  It was a spoof of the Today show—the Tomorrow show.  I was LaDonna Vieira, and Darnell was Darnell Lauer.  We talked about ourselves in the third person as this ‘wonderful couple’ in Atlanta that wanted to get married on the “Today” show.  Then we cut away to our engagement video which our tour guide in Cairo had shot.  We also put in out takes of our filming this one-minute video, which took about eight ours to produce.”