In 22 years with The Christian Chronicle, Lynn McMillon has accrued a wonderful list of accomplishments. Lynn and Joy McMillon have served The Christian Chronicle since the mid-1980s.

After his many years of service, Lynn has notified the Chronicle’s board of trustees that it is time to begin a transition for leadership of the publication.

Over the next nine months, Lynn will step down from his role as president and chief executive officer as the board seeks an individual to take the Chronicle to the next level, using Lynn’s tremendous contributions as a strong foundation.

Related: The Christian Chronicle is searching for a new Chief Executive Officer

He joined the staff of this publication in 1996 as general manager alongside publisher J. Terry Johnson and editor Bailey McBride. In 2006, he took on the role of president and editor while continuing his full-time roles as chair and Distinguished Professor of Bible at Oklahoma Christian University and as an elder of the Memorial Road Church of Christ in Oklahoma City.

He stayed in the role of president as Erik Tryggestad became editor of the paper in 2013.

We on the Chronicle’s board are deeply appreciative of Lynn’s service. He has brought the publication through financial crisis and has stewarded the growth of our donor base and advertisers, to whom we owe great gratitude for believing in our mission.

Lynn assisted Oklahoma Christian University’s executive committee in building a dedicated board for the Chronicle. He led us through the emergence of our online publication and has grown the readership of our print edition.

We are aware of the challenge of running a publication and media nonprofit in today’s world, and we thank Lynn for his steadfast perseverance in ensuring the Chronicle is not only solvent, but also thriving.

Among Lynn’s achievements is the excellent team of reporters and staffers he has helped build.

He has taken the Chronicle from more than $800,000 in debt to sound financial footing. 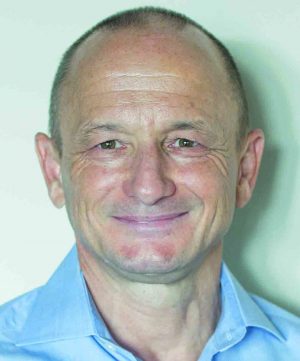 Deon Fair | To our readers

Lynn’s wife, Joy, deserves our profound thanks, not only for supporting him in this work, but also for serving the Chronicle since 1982 in a variety of roles — managing editor, correspondent, administrative assistant — and helping with whatever needs to be done.

We know that for both McMillons, the Chronicle is a labor of love.

Please join us in thanking Lynn and Joy for their exceptional service to the Chronicle and the fellowship of the Churches of Christ.

Deon Fair is chairman of The Christian Chronicle’s board of trustees. He worships with Christians at Richardson East (CareChurch), a Church of Christ in Richardson, Texas.