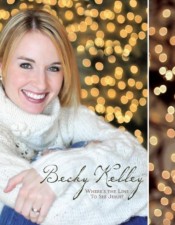 Bobby Ross Jr.
Two years ago, Becky Kelley’s young nephew was waiting to see Santa Claus at a shopping mall.
“Where’s the line to see Jesus?” Spencer Reijgers, then 4, asked his aunt.
Kelley, a member of the McKnight Road Church of Christ in St. Louis, told her father, Steve Haupt, about his grandson’s question.
Haupt, a McKnight Road church elder and business owner with a background as a pianist, took the idea and wrote a song that starts like this:
Christmas time was approaching. The snow is starting to fall. Shoppers choosing their presents. People filling the mall. Children waiting for Santa with excitement and glee. A little boy tugged my sweater, looked up and asked me, “Where’s the line to see Jesus? Is he here at the store? If Christmas time is his birthday, why don’t we see him more?”
Becky Kelley, a graduate of Lipscomb University in Nashville, Tenn., recorded a professional version of the song. A YouTube video of it has gone viral with 1.6 million views — and counting.
“I’m blown away,” Kelley told the St. Louis Post-Dispatch. She said she was spending three hours a day answering fan e-mails and fielding calls from radio stations.
Haupt said he first felt flattered that people liked the song and then excited that it could be a hit.
“That’s evolved into being humbled that God would give me a message like this that’s affected so many people,” he told The Christian Chronicle. “I feel like just a messenger from God. What are the odds of my grandson saying it, my daughter relaying it to me and then me writing a song about it?”