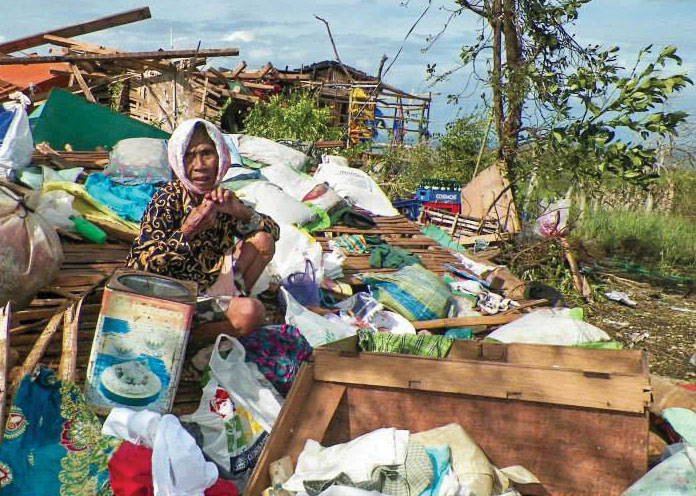 CHURCHES OF CHRIST across the Philippines and around the world face the aftermath of Typhoon Haiyan,

Erik Tryggestad
President and CEO
Relieve. Rebuild. Restore. Renew.
Those are the goals of Churches of Christ — across the Philippines and around the world — as they face the aftermath of Typhoon Haiyan, one of the most destructive storms in Southeast Asia’s history.
As representatives of church-supported nonprofits in the U.S. gathered around tables to ponder effective relief strategies, Filipino Christians buried their dead and picked through the remains of their humble homes.
“Even if we lost everything, still we are thankful because God has spared our lives,” said Marivic Andales, a few days after the typhoon made landfall Nov. 8.
Jefferson Cal, a self-supported Filipino minister, interviewed and filmed Andales as she surveyed the barren plot of land where her house once stood, on the northern tip of the island of Cebu.
“We thought we were going to die that day,” she told the minister. “But God has spared our family. All of my children are alive — even myself and my husband.” 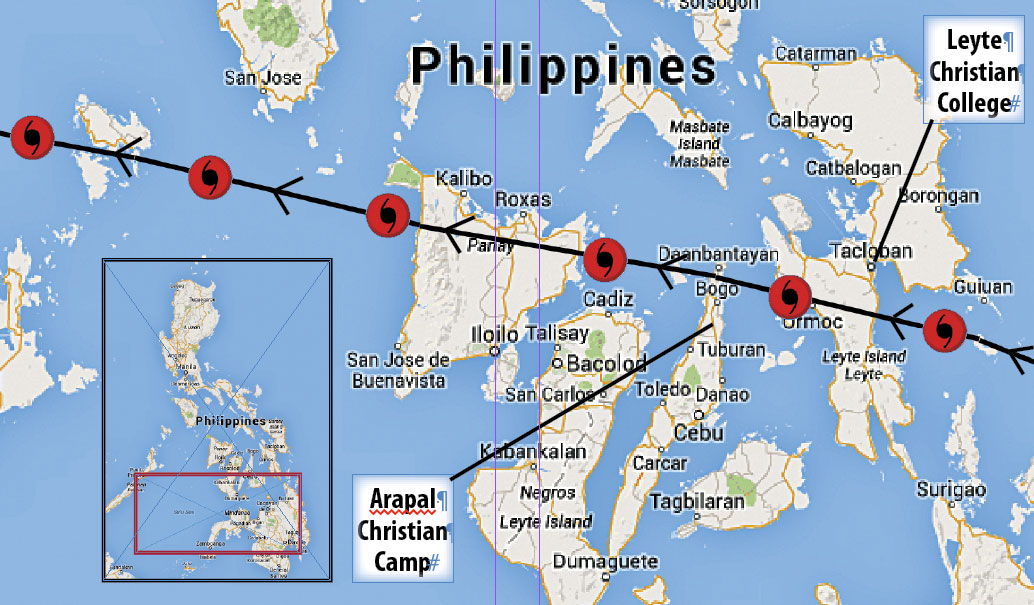 The path of Typhoon Haiyan/Yolanda (GRAPHIC BY ERIK TRYGGESTAD)
The super typhoon, known as Yolanda in the Philippines, was equivalent in strength to a Category 5 hurricane.
As it smashed across the central islands of the Philippines, the storm claimed more than 3,600 lives — mostly in the country’s Eastern Visayas region — and injured more than 12,000 people.
It was the second-deadliest storm on record in the Philippines, a country that seems to be pounded routinely by tsunamis, earthquakes and floods.
The Philippines ranks third on a list of the world’s most disaster-prone countries, behind the South Pacific nations of Tonga and Vanuatu, according to a study by environmental groups.
The country also has the highest number of Churches of Christ in Southeast Asia. The nation of nearly 95 million souls, spread across 7,107 islands southeast of China, is home to more than 1,000 congregations and at least 20 ministry training schools, said Salvador Cariaga.
Cariaga, a native Filipino evangelist who splits his time between his family in Texas and his homeland, was in the U.S. when the storm hit.
“Lost all our buildings in Arapal, but glad no lives were lost — just goats, but not the dreams,” he posted to Facebook just hours after the storm passed. 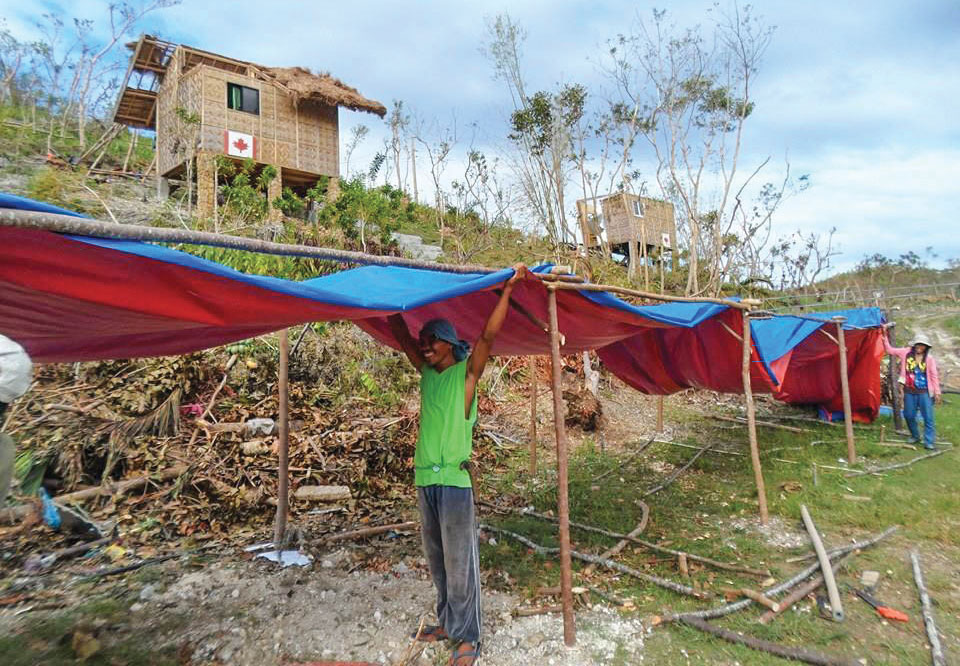 At Arapal Christian Camp, badly damaged by the storm, workers set up tents to shelter the homeless in their community. (PHOTO BY GERALD BANARES)

Since 2006, Cariaga and fellow church members have overseen Arapal Christian Camp, a 100-acre sustainable agriculture community in northern Cebu, which took a direct hit from the storm.
In the Dallas area, representatives of church-supported ministries and nonprofits gathered to discuss an effective, coordinated response to the disaster.

“If we do not plan this relief work purposefully, we could use up all of our resources in a 10-foot radius,” Cariaga said at the meeting. 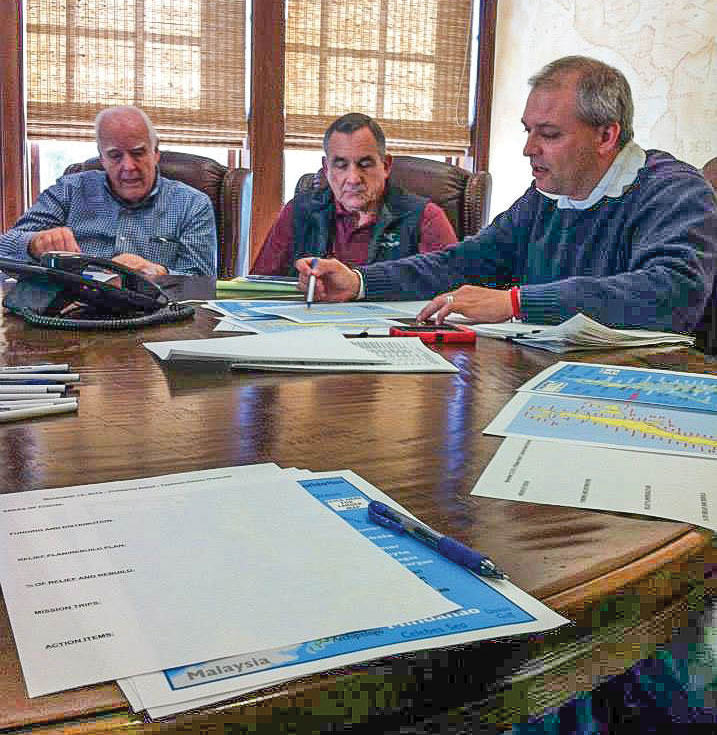 Dr. John Bailey of Body and Soul Ministries, Chris Gingles of Healing Hands International and Bobby Moore of Christian Relief Fund meet at the offices of the Caris Foundation in Colleyville, Texas, to discuss relief. (PHOTO BY SALVADOR CARIAGA)

“Our future efforts will be to help rebuild the lives of the orphans that this storm has created,” said Bobby Moore, vice president of global operations for Christian Relief Fund.

“But there are still victims of the storm that need our immediate prayers, food, water, medical care and shelter,” he added. “This relief cooperative ensures that our donors’ funds are effectively utilized.”

Chris Gingles, vice president of Healing Hands, said, “If all of us can work together, we will show an even bigger example of the love and compassion of God to the people of the Philippines.”

As they wait for aid to arrive, church members in the Philippines mourn the souls lost to the storm — and pray for those still missing.

In the city of Tacloban on the island of Leyte, nearly 30 students at Leyte Christian College survived for a week after the storm hit with little drinkable water.

Now relocated to Lapu-Lapu City on the island of Mactan, the students are recovering from the experience. Cal, the minister who interviewed storm victims in Cebu, traveled to the island to offer aid and collect eyewitness accounts from the students.

In a video produced by Cal, Nino Domingo huddles over a plate of food as he talks about the days they spent wandering the streets of Tacloban from 6 a.m. to 10 p.m. in search of relief supplies, passing dead bodies.

In the background, Filipinos sing karaoke, yelling “There’s gonna be a heartache tonight” from an old song by the Eagles.

“Please do not lose hope … God is with you. Help is on the way.”

Nino Domingo, student at Leyte Christian College, stranded for a week after the typhoon

“Everything around us was destroyed,” Domingo says. “It was so terrifying.” Despite the horror he witnessed, “I think God is reminding us of something. Perhaps he is reminding us to trust him more and more because he is the only reliable source of help.”

Cal then asks the young student if he has any words for the people still struggling to survive on the island of Leyte.

“Please do not lose hope,” Domingo replies. “Just hang on there. God is with you. Help is on the way.”

TO CONTRIBUTE TO RELIEF, contact the following ministries. (If your church or ministry is collecting funds and is not listed here, please send us an e-mail.) 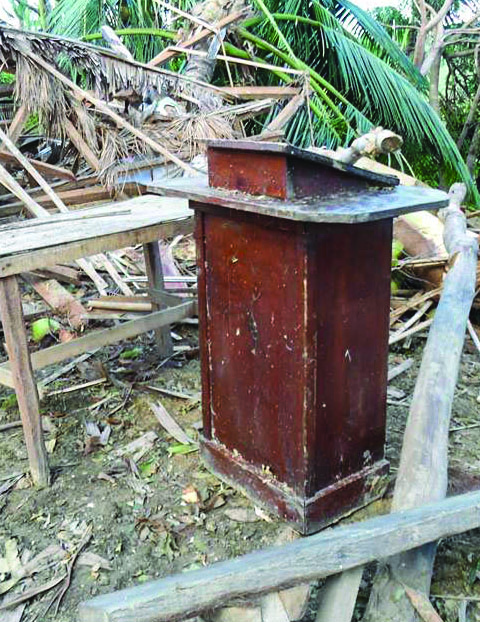 The meeting place of a Church of Christ in northern Cebu is in ruins. (PHOTO PROVIDED)

• Shepherd’s Hill International (also known as Give A Goat),