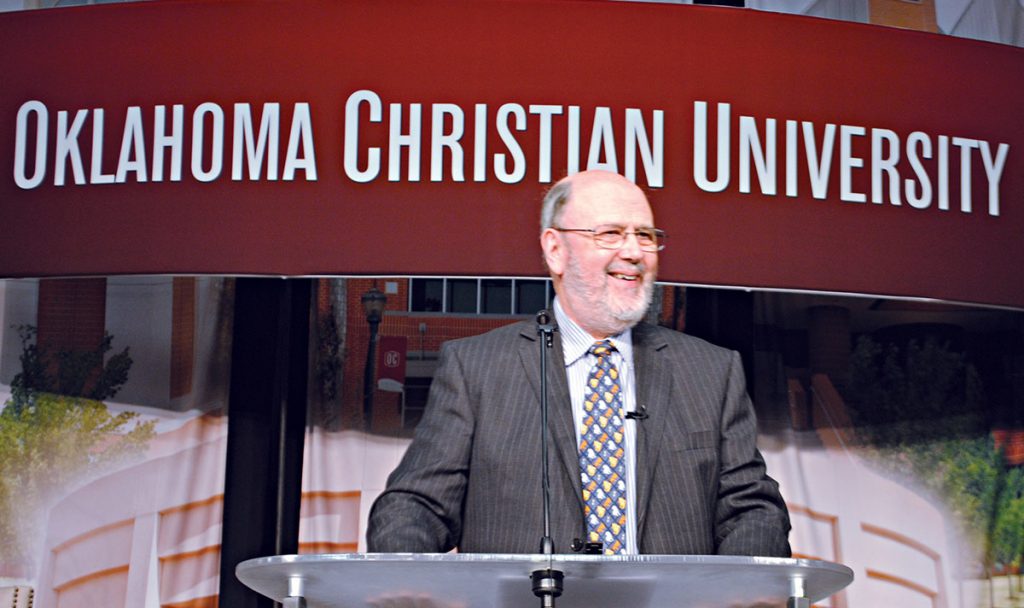 Christians must ‘be the Good News in the present’

AUTHOR, THEOLOGIAN N.T. Wright discusses threats and challenges for followers of Jesus in a post-modern era.

Lynn McMillon
President Emeritus
Tom Wright doesn’t mind if people nod off while he speaks.
After all, the apostle Paul, whom the renowned Bible scholar often discusses, once preached so long that a man named Eutychus fell asleep and tumbled from a third-story window. Eutychus lived, the preaching continued, and the young church “celebrated the meal which speaks of the dying and rising of Jesus himself,” Wright wrote in his study guide Acts for Everyone

.
There were few, if any, bleary eyes as Wright addressed a crowd of 2,700 recently at Oklahoma Christian University in Oklahoma City. It was one of four speaking appearances in the U.S. during a tour promoting his latest scholarly work, “Paul and the Faithfulness of God.”
He discussed Pilate’s question to Jesus in John 18, “What is truth?” Wright told the audience that “truth is what happens when God speaks his Word.” It doesn’t come from Caesar, as Pilate believed, and “God’s truth is the new reality that is bursting in on Pilate’s world.”

In this second part of our interview, we present questions asked by The Christian Chronicle and topics discussed during Wright’s visit to Oklahoma Christian. Read part one online at www.christianchronicle.org.

How can we effectively communicate the Gospel to our generation?
The Christian message is not a theory. The Christian message is not advice. The Christian message is news.
That word is “Good News,” “Gospel.” That’s what it’s all about. And so many parts of our culture want to turn it back into just good advice. So when we look at the plural challenge of our culture, with their many questions about God, that’s good. We don’t simply teach with words; we do it with lives, and with prayer, and with love, and with generosity, with what many have been doing, with mission trips and service trips and so on.
Somehow we have to navigate all the good things that are here and make sure, in embracing those, we do so in a way which is about generosity, is about service, is about justice, which is about helping those less fortunate than ourselves.

What challenges do we face as we seek to share this Good News?
The post-modernists — like the modernists — want us to stop talking about Jesus. They want us to stop talking about the thing that actually happened in real time in this real world.
They want us to talk about, “Oh, here’s a religious experience you might have.” We have to go on saying no, something actually happened in history when Jesus of Nazareth rose from the dead. The world was called to account and God’s new world was born.
The challenge, then, for us — our vocational challenge today and in the rest of our lives — is to live between the news that happened then and the news that will happen at the end. It is the challenge for us to be the Good News in the present.
Globally, what serious threats does Christianity face?
There are, of course, well-publicized attacks on the Christian faith all over the world, especially from some extreme and violent, would-be Muslim groups (though most Muslims worldwide would reject such attitudes). This has been greatly exacerbated by the last 10 years of Western attacks on countries in the Middle East, which Muslim extremists have been easily able to portray as “Christians attacking Muslims” and thus appearing to justify a reaction.
At a much deeper level, the serious threats the Christian faith faces today are the result of the global power of the post-Enlightenment Western nations and the fact that the churches have so often failed to speak the truth to power within their own contexts. This is true of so-called “liberal” churches in one direction (watering down the faith to fit a modernist agenda) and of so-called “conservative” churches in another direction (offering a privatized and detached “spirituality” and “salvation.”)
As long as these continue, there will be as much undermining of Christianity from within its traditional heartlands as there will be attacks from outside.
How are you able to write for popular and scholarly audiences?
I have been fortunate to spend much of my life studying and teaching the Bible, and over the years I have developed various ways of explaining things, which have developed into lectures and seminars and so into books and articles.
For some reason, I seem to have a gift of producing words, sentences and paragraphs quite easily. I enjoy writing, as long as I’ve done the background reading and sorted out what precisely I want to say.
I have always enjoyed poetry (both reading it and, occasionally, writing it). A love of words and their rhythm has spilled over into my writing.
I don’t find much difficulty switching between the ‘popular’ and ‘scholarly’ writing. It all depends on having a picture in your mind of who you’re writing for, and making sure you are communicating with them and not going way over people’s heads when writing at a ‘popular’ level or missing out on key complex discussions when writing for scholars.

What is a favorite scripture?
One of my favorite passages in all of the Bible is Isaiah 11, which is the vision of the messianic kingdom, in which — under the rule of the kingdom — the wolf will lie down with the lamb, the cow and the lion will feed, a little child shall lead them and the earth shall be full of the knowledge of the Lord as the waters cover the sea.
How did the waters cover the sea? The waters are the sea. There’s a sense that God wants to drench the world with his own presence of love without stopping it from being itself — still being his creation and being itself.
This is the mystery of the Trinity, actually, that God makes a world that is other than himself in order to affirm and embrace it with his love.