At 20th anniversary of terrorist attacks, Christians in North Carolina, New York and across U.S. take time to reflect on the lives lost.

Hundreds of bluegrass fans converged on the rustic camp, about 60 miles north of Charlotte, to hear artists such as Scythian, Joe Mullins & The Radio Ramblers and His & Hers.

But before the banjos, mandolins and guitars took over the wooden stage — normally the camp dining hall’s front porch — the crowd paused to reflect on the 2,977 lives lost in the Sept. 11, 2001, terrorist attacks. 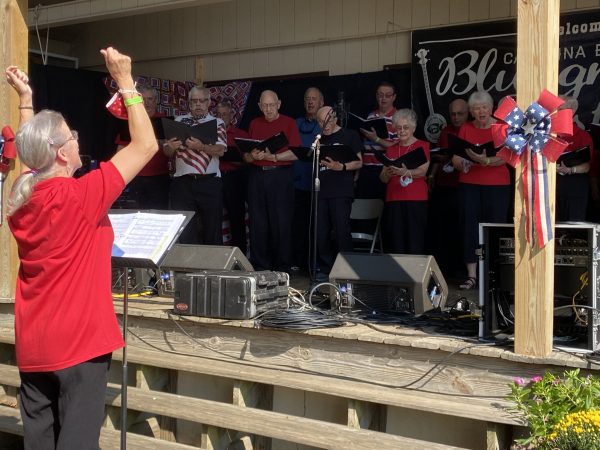 Laura Donovan directs the Wilkes Seniors on Stage in the singing of the national anthem.

“This is a very important day in our nation’s history — the 20th anniversary of 9/11,” Dennis Conner, minister for the Brooks Avenue Church of Christ in Raleigh, told attendees seated in folding chairs on the lawn. “We’re just blessed and thankful to God that we continue to enjoy our freedoms and the way of life that we have here.”

On a sunny day with high temperatures in the 70s, red, white and blue ribbons adorned hay bales and wooden planks as a group called Wilkes Seniors on Stage sang “The Star-Spangled Banner.”

Talitha Vickers, news reporter and anchor for WXII-TV in Winston-Salem, led the reciting of the Pledge of Allegiance.

Retired Gen. Roger A. Brady, who at one time commanded all U.S. Air Forces in Europe, told the crowd that every generation experiences a defining moment — be it the 1941 attack on Pearl Harbor for his parents’ generation or the 1963 assassination of President John F. Kennedy for his own generation.

“We talk about my parents’ generation … as perhaps the Greatest Generation, and I don’t dispute that at all,” said Brady, a member of the Brooks Avenue church. “We’re beholden to them, and we stand on their shoulders.”

But he praised the “9/11 generation” and the hundreds of thousands of men and women who volunteered for military service in an era with no draft. 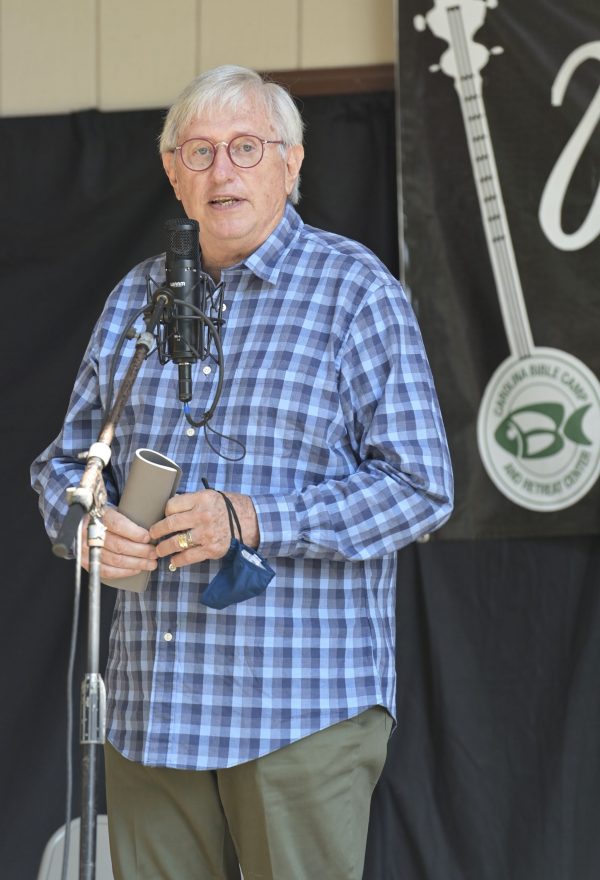 Brady recalled a husband and wife — both C-17 pilots — who had left active duty before Sept. 11.

After the attacks, they decided not to retire. 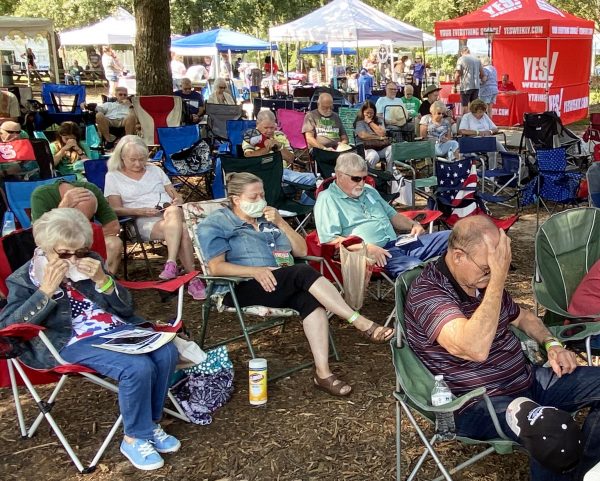 About 600 miles away in New York, 11 students from Harding University in Searcy, Ark. — all too young to remember 9/11 — visited the Sept. 11 memorial this week.

The students’ educational trip also included meeting the firefighters of Engine 54, Ladder 4, Battalion 9 in Midtown Manhattan. That firehouse lost 15 of its own on 9/11, the biggest loss in the New York City Fire Department.

“One of the most impactful experiences for me in the museum was hearing the voices of the friends and family members of those that died that day,” said Everett Kirkman, 21, a member of the Downtown Church of Christ in Searcy. “Reading a story about someone is one thing — and can be moving in itself — but hearing the tone, and the love in each person’s voice that spoke, was powerful.” 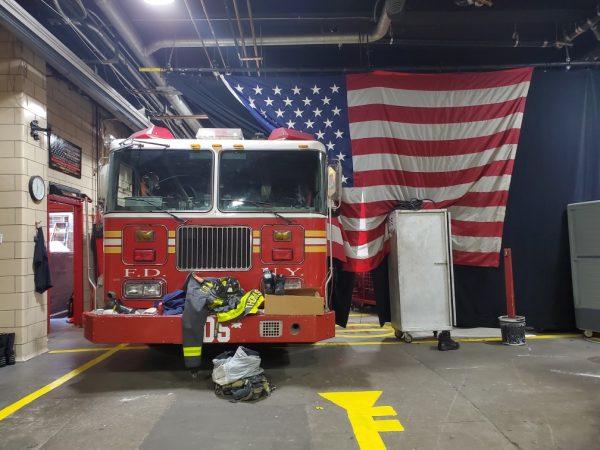 The firehouse of Engine 54, Ladder 4, Battalion 9 in Midtown Manhattan.

Sara McClaran, 20, whose home congregation is the A&M Church of Christ in College Station, Texas, said: “One of the most powerful things to me was hearing the messages of the passengers on the plane that went down (in Pennsylvania) — Flight 93. I have no doubt that each one knew they were going to die, and yet in their calls, there was no panic or terror or really much fear.

“Say a prayer for our land today and especially the families and friends who lost so much on 9/11. May God bless America.”

“There was just a calm certainty — a peace, if you will — as they made sure their family knew they were loved. Those passengers knew their fate, they accepted it, and they worked to make sure no one else died with them. Peace and courage like that is extraordinary.”

Like the students, millions across the U.S. — and around the world — solemnly marked Saturday’s anniversary.

“After 20 years let’s not forget,” David Shannon, president of Freed-Hardeman University in Henderson, Tenn., said on Facebook. “Say a prayer for our land today and especially the families and friends who lost so much on 9/11. May God bless America.” 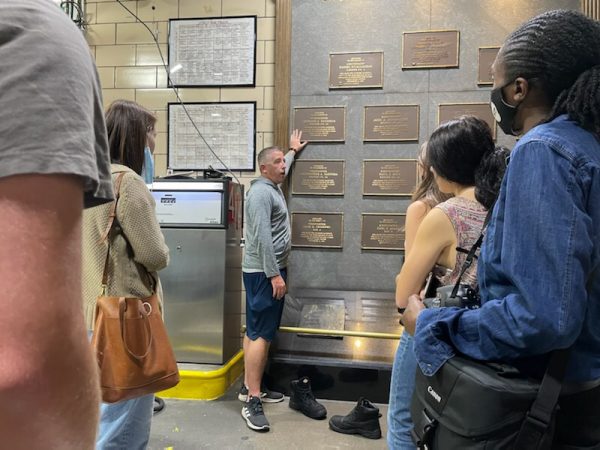 Harding students learn about the heroes of Engine 54, Ladder 4, Battalion 9 in Midtown Manhattan.

‘Too important a day to let go’

Back in North Carolina, Lisa Brewer, a member of the Wilkesboro Church of Christ, welcomed the return of the bluegrass festival, which she directs. The COVID-19 pandemic forced its cancellation last year.

Ticket sales for the outdoor festival raise thousands of dollars a year to support the Carolina Bible Camp and Retreat Center, which is associated with Churches of Christ.

Given the 9/11 anniversary, the festival offered free admission this year to military veterans, law enforcement and first responders. 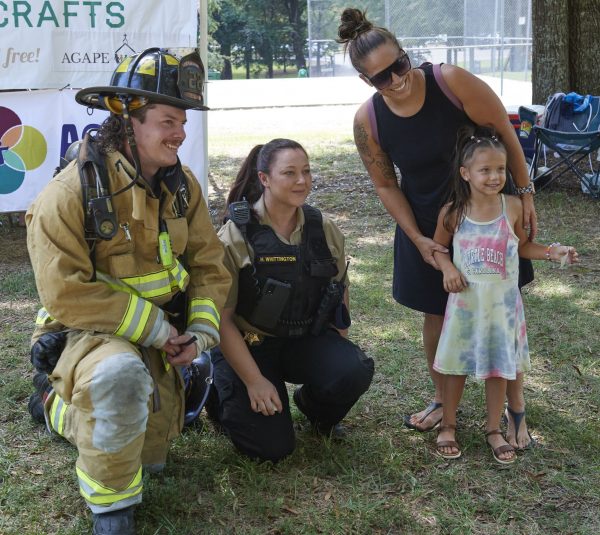 First responders pose for a photo with a child at Carolina Bible Camp’s bluegrass festival Sept. 11.

“It’s too important a day to let go without recognition,” said Lisa, whose husband, Greg, a Wilkesboro deacon, serves on the Carolina Bible Camp board.

When the hijacked planes crashed into the World Trade Center, Vickers, the Winston-Salem news anchor, was working as a journalist across the Hudson River in New Jersey.

“I could see the flames,” said Vickers, a nondenominational Christian.

Her older brother, retired Army Spc. Ripton Vickers, served in Afghanistan and South Korea. She wrote a children’s book, “Why My Hero Had To Go,” inspired by her nephew Jared’s dismay over his father leaving to serve overseas. She read that book Saturday morning to children at the festival. 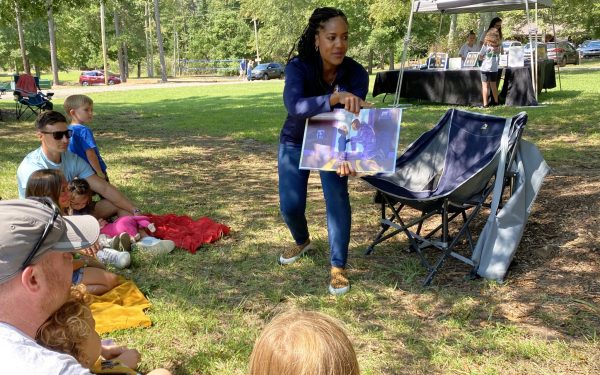 Talitha Vickers reads her book, “Why My Hero Had To Go,” to children at the Carolina Bible Camp Bluegrass Festival.

Gary Scruggs, a member of the Kannapolis Church of Christ and a bluegrass festival volunteer, worked as a contractor in Afghanistan for two years. His son, retired Army Capt. Ben Scruggs, served nine months in combat in Afghanistan as part of the war launched in response to the attacks.

The older Scruggs said he appreciated the recognition given to the military at Saturday’s festival.

Related: At 20th anniversary of 9/11, faith remains a big part of the story

“I know we can sometimes overdo it,” he said. “But I think we need to keep showing our respect for the military and keep that instilled in our young people. This is an all-volunteer group, and we may need volunteers again.” 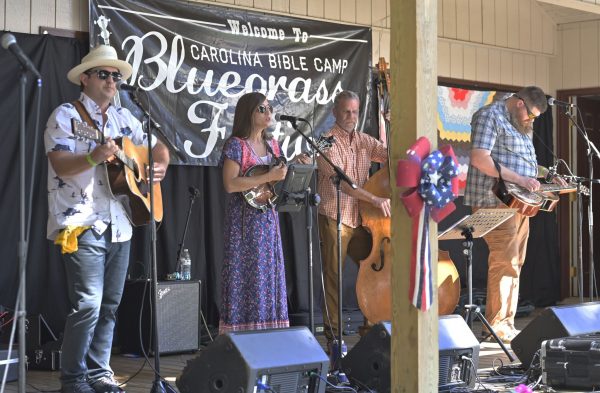 The bluegrass duo His & Hers, at left, performs at Carolina Bible Camp’s bluegrass festival Sept. 11. Caleb Davis (guitar)  and his wife, Sarah Davis (mandolin), are members of the Jericho Church of Christ in Mocksville, N.C., next door to the camp. 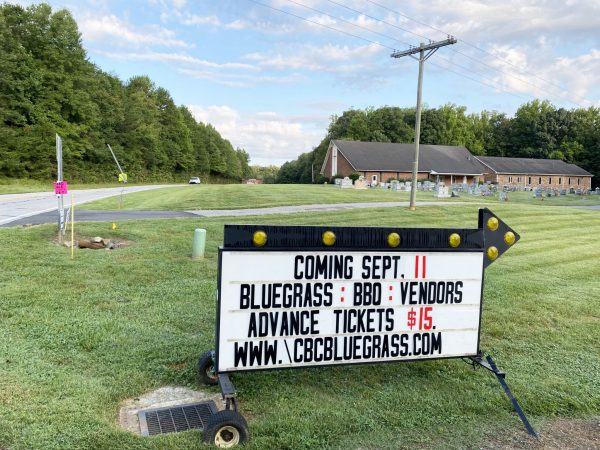 A sign at the entrance to Carolina Bible Camp and Retreat Center in Mocksville, N.C. The Jericho Church of Christ can be seen in the background. 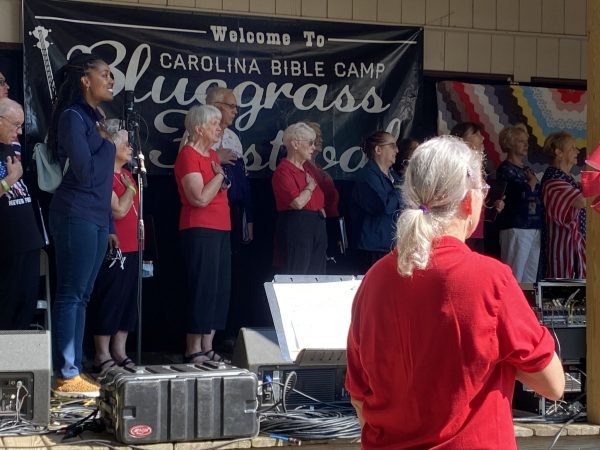 Talitha Vickers, left, lead the reciting of the Pledge of Allegiance.