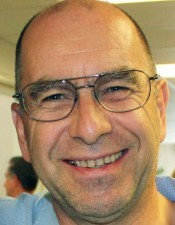 Christians encouraged by mission trip to ‘France in North America’

Erik Tryggestad
For 16 years, Bren White has prayed for souls on a tiny group of islands off the coast of Newfoundland.
St. Pierre and Miquelon, home to about 6,300 people, is a French territory. Though surrounded by English-speaking Canadian provinces, the islands have maintained their French culture and language since the 1600s.
“Very few people have ever visited these hard-to-get-to islands, and no one from the Churches of Christ has ever shared the good news there,” said White, director of Operation French World, a ministry that sends mission teams to French-speaking countries. “There is no New Testament church there. In fact, no non-Catholic churches have ever existed on these islands.”
White and Jean-Claude Schmidt, a French-born Christian who lives in Ohio, took a flight from Halifax, Nova Scotia, to the islands, known as “France in North America.” During their three-day stay, the men talked to more than 80 people about the Gospel and made 40 strong contacts for follow-up, White said.
“No Bibles were spotted anywhere on the islands,” White said. He and Schmidt gave away 15 French Bibles and plan to send additional copies to their contacts. The church members also hope to host public meetings during return visits to St. Pierre and Miquelon.
FOR MORE INFORMATION, e-mail [email protected].