Strip their membership in the National Collegiate Athletic Association. 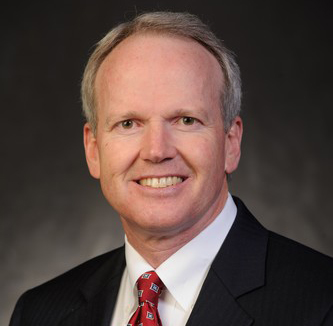 Bruce McLartyThat’s what major gay-rights groups would like to do with higher education schools that espouse traditional biblical beliefs on sexuality and gender identity.

“Some voices are calling for Christian schools to be expelled from the NCAA, and others are calling for Pell Grants to be denied to students who attend our universities,” said Bruce McLarty, president of 6,000-student Harding University in Searcy, Ark. “These attacks seem to be coming from every direction these days.”

At Harding, students received $54 million in federal loans and grants last year — 45 percent of the university’s total budget of $120 million.

It would be a major loss if the government ever took away students’ access to federal funding.

“My hands shake as I write those numbers!” the Harding president said in an email. “The good news is that the largest part of that figure is from loan money, and that can be replaced even if at a higher cost (interest rate) to students.”

In a landmark 5-4 ruling a year ago, the U.S. Supreme Court legalized same-sex marriage.
Emboldened by that decision, advocates for lesbian, gay, bisexual and transgender rights pressured the U.S. Department of Education to release the names of more than 200 religious institutions that have sought exemptions from Title IX nondiscrimination rules.

Campus Pride targets what it characterizes as “anti-LGBTQ religion-based bigotry.” The gay-rights group Campus Pride has created what it characterizes as a “shame list” of institutions that it claims sought Title IX exemptions since 2009 “based on anti-LGBTQ religion-based bigotry” — including Freed-Hardeman University  in Henderson, Tenn., and Oklahoma Christian University  in Oklahoma City.

At least six other universities associated with Churches of Christ also have requested Title IX exemptions dating back to the 1970s and 1980s: Crowley’s Ridge College in Paragould, Ark.; Harding; Lipscomb University in Nashville, Tenn.; Lubbock Christian University in Texas; Ohio Valley University in Vienna, W.Va.; and York College in Nebraska. However, Lubbock Christian’s request apparently was never granted, according to records released by the Department of Education.

While 200-student Southwestern Christian College in Terrell, Texas, has not sought a Title IX exemption, it is “very concerned in seeking solutions to be in compliance without violating Christian morals and values,” Vice President James Maxwell said.

“Without federal grants and student loans, we will not be able to financially continue as an accredited liberal arts Christian college,” Maxwell said of the only historically black college among Churches of Christ. “But we are aware that we have to live ‘in the world and not of the world.’”

James O. Maxwell is a longtime minister and administrator for Southwestern Christian College in Terrell, Texas. (PHOTO BY LYNN McMILLON)

“When Title IX was originally passed, it was to protect women from discrimination in education,” said Melody Wood, a research assistant with the Heritage Foundation’s DeVos Center for Religion and Civil Society. “Over the years, it’s become a tool for bureaucrats to force schools — and sometimes religious schools — to create special privileges.”

In a letter to educators nationwide, the Obama administration said the law encompasses people whose gender identity may be different from their sex assigned at birth. For schools seeking to maintain federal aid while adhering to biblical practices, the letter prompted concern.

Deby Samuels“This is still unclear territory and continues to evolve,” said Deby Samuels, senior vice president for communication and marketing at 4,700-student Lipscomb. “We have been concerned for several years as we have seen more and more federal regulations being imposed by administrative fiat rather than representative democracy.”

The day may come, Samuels added, “when students who have government-granted loans will not be allowed to bring those dollars to a university that upholds Christian principles.”

For now, however, Title IX does not apply to an educational institution controlled by a religious organization “to the extent that application of Title IX would be inconsistent with the religious tenets of the organization,” according to the Education Department’s Office for Civil Rights. SEXUAL IMMORALITY PROHIBITED

Harding employees and students can’t marry or date a person of the same sex. Neither may they engage in behavior suggesting a romantic same-sex relationship.

“The university further holds to the biblical principle that sexual relationships are unacceptable to God outside the context of marriage,” McLarty said. “Sexual immorality will result in dismissal from the university.”

The Lipscomb community treasures and celebrates “its foundational 125-year-old commitment to be followers of Jesus first,” Samuels said. Therefore, students, faculty and staff must “practice a lifestyle that reflects that commitment, including in the area of sexual conduct.”

“Sexual immorality of any kind is prohibited,” Samuels said. “In cases where this policy is not observed, we have appropriate procedures, rooted in Christian principles of repentance and reconciliation, that reflect an intentional, courageous and gracious Christianity.”

Students walk on the Lipscomb University campus in Nashville, Tenn. See our story on Lipscomb’s efforts to raise sexual assault awareness in keeping with Title IX regulations. (PHOTO VIA LIPSCOMB.EDU)

Lipscomb has students who identify as lesbian, gay, bisexual, transgender and questioning, and the university seeks to create an environment that recognizes all people’s potential for godliness, Samuels added.

“When there are differences among us, even deep ones, we will treat people with respect and love and provide a safe environment where ‘different’ people can find their wholeness,” she said. “But we will always seek to be faithful to God’s will above our own or that of others.”

Lubbock Christian declined to respond to specific questions concerning whether it had sought or received Title IX exemptions.

However, LCU said in a statement that its campus community must “act in a way that is consistent with God’s design for his creation as found in Scripture.”

“We seek to comply with all legal requirements, including Title IX and other federal and state regulations, while remaining faithful to our Christian mission,” LCU said. “We place our hope in the one true God and move into the future with confidence in his goodness and sovereignty. We live in a difficult and challenging regulatory environment, and we constantly pray for wisdom as we navigate the way forward.” 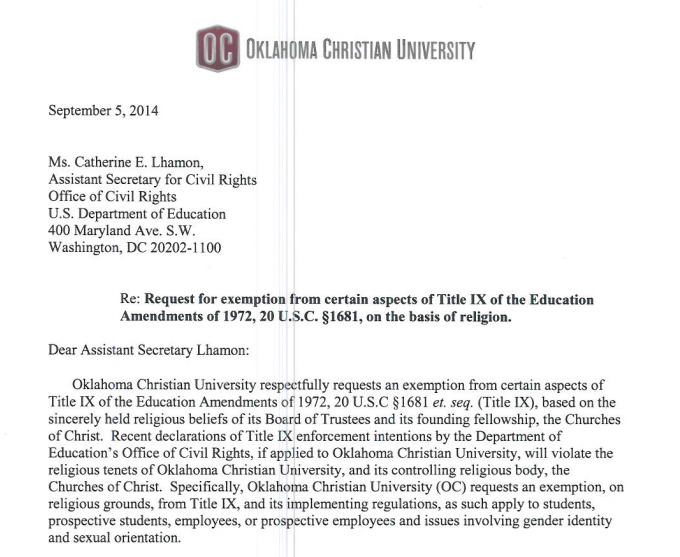 Risa Forrester, vice president of admissions and marketing at 2,600-student Oklahoma Christian, said: “We know these issues are sensitive and personal. And we believe God calls us to make OC a place where all students are valued and treated with compassion, kindness, respect and love. Because of our deeply held beliefs, we sought a Title IX exemption to proactively protect our religious freedom, but this exemption only applies to Title IX provisions that are inconsistent with our religious tenets.

“We have, and will continue to have, comprehensive Title IX staffing, policies and procedures in place to protect all students — without exception — against discrimination and harassment.”

Officials with Ohio Valley and York declined to comment, while Crowley’s Ridge and Freed-Hardeman did not respond by press time.

Pepperdine University in Malibu, Calif., had a Title IX exemption for decades until withdrawing its request for that status this year.

“It did not reflect Pepperdine’s current views around the role of women in university life and leadership. … It does not fully reflect Pepperdine’s values today,” Rick Gibson, vice president for public affairs and church relations, said of the exemption. “We believe that Pepperdine’s mission and the goals of Title IX are aligned, and we are committed to complying with Title IX in its entirety.” 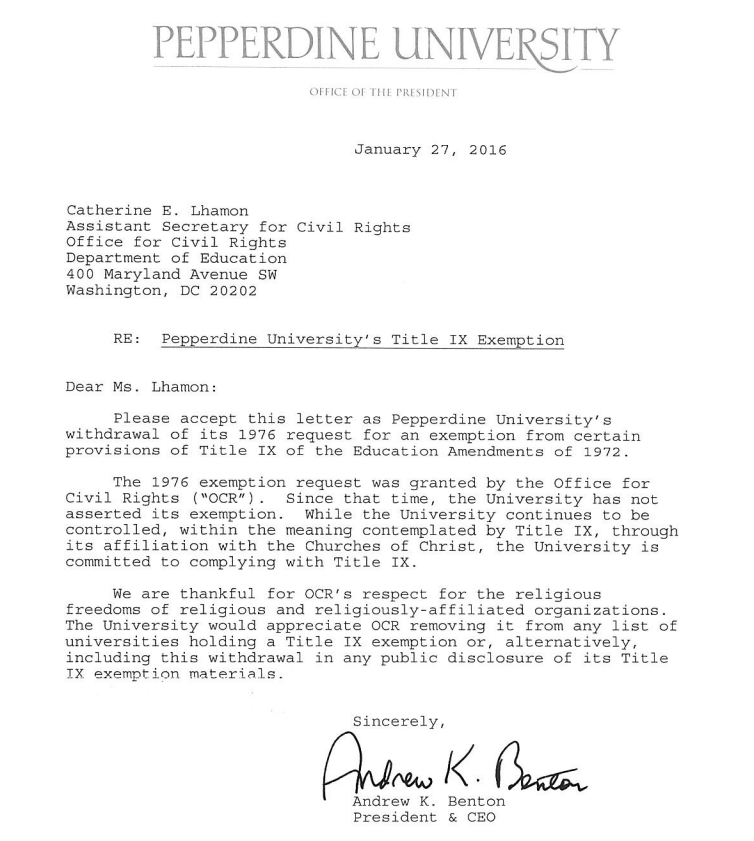 Abilene Christian University in Texas has not sought an exemption but has wrestled with the LGBT issue, said Jason Groves, chief marketing officer. ACU’s board recently affirmed “the dignity and worth of all human beings” while reiterating its belief that God reserves sex for a married man and woman.

Rochester College in Michigan, which also has no Title IX exemption, said it has openly gay students.

That institution, formerly known as Michigan Christian College, believes it exists “to provide a positive influence into the lives of all our students, whether they come to us closely aligned with our values or not.”
OPPOSITION AND OPPORTUNITIES

Eighty gay-rights organizations have petitioned the NCAA to divest itself from religious schools that request Title IX waivers.

In a statement, NCAA spokeswoman Gail Dent noted that the Education Department, not the NCAA, considers and oversees the exemption process.

“The NCAA is a very diverse association of over 1,100 schools that have diverse missions with diverse philosophies and focuses,” Dent said.

The Human Rights Campaign pushed for disclosure of the schools that received exemptions, citing a need for transparency and accountability by educational institutions.

However, potential students are going to look on a university’s website, not in a government database, said Douglas Laycock, a University of Virginia law professor who studies religious liberty issues. 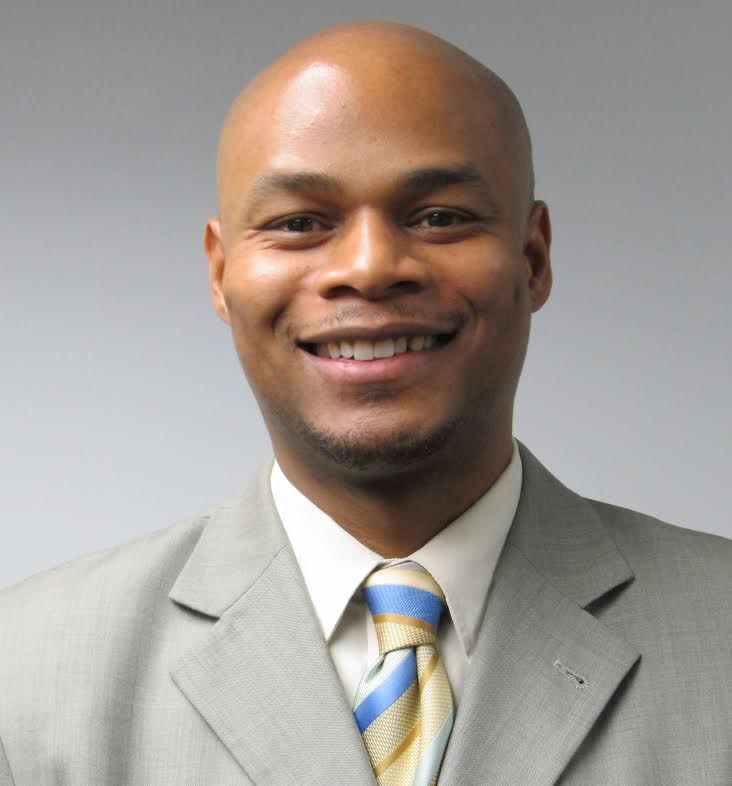 Melvin Otey“So the point of wanting that list in D.C. is not to help students,” Laycock said. “It’s to enable activists to harass those schools, I suspect.”

“Christians must anticipate that schools declining to affirm that they will not discriminate based on sexual orientation in educational programs and activities will lose the benefit of some federal funding,” said Otey, a former U.S. Justice Department attorney who is now an associate professor of law at Faulkner University in Montgomery, Ala.

At Harding, McLarty said he’s concerned about what might happen ­— but not afraid.

“Christians have always faced opposition,” he said. “We are committed to doing what we believe the Bible teaches us to do.”

McLarty cited 1 Corinthians 16:9, penned by the apostle Paul during his third missionary journey: “A wide door for effective work has opened to me, and there are many adversaries.” 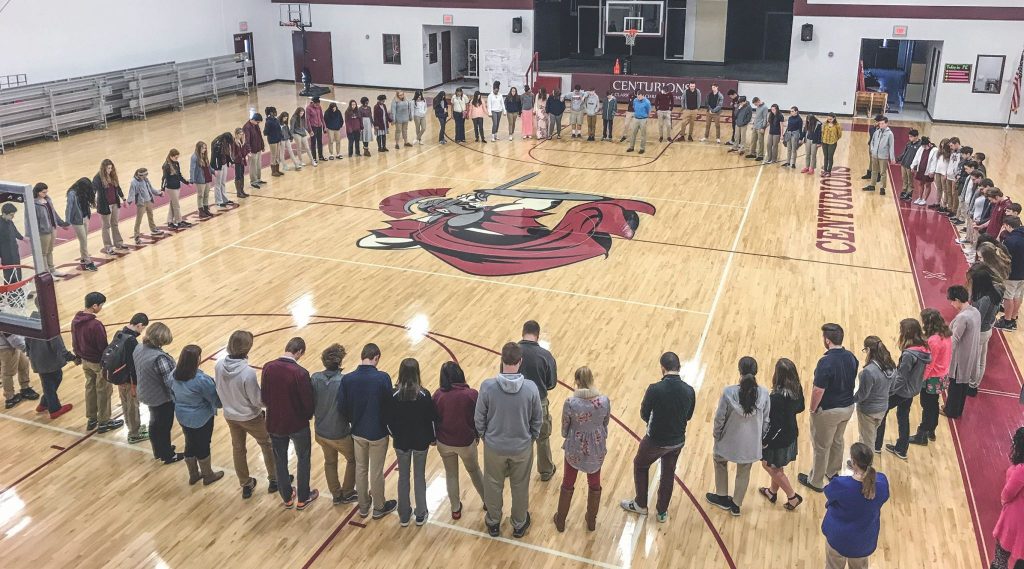 FEATURE PHOTO (above): "A month after 17 students died at…