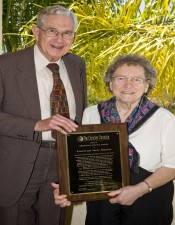 Christian Service Award given to Everett and Nancy Ferguson

Joy McMillon
MALIBU, Calif. — Everett and Nancy Ferguson from Abilene, Texas, were awarded the Christian Service Award by The Christian Chronicle during the recent Pepperdine Bible Lectures.
Citing the Fergusons’ 45 years of leadership in service and scholarship, trustee Emily Lemley presented the award at a Chronicle luncheon.
Everett Ferguson is a distinguished scholar in residence at Abilene Christian University, where he has taught since 1962. Born in Montgomery, Texas, he graduated with a bachelor’s degree in Bible from Abilene Christian in 1953.
In 1960 Harvard University granted him a Ph.D. “with distinction,” and he was chosen to deliver the Greek Oration at the 1956 Harvard Divinity School commencement.
Following graduation, he and Nancy moved to Philadelphia, where he taught for two years at the Northeastern Institute for Christian Education, which became Northeastern Christian Junior College and later merged with Ohio Valley University in Vienna, W.Va.
Ferguson’s awards include a Festschrift, a book honoring an academic and presented during his lifetime.
“The Early Church in Its Context: Essays in Honor of Everett Ferguson” was published in 1998.
His recent books include “”Baptism in the Early Church: History, Theology, and Liturgy in the First Five Centuries,” published in 2009, and “Church History, Volume One: From Christ to Pre-Reformation,” published in 2005.
Born in Paducah, Texas, Nancy Ferguson graduated from Abilene Christian in 1955. She has taught children’s and women’s Bible classes, conducted workshops and written two books: “Living a Worthy Life” and “For the Love of the Lord.”