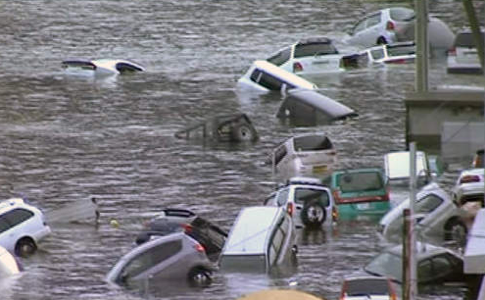 Disaster relief organizations associated with Churches of Christ are preparing to respond to the powerful earthquake and tsunami in Japan that killed an estimated 10,000 people.
Healing Hands International is accepting donations for Japan relief. The humanitarian relief organization reports on its website:

Healing Hands International is currently in the assessment phase and has been in contact with missionaries who have been in that area. They recently returned to the U.S. so they were not there when the earthquake hit. They are, however, trying to contact friends in that area. At this time most communications are down but as soon as we have a report we will pass that along to you.

WFR Relief Ministries of the White’s Ferry Road Church of Christ in West Monroe, La., also is exploring how Christians can serve the people of Japan. Former Director Don Yelton, now the ministry’s American ambassador, said in an email:

As you know, it is HOPE that people need during these tough times, but offering funds when a family looses a home, etc. sure helps. How to use those dollars that our brethren might give is another matter. That’s why my opinion and practice has always been to just lift up the hands of local Churches of Christ. They will find the most appropriate way to help.

Image from a Japanese television station of the devastation from the earthquake and tsunami.

Our students, both Japanese and Americans that have studied in Japan, are very concerned about the destruction there.

Oklahoma Christian is providing regular updates on its website:

All of OC’s students from Japan have now made contact with their families. They are all safe.

Abilene Christian University senior Maya Ohori spent hours overnight Thursday and Friday morning trying to contact her family in Fukushima, Japan.
“They’re OK,” Ohori said of her relatives Friday afternoon. “Last night, I was sleeping and my boyfriend called and asked me how my family was. I didn’t know what he was talking about. He told me to turn on the news.”
She said her family’s home was damaged, but still livable.
Ohori said her hometown was struck hard, but perhaps did not sustain as much damage as other areas.

Staci Driskill Maloney is an Oklahoma Christian graduate serving as an English teacher in Mito, Japan. She told her mother, Karen, in an email Friday:

We have had about 30 earthquakes throughout the night. They aren’t bad. We have heard helicopters, ambulances and public announcements all night. All the tile from the roof is in the parking lot. There are many cracks on our walls, and the kitchen is a disaster. Also, the floor buckled slightly. We are very lucky. Schools look worse.

Thank you all for your messages of encouragement. We are now staying at a friends apartment. We have water and electricity at this apartment, but not at ours. (Still no gas.) Mito looks pretty good, it could be a lot worse. Please be praying for our friends in Sendai, they are going to have a difficult time putting themselves back together. Again, thank you. I love each and everyone of you. Romans 8:31

Kent Hartman, a missionary in residence at Oklahoma Christian, was an hour from landing in Tokyo when the earthquake struck. Hartman was flying to Japan to visit Paul and Stacey Herrington, a Helpers in Missions couple serving in Haruna, about 100 miles north of Tokyo.
Bob Carpenter, a professor of missions at Oklahoma Christian, reports:

I don’t have the whole story, but I talked with (Kent’s wife) Nancy Hartman last night, and she said that Kent spent a total of 31 harrowing hours on the plane, counting from the time he departed the U.S., without being able to get off. The plane was relocated once or twice after first landing at an air base in Japan. Paul Herrington and Obata-san, the preacher he works with, spent some 20 hours in their car trying to locate Kent’s whereabouts and also navigating their way there, sleeping in the car overnight.
As of the time I spoke to Nancy last night, Paul and Obata-san had finally met up with Kent at Narita Airport, which had reopened in the meantime. They were making their way to Haruna.

Elsewhere, Tim Shiroma, a leader of the Maui Church of Christ in Hawaii, shared this news with Christian Chronicle Editor Lynn A McMillon in an email:

Although Kahului harbor had the highest surge of all the Hawaiian Islands (6 feet or so) there was no damage at all to the Church property! That is remarkable since the surge came in up to 1/3 of a mile inland in parts of Kahului. Thank God! Thank God! Thank God!

The Montgomery Advertiser in Alabama reports:

Faulkner University’s softball team was getting some much-needed rest Friday morning at its hotel near Waikiki, Hawaii, where they are staying ahead of several scheduled games next week.
Shortly after a massive earthquake struck off the coast of Japan and spawned a tsunami, warning sirens blared in Hawaii.
The first alarm was sounded about 11:30 p.m. in the hotel, said Ryan Bartels, Faulkner’s sports information director.

NewsChannel 4 in Oklahoma City interviews Hiroka Kajiyama, an MBA student and Japanese language instructor at Oklahoma Christian.
The Christian Chronicle is interested in other church connections, relief efforts and needs related to this disaster. If you can provide such details, please leave a comment. Also, please feel free to share prayers and notes of concern.