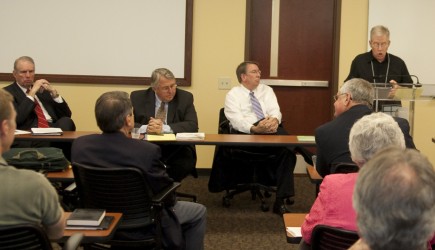 Bobby Ross Jr.
NASHVILLE, Tenn. — In an era of rising secularism and declining church membership, can Christian higher education survive and thrive?
Leaders of colleges and universities associated with Churches of Christ tackled that question during a 90-minute panel discussion at the recent Christian Scholars Conference at Lipscomb University.
Christian higher education “is being roiled by economic, philosophical, ideological and political forces beyond anything I have seen in my lifetime,” Darryl Tippens, provost of Pepperdine University in Malibu, Calif., said in a paper presented during the discussion.
“Our institutions are in transition, even in crisis,” Tippens said. “We are in an in-between time.”
In a separate paper, Mike O’Neal, president of Oklahoma Christian University in Oklahoma City, cited “deep concern for the profound influence of an increasingly secular culture on faith-based institutions.
“I believe that modernism and post-modernism are two of Satan’s primary weapons against Christianity,” said O’Neal, who took a sabbatical leave in 2008 to research practices at 25 faith-based universities not associated with Churches of Christ.
In a third paper, Tracey Hebert, academic dean of Rochester College in Michigan, tackled the future of leadership in Christian higher education.
Hebert surveyed senior administrators at institutions associated with Churches of Christ.
Administrators who completed the survey acknowledged “the changing demographics and shrinking student market within the Churches of Christ,” Hebert reported.
“Some respondents expressed understanding that this will necessarily bring about an expansion of mission to broader constituencies, while emphasizing that this needs to be done without compromising core values and beliefs,” Hebert’s paper said.
In the 2009 edition of Churches of Christ in the United States, 21st Century Christian identified 12,629 a cappella Churches of Christ with 1,578,281 adherents nationwide.
Those figures — the most recent available — represent 526 fewer churches and 78,436 fewer people in the pews than just six years earlier.
An increasing number of colleges and universities associated with Churches of Christ draw more freshmen from outside the fellowship than within, The Christian Chronicle has reported.
Ten years ago, Church of Christ members comprised 70 percent of freshmen at 18 Christian higher education institutions, according to a survey by Flavil Yeakley, director of the Harding Center for Church Growth in Searcy, Ark.
By fall 2009, that figure dropped to 53 percent.
When Christian colleges were founded, an organizing principle was that the institutions would help strengthen the church in specific geographic regions, Lipscomb President Randy Lowry noted during the panel discussion.
In return for the Christian college producing church leaders, Lowry said, there was “almost an unwritten contract” that the church would supply future students.
“Over time, the institutions have grown strong and somewhat competitive with each other,” Lowry said.
“The church has changed a little bit in its relationship with the institutions, calling for the institutions to have a political, religious, doctrinal position that’s just perfectly in line with theirs, or they won’t support it.”THREAT OR OPPORTUNITY?
While drawing more students from outside Churches of Christ might be frightening, Lowry said, it also could be viewed as an exciting development.
“God is sending to us the people that God wants us to educate, and even though they might not be the profile we had in mind, they might be the profile God has in mind,” he said.
For example, he mentioned a student from the Northeast who chose Lipscomb because she wanted to attend a “Christian” university, not because of its Church of Christ ties.
“You see, in her generation, whether we’re Church of Christ or Baptist or Methodist … didn’t make a hill of beans,” Lowry said
“Is that a threat or an opportunity?” he asked.
Dwayne VanRheenen, emeritus provost of Abilene Christian University in Texas, tried to put the challenges in perspective.
“When I look back, I see in our institutions something that I think most of us never dreamed of, never envisioned, that we as members of Churches of Christ would have founded universities that are highly respected in American higher education,” VanRheenen said.

’SOURCES OF LIGHT AND LEAVEN’
Andy Benton, president of Pepperdine University, said he remains convinced that Christian universities have a unique role to play.
“I believe that our Christian colleges and universities are good for the local church,” Benton said.
In the view of David Burks, president of Harding University, an institution that weaves a Christian worldview through everything it does — from academics to sports — will flourish in the 21st century and beyond.
“I’m basically very optimistic, if in fact we keep the main thing the main thing,” Burks said, referring to the emphasis on biblical teaching and spiritual development.
O’Neal and Billy Hilyer, president of Faulkner University in Montgomery, Ala., were absent from the panel. The death of a friend kept Hilyer from attending, while a flight cancellation stranded O’Neal.
In his presentation, Tippens said most secular institutions resist “the basic human need for spiritual wisdom.”
That gap provides an opening for Christian higher education at a critical time, he said.
“In my judgment,” Tippens said, “we have a rare opportunity to be sources of light and leaven in the big lump of higher education — if we are courageous, willing to engage the big questions of the day, willing to do the hard thinking necessary to articulate a philosophical grounding of our enterprise and willing to relinquish our self-imposed isolation.”
In his paper, O’Neal noted that Oklahoma Christian has adopted “Faith(fully)” as one of its mottos.
That slogan, he said, is “meant to signify that OC is seeking to fully embrace all that faith demands — whatever is true, noble, right, pure, lovely, admirable, excellent and praiseworthy.”
“Such ideals and concepts are not generally encouraged by today’s Western culture,” O’Neal said, “thus demanding that faith-based institutions must be countercultural.”