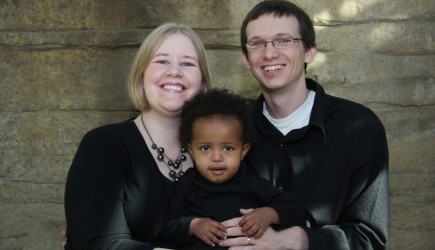 Amanda Jordan
Alisha Rusher described the recent adoption of her daughter, Tsehay, as one of the “most exhilarating and most difficult experiences” of her life.
Rusher and her husband, Brian, are part of a mission team in Vienna, Austria, supported by Churches of Christ in the U.S. They plan to return to the States this year with their new daughter.
“Brian and I knew that we wanted to grow our family though adoption long before we were ready to start a family,” Alisha Rusher said. “When we began thinking about starting a family, we researched our options and decided that international adoption was the best fit.”
Adoption requirements vary by country. After some research, the couple decided that Ethiopia was the best option.
They aren’t alone. An increasing number of Christian families look to the horn of Africa to adopt.
Ethiopia suffered a devastating drought and famine in the 1980s. Though the situation has since improved, many families still live in poverty and must give their children to orphanages to keep them alive, said Rob Webb, a member of the Brentwood Hills Church of Christ in Nashville, Tenn.
In the summer of 2008, Webb and his wife, Emily, began the process of adopting two girls from Ethiopia. International adoptions are expensive, so the couple hosted raffles to raise funds. The first was a success, but the second netted nothing.
Webb began thinking about ways to help others families raise the money for the legal fees and paperwork associated with adoption.
During his own adoption experience, he read books about Ethiopia and learned that it is thought to be the birthplace of coffee. That resonated with Webb, whose family has been in the coffee business since he was 2. His father launched Webb’s Coffee Service, which supplies refreshments to businesses in middle Tennessee.
Webb created Just Love Coffee Roasters (www.justlovecoffee.com). Interested couples sell the company’s fair-trade coffee and put some of the profits toward adoption expenses.
“Fundraising is a lot of work for little return to the number of hours of labor involved,” he said. “So I developed a system that required the least amount of work for the adoptive family or organization that produced effective results.”
Some of the profits go toward a school-building project at the orphanage where the Webbs adopted their daughters in Ethiopia’s capital, Addis Ababa.
Though she was thrilled to be united with her daughter, Alisha Rusher found it difficult to see the poverty and hardship surrounding her during her visits to Addis Ababa.
She also was moved by the way Tsehay’s former caretakers at Toukoul Orphanage responded to her departure.
“Three of her four caretakers at the orphanage joined us to hold Tsehay and tell her goodbye,” she said. “The fourth caretaker was too emotional to tell her goodbye.”
A STORY OF ADOPTION
Leaving Ethiopia also was hard for Allen Thompson, who moved to Wisconsin with his adopted family at age 14. He considers his adoption to be the best thing that happened to him — aside from becoming a Christian. But he sometimes struggles with the fact that so many of the children in his orphanage didn’t get adopted.
“Instead of complaining, ‘Why me?’ and ‘Why not me?,’ I let God use me,” he said.
Thompson met his wife, Laura, at Oklahoma Christian University in Oklahoma City. The couple moved recently to Mito, Japan to teach English. They assist a church-sponsored ministry for the homeless.
Though vastly different from Africa or the U.S., their mission field seems appropriate, said Thompson, who grew up in the city of Mito, Ethiopia.
He and his wife want to do for another Ethiopian child what his American family did for him. They plan to adopt from Ethiopia — whether they are able to have biological children or not. Currently, the Thompsons support an 7-year-old girl in Ethiopia.
“I thank everyone who God used for me to be where I am today — and everyone who supports the Ethiopian work,” Thompson said, “I am a result of their outreach.”
LEARNING A NEW CULTURE
Thompson and Webb stressed that families adopting internationally should incorporate the practices and culture of the adopted child’s native country into their everyday routine.
Studying the culture the child is from helps prepare for the adoption journey, Webb said. Thompson suggested keeping part of the child’s original name intact so they can hold onto a piece of their native culture.
“If you have a roof over your head and a heart for children, then I would urge (you) to begin praying about it,” Webb added. “There is such an enormous need, and there are so many families who have room for these children.”