ZAGREB, Croatia — For nine years, members of Churches of Christ in this central European capital have organized an annual outreach to children known as “Champs Camp.”

It’s not every year, though, that the weeklong, Christian-themed day camp mixes Vacation Bible School songs and lessons about Jesus with a venue normally reserved for dancing and drinking.

Related: On Croatia trip, a son reminds his father of the value of missions

“This may be — I don’t know — the first VBS ever held in a nightclub,” quipped American missionary Steve Taliaferro, who arranged the alternate location amid rain and the threat of lightning at the normal outdoor site. 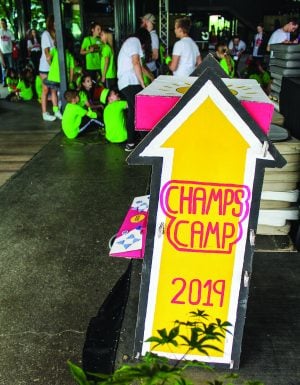 Children interact with the teen volunteers during Champs Camp at the nightclub.

The 85 Croatian children who showed up didn’t seem to mind — or even notice — the whiskey bottles stacked high along the Aquarius Klub’s walls.

They were too focused on the Croatian and American teens — including a mission team from the Crestview Church of Christ in Waco, Texas — who led them through six stations: one for crafts, one for games, one for sports, one for skits and songs, one for snacks and one for Bible study.

“We walked in, and I saw two bars immediately,” said Grant Davis, 16, part of the Crestview youth group. “I was like, ‘What is this place?’ I found out later it’s a nightclub.”

He decided they might as well redeem the space.

Champs Camp — named after a similar event hosted by the Round Rock Church of Christ in Texas — introduces children to Jesus in this Catholic nation that once was a part of communist Yugoslavia.

A quarter-century ago, Croatia gained its independence after a four-year war between Croat and Serb forces that claimed an estimated 20,000 lives.

Related: Why one minister is passionate about what God is doing in Croatia

The crescent-shaped Balkan nation — about the size of West Virginia — has a population of 4.1 million, but that number keeps falling. Hundreds of thousands of Croatians have left to seek better opportunities in richer European Union countries. 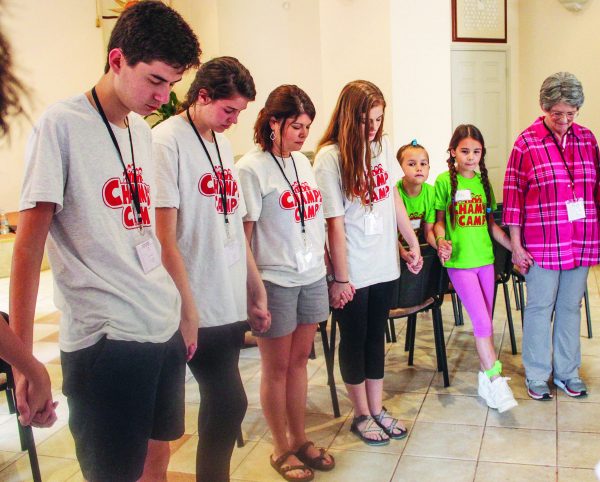 As a democracy, Croatia allows religious freedom. But for many, national identity is tied closely to religious heritage — even if one doesn’t actually practice that faith.

“So if you’re a Croat, you’re a Catholic. Period,” said Jura Lazar, managing director of Croatia for Christ, a television and print evangelism ministry. “If you’re Serbian, then you’re Orthodox.”

Lazar, who was raised Catholic, played bass clarinet for 23 years in the Croatian Armed Forces Band.

His search for deeper spiritual meaning began in the early 2000s after an infection killed one of his twin sons, who was five days old.

During Lazar’s journey of discovery, he crossed paths with short-term missionaries from Let’s Start Talking, which helps non-native speakers improve their English using the Bible.

At the time, Lazar considered the meeting an accident. 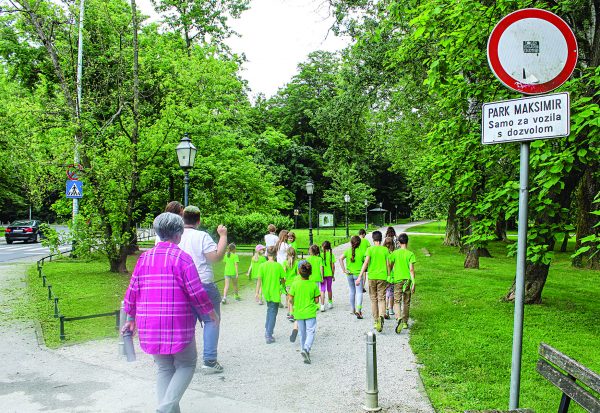 Children and volunteers visit a park during Champs Camp in Zagreb, Croatia. The weeklong camp has expanded to two locations since its launch nearly a decade ago.

“I read the New Testament for the first time in my life,” said Lazar, who alarmed close relatives when he decided — after more than three years of Bible study — to be baptized at a Church of Christ.

“They think of us like we think of the Hare Krishnas that we pass at the airport.”

By some estimates, all evangelical forms of Christianity comprise less than one-half of 1 percent of Croatia’s total population.

The nation’s Catholic majority — at 86 percent — often views Baptists, Nazarenes, Pentecostals and, yes, members of Churches of Christ with suspicion.

“They can be hostile to the evangelical faith. They think of us as a cult,” said Perry Stepp, director of the Zagreb Bible Institute, housed at the Kuslanova Church of Christ. “They think of us like we think of the Hare Krishnas that we pass at the airport.”

Yet Croatia’s half-dozen or so Churches of Christ — typically small congregations with 50 or fewer members — report progress.

With the support of Catholic bishops, Croatia for Christ and Eastern European Mission — both associated with Churches of Christ — have distributed more than 100,000 children’s Bibles in public schools in Croatia and neighboring Bosnia.

“I didn’t believe that he would say yes,” Lazar said of the first bishop he approached nearly three years ago.

“But I went there anyway, talked to him and showed him the copy of the children’s Bible. I told him, ‘With your blessing … we can make a big donation.’”

After that bishop agreed, other clerics joined him in welcoming free Bibles in their dioceses, Lazar said.

“It’s not only that we put children’s Bibles into children’s hands in the public schools,” the Croatia for Christ leader said. “Now, the Catholic church, which is very influential here, they start to look at us with different eyes. Again, I don’t believe in coincidences.” 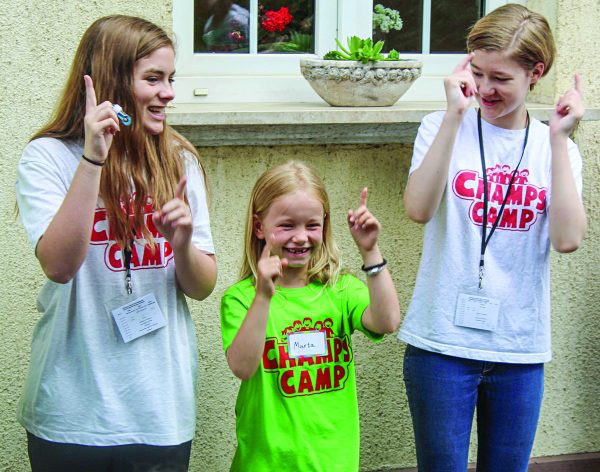 Kathryn Christian, left, and Lana Ilic, right, help lead a skit during Champs Camp in Zagreb, Croatia. Christian is a member of the Crestview Church of Christ in Waco, Texas. Ilic is the daughter of Kuslanova Church of Christ minister Mislav Ilic and his wife, Snjezana,

“The soil is pretty hard, but things are changing. People are changing,” said Snjezana Ilic, a convert whose husband, Mislav, preaches for the Kuslanova church.

“There’s more knowledge about our churches. People are not so suspicious, and we have a good reputation with this camp.”

“There’s more knowledge about our churches. People are not so suspicious, and we have a good reputation with this camp,” added the mother of two, whose entire family helped with Champs Camp. “The parents bring their kids and leave them. They trust us.”

The first year, organizers printed and distributed 6,000 brochures inviting children to attend, said Taliaferro, who is supported by the Pond Springs Church of Christ in Austin, Texas.

“We were out in city parks and neighborhoods and all kinds of places for about two months … talking to parents and inviting (their children) and that kind of thing,” he said. “And we wound up with 70 kids, which we considered an overwhelmingly huge success.” 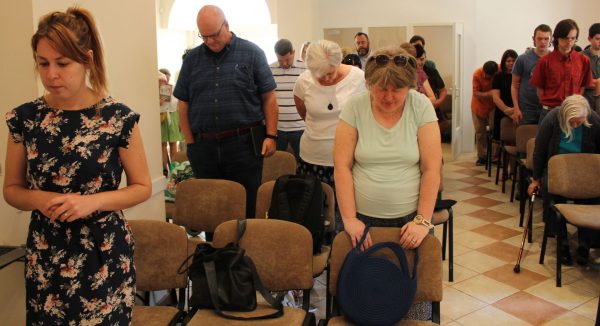 Worshipers pray during a Sunday assembly of the Kuslanova Church of Christ in Zagreb, Croatia.

The 50-year history of Churches of Christ in Croatia stretches back to 1969.

At first, the skeptical professor studied the Bible with Gatewood and Pickle “to prove them wrong,” said Kristijan “Tino” Jovanovic, Mladen’s son, who attends the Kuslanova church.

But eventually, the Americans converted Mladen Jovanovic, who became a pioneering minister and radio evangelist. After serving Jesus for more than four decades, he suffered a heart attack and died in 2011. He was 68.

“We can get more bang for our buck in terms of adding people to the kingdom of God if we go to South America, Africa and Asia.”

The Crestview church helped send the first missionaries to Croatia and has maintained its financial support for a half-century.

“We can get more bang for our buck in terms of adding people to the kingdom of God if we go to South America, Africa and Asia because that’s where the church is growing the fastest,” said Scott Talley, a Crestview elder who joined six other adults and 11 teens on the trip to help with Champs Camp.

“But Jesus said go everywhere and not just where it’s a little easier,” Talley added. “So we just feel really committed to it.” 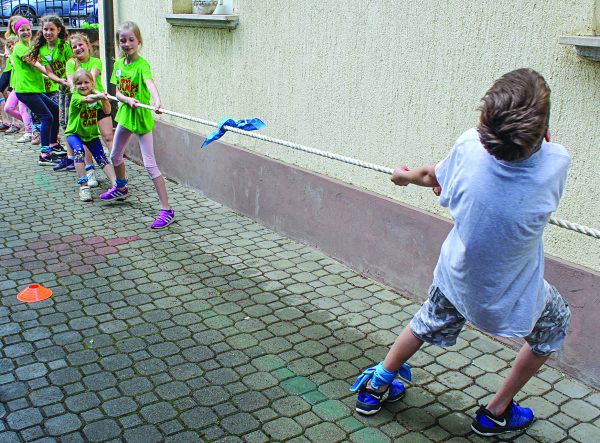 Girl campers pull hard on the rope as they play tug-of-war with boys during Champs Camp at the Kuslanova Church of Christ in Zagreb, Croatia.

Champs Camp started at Zagreb’s Lake Jarun, a major recreational area in this city of 800,000. Most of the campers live in multistory apartment buildings in the city’s heavily populated southwest quadrant.

Roughly 60 percent of the children are repeat campers from the previous year, which Taliaferro takes as a positive sign.

With the success of the original camp, leaders added a second location — the Kuslanova church building — that serves about 30 children in a more central part of Zagreb.

Some of the children who start as campers but grow too old to attend become “junior volunteers.”

They work alongside Croatian and American church members to make Champs Camp happen.

“I guess part of what keeps me going is seeing all the teenagers that have come out of this ministry and want to stay involved with this,” Taliaferro said.  “They’re hearing from us and seeing in our lives what it means to follow Jesus and what it looks like to follow Jesus. … There’s something about this that’s attractive to them.” 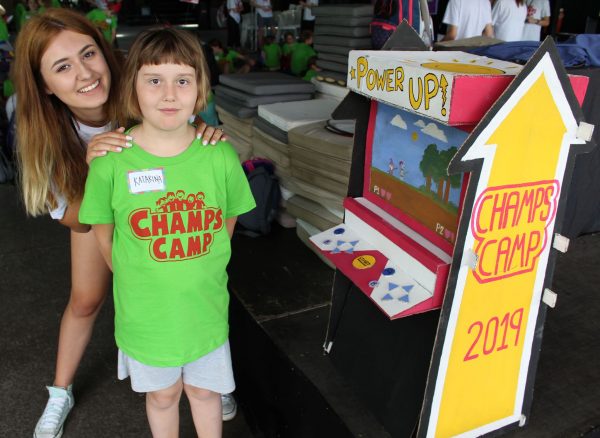 Patricija Tepsic, 17, posing with a camper, hasn’t missed a single year of Champs Camp in Zagreb, Croatia. She’s now one of the Croatian teen counselors.

Patricija Tepsic, 17, giggles as a group of campers form a circle and wrap her in a group hug.

“I like that it’s connected with Jesus and church. It’s just all very positive and beautiful, and I want that in my life.”

Now a volunteer, Tepsic said she loves meeting the American church members who come each summer. This year, she and other Croatian teens enjoyed a weekend planning retreat with the Crestview group and later joined the Texans on a trip to the island of Krk in the Adriatic Sea.

“I like that it’s connected with Jesus and church,” she said. “It’s just all very positive and beautiful, and I want that in my life.”

Asked if she knew Jesus before she came to Champs Camp, she replied, “Yeah, but I’m not really a true believer. But I like that they teach children about it.”

What would it take for her to become a true believer? 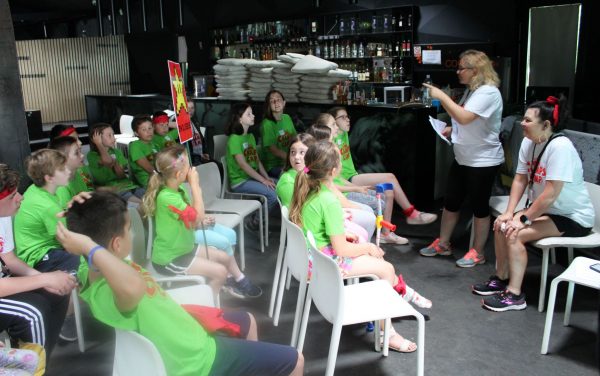 Croatian children study the Bible during Champs Camp, which was moved because of rain to a nightclub.

Many of the Croatian teen volunteers don’t have any other association with church besides Champs Camp. 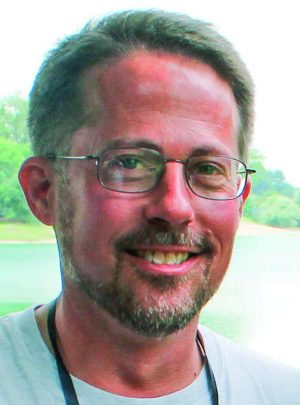 Taliaferro hopes to change that.

In the fall, he intends to step away from his work with the Zagreb Bible Institute — Champs Camp’s official sponsor — and develop a full-time ministry to young people.

His goal: to deepen the relationships already formed.

Even the nightclub manager voiced support for that long-term vision.

“When I was making the deal with the manager here for this space, I described to him the plans for that starting in the fall,” said Taliaferro, who suspects the bar boss is a non-practicing Catholic. “He said, ‘Oh, we need something like that. Our kids are just directionless these days.’” 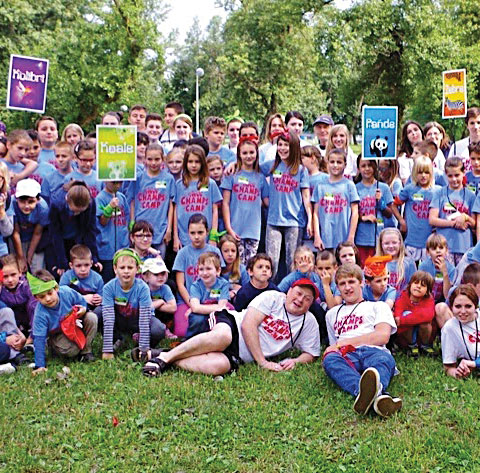 ‘The seeds he planted are not dying’

“Very truly I tell you, unless a kernel of wheat…