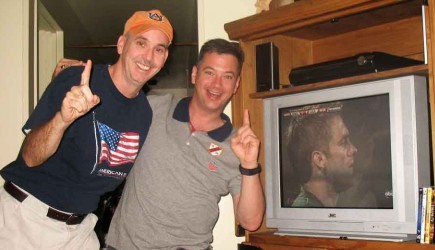 Erik Tryggestad
Christians in Port Elizabeth, South Africa, stood in line for more than 10 hours to get tickets to the 2010 World Cup.
“It is an exciting time to live here and to see the patriotism growing among the locals,” Judy Kendall-Ball said, adding a “Go Bafana Bafana” for good measure. That’s the nickname of South Africa’s team.
For the first time in its history, the FIFA World Cup took place on African soil, where Kendall-Ball and her husband, Ken, serve schoolchildren. The couple works with the poorest schools on South Africa’s Eastern Cape province, providing a Bible-based, character-building curriculum.
From Columbia, Mo., to Salvador, Brazil, church members hosted watch parties for “the beautiful game,” as soccer is widely known. Three members of the Chibana Church of Christ on the island of Okinawa, Japan, rose at 2:30 a.m. to watch the U.S. play England, member Stephen Wolf said.
Though Tanzania is thousands of miles closer to South Africa than Okinawa, missionaries there said they wouldn’t be able to see many games on TV. Satellite and cable are hard to come by, said Brett Harrison, who serves on a mission team in Geita, Tanzania, with his wife, Christie.
Recently the couple had a group of young men in their home and bought sodas. Usually, Tanzanians prefer fruit-flavored drinks, but Coca-Cola was sponsoring a contest for an all-expenses-paid trip to the World Cup.
“Every single guy here took a Coca-Cola,” Brett Harrison said.
A STADIUM HORN SOUNDING CHANGE
But the significance of Africa’s first World Cup goes beyond penalty kicks and beverage marketing campaigns, religion scholars say.
When Tinyiko Sam Maluleke, president of the South African Council of Churches, attended a recent Christian conference in Edinburgh, Scotland, he carried a “vuvuzela.” The traditional South African stadium horn has become an infamous part of this year’s World Cup.
The council is an interdenominational group that fought against South Africa’s apartheid policies. Desmond Tutu is a past president.
In an interview with the UK Evangelical Alliance, Malukeke said, “I see the vuvuzela as a desperate attempt by Africa to be heard.”
“I thought there was a connection between that desire and this conference, which happens now at a time when … the Global South (that is Africa, Asia, Latin America) happens to be the place where the church is growing fastest,” he said, “and there’s a lot of vibrant Christian mission going on there.”
Dyron Daughrity, assistant professor of religion at Pepperdine University in Malibu, Calif., agrees. His new book, “The Changing World of Christianity,” details the global migration of the faith.
“Africa is today bearing the fruit of a century of concentrated Christian missions,” Daughrity told The Christian Chronicle. “While missions to Africa certainly continue, there is arguably a greater need for Africans to evangelize the West than for Westerners to evangelize Africa.”
AFTER GAMES, CHALLENGES REMAIN
The World Cup brings together the rich from around the world, but also the poor and marginalized, “the vulnerable people, the sex workers, the hawkers from all over the world,” Malukeke said.
“I think that the church should take care of those who can’t take care of themselves during this time,” he added.
After the tournament ends, Africa’s hurdles will remain, said Jeff Kenee, a Church of Christ missionary in Sebokeng, South Africa.
“Beyond the thrills of a world stage, there are those whose lives still face the consequences of an immoral lifestyle and the reality of HIV/AIDS,” he said. “(There are) still those who cannot see how they will feed themselves and their children today or even where they will find shelter for the next week.”
Joshua Ankiah, a native of South Africa, returned there recently with his wife and two children to do mission work.
He and other church members distributed fliers about the Gospel on the beach near Durban, South Africa, where locals and visitors watched the World Cup on big-screen TVs.
“The atmosphere at the beach is exhilarating, bustling with foreigners,” he said. “In a country where racial hatred still exists, we are hopeful and pray that the unity and camaraderie among the locals will continue well after the World Cup ends.
“In the meantime, we are truly enjoying the atmosphere.”