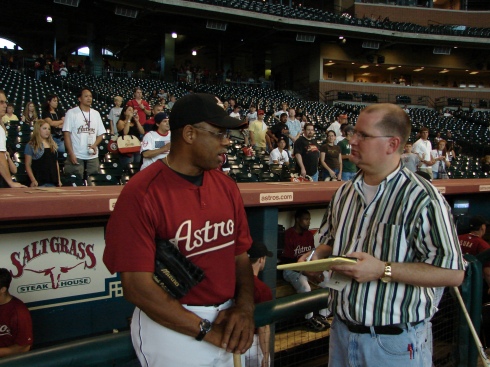 Cecil Cooper talks about faith and baseball in a 2006 interview with The Christian Chronicle. Cooper is interviewing for the Seattle Mariners’ manager’s job. (File photo by David Duncan)

I wrote an Inside Story column last May on former Houston Astros manager Cecil Cooper, a faithful Christian, adjusting to life out of baseball.
In that column, I wrote:

Cooper will be ready, too, when his next call to the big show comes.
He played in the World Series with the 1975 Boston Red Sox and the 1982 Milwaukee Brewers. He coached on the Astros’ 2005 World Series team.
“That’s kind of my mission,” he said. “I’d love to be able to do it and take a team myself.”

Earlier this week, The Seattle Times reported that he’s in the running to be the Mariners’ next manager:

Cecil Cooper, a former All-Star first baseman who lasted just one full season as Houston Astros manager, will interview for the Mariners’ managerial vacancy on Tuesday.
Cooper, 60, guided the Astros to an 86-75 record in 2008, an improvement of 13 games from 2007. But he was fired on Sept. 22, 2009, with the Astros mired at 70-79. His overall record at the helm was 171-170.
Cooper was hired by the Astros as interim manager on Aug. 27, 2007, replacing Phil Garner, who had been fired. Cooper had been Garner’s bench coach since 2005. After guiding the Astros to a 15-16 record to finish ’07, he was given the full-time position for the 2008 season.

Read the full story.
And today comes news that Cooper has inquired about the managerial opening of the Milwaukee Brewers, a team for which he was one of the best players in club history. The Milwaukee Journal Sentinel reports:

Cecil Cooper has made it clear to the Brewers that he would like to be their next manager.
I just got off the phone with Cooper and he said both he and his agent contacted Brewers general manager Doug Melvin to let  him know of Cooper’s interest in managing the club. Cooper said he has not heard back from Melvin, however.
“I think I would be a perfect fit,” said Cooper. “I hope they think so, too.”
Cooper obviously has a long history with the Brewers. He was one of the best players in club history in the late 70s and early 80s, and his decisive hit in Game 5 of the 1982 ALCS vs. California was just voted by fans as the Top Moment in the club’s 40-year history.

Read the full story.
From our archive, read an October 2006 Chronicle profile of Cooper.