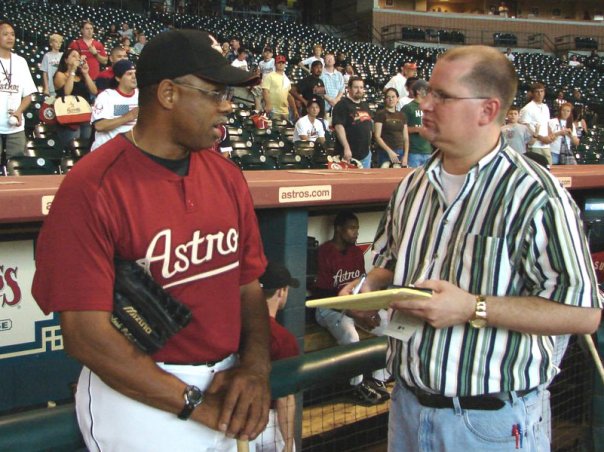 INSIDE STORY: Cecil Cooper adjusts to life out of baseball

Bobby Ross Jr.
KATY, Texas — “Brother Cooper?” I asked.
“Yes,” he said and smiled.
My friend David Duncan, my sons Brady and Keaton and I were meeting Cecil Cooper for breakfast at Cracker Barrel. But somehow we missed each other on the way in.
When I spotted him at a table across the room, I thought it was Cooper. However, he was wearing street clothes — not a major-league baseball uniform — so I had to ask.
A year ago, Cooper, 60, was starting his second full season — or so he thought — as manager of the Houston Astros.
Expectations were high after a 2008 season in which the Astros won 86 games, going 42-22 down the stretch. But the 2009 team struggled, and Cooper was fired last September. So this spring, after 41 seasons as a player, agent, coach and manager, Cooper finds himself at a strange place — home.
“I was having some tension here about a month ago when it came time to go,” acknowledged Cooper, a five-time All-Star during a 17-year playing career. “I started thinking, ‘Oh, I need to do something.’ I started feeling guilty because here I am at home.”
But while Cooper would love to manage again, he is a faithful Christian who has taken advantage of the opportunity to devote more time to his home congregation. “To be able to kind of reconnect is good,” said Cooper, a member of the Anderson Street Church of Christ in Sealy, 50 miles west of Houston.
He just finished a quarter teaching the Sunday adult Bible class and is leading the Wednesday night class. He’s working to organize a four-day Gospel meeting in July.
“We’re going to do a lot of door-knocking, a lot of advertising,” he said.
I first met Cooper during the 2006 season when he was serving as the Astros’ bench coach. I interviewed him before a game at Minute Maid Park. Duncan, minister of the Memorial Church of Christ in Houston, came along with me as the photographer.
At the time, I don’t think Cooper was familiar with The Christian Chronicle. From the beginning of that first conversation, he was friendly and helpful. But after he realized our Church of Christ connection, he seemed to open up.
As a result of that meeting, Cooper began attending the Memorial church’s early service before home games. He also accepted an invitation to lead singing and sign autographs after a Sunday night service as part of an outreach event at Memorial.
One night, Duncan was at his daughter Anna Beth’s youth basketball game when he heard someone calling, “David! David!” He turned around, and it was Cooper. They talked for a long time.
Now, on the one hand, that was impressive to me because I grew up collecting baseball cards — and Cooper was a star whose stats I memorized. On the other hand, it illustrated that Cooper is just a regular guy.
Another result of that first meeting was that Cooper started reading the Chronicle. So when I wrote a 2007 profile of Minnesota Twins bench coach Steve Liddle, a member of the Roseville, Minn., church, Cooper read the story.
Cooper and Joseph “Stretch” Suba, a fellow Christian and longtime Houston bullpen catcher and batting practice pitcher, made it a point to meet Liddle when the Astros played the Twins.
“Actually, I didn’t know Bobby Murcer was a member of the church until I read it in the Chronicle,” Cooper said, recalling the famed New York Yankees broadcaster and five-time All-Star who died of brain cancer in 2008.
Like their father, Brady, 16, and Keaton, 12, are big baseball fans, so they enjoyed meeting Cooper.
Brady, never one to turn down food, gladly accepted one of Cooper’s pancakes. Brady plays baseball but has been sidelined this season with a knee injury.
“So you’re rehabbing?” Cooper asked.
“Yeah,” Brady said.
“All right,” Cooper said. “What year?”
“A junior,” Brady replied.
“So you’ll be ready next year?” Cooper said, and Brady nodded.
Cooper will be ready, too, when his next call to the big show comes.
He played in the World Series with the 1975 Boston Red Sox and the 1982 Milwaukee Brewers. He coached on the Astros’ 2005 World Series team.
“That’s kind of my mission,” he said. “I’d love to be able to do it and take a team myself.”
Here’s hoping he gets that shot.
But if not, he’s already making an impact — an eternal one — right here at home.
Bobby Ross Jr. is Managing Editor of The Christian Chronicle. Reach him at [email protected]