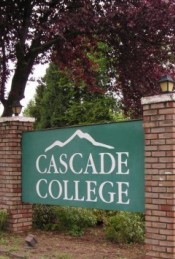 Staff
Cascade College in Portland, Ore., will close at the end of the spring 2009 semester, Oklahoma Christian University officials announced Monday, citing financial difficulties and other concerns. The news directly affects about 280 students and 45 full-time faculty and staff members.
Cascade opened as a satellite campus of Oklahoma Christian in August 1994 after financial issues forced Columbia Christian College — founded in 1956 — to close in the early 1990s.
“After 15 years of considerable effort and investment, we were unable to find a viable financial or academic model that would sustain and allow Cascade to flourish for the foreseeable future,” Don Millican, chairman of the Oklahoma Christian Board of Trustees, said in a statement. “Following much prayer and discussion, the board reluctantly voted to cease offering baccalaureate degrees at the Cascade campus next spring. This is one of the most difficult decisions the board has ever made.”
Millican expressed the board’s disappointment for “the students,faculty, staff and many others who worked so hard and gave of theirtime and financial resources to establish and maintain Christian highereducation in the Pacific Northwest.
“We will continue to work to help those students in the Northwestachieve their goal of a Christian education,” he said, commendingCascade President Bill Goad and “his outstanding team” for their workat Cascade.”
Oklahoma Christian President Mike O’Neal said he was “deeply saddenedthat closing Cascade became necessary,” but he agreed with the board’sdecision. The Oklahoma City university had subsidized Cascadeoperations with about $4 million, thousands of administrative staffhours and other resources over its 15 years as a satellite campus,O’Neal said.
“The current economic crisis was not a significant factor in thedecision, but it obviously did not help,” O’Neal said in a statement.”While the Cascade Board of Governors had sought a different result,after four years of intensive effort, they had been unable to develop afinancially and academically sustainable operation.
“The OC Board of Trustees and administration felt that it was notprudent for Oklahoma Christian to continue to subsidize that campus ata level sufficient to maintain a quality academic program.”

O’Neal also expressed great concern for the people most affected by the decision.
“We will go the extra mile in assisting the students to continue theireducation and the employees to find other employment during thetransition period,” he said. “The quality of the offerings on thatcampus will continue through spring 2009. We will also be sensitive tothe needs of Columbia Christian School, which uses a part of theCascade campus for their K-12 operations.”
Kerry Barnes, chairman of the Cascade Board of Governors, expressed histhanks for Oklahoma Christian’s investment in Pacific Northwest.
“OC has done much more than they agreed to do 15 years ago and much more than anyone would reasonably expect,” Barnes said.
Goad said he was thankful for the impact that Cascade and itspredecessor, Columbia Christian, have had in the Pacific Northwest formore than 50 years.
“I believe we have had a positive impact on thousands of young people,”Goad said. “We’ve been blessed with outstanding students and verydedicated faculty and staff who took a personal interest in ourstudents.  We’re also grateful to the many generous individuals andfamilies who have made significant contributions to Cascade over thepast few years.
“For the past six years, I have had the privilege of serving theCascade community,” he added. “My family and I have grown to love theCascade and Columbia Christian family. This decision brings a greatdeal of sadness, but I accept and support the decision of the Board ofTrustees.”
He also said that he would encourage Cascade students to finish theirdegrees at Oklahoma Christian if at all possible. His focus now will beon supporting the students and affected faculty and staff during thistime and assisting them in any way possible.
O’Neal added that Oklahoma Christian remains financially sound and willcontinue to honor all the endowments and financial commitments ofCascade College. He said Oklahoma Christian remains committed to thepeople of the Northwest.
“Through the creation of an endowment for students from the Northwestwe will seek to provide an opportunity for these young people to haveaccess to a high quality, affordable, faith based education,” O’Nealsaid. “It is our hope to prepare young people with a heart for ministrywho will return to the Northwest to nurture and strengthen the church.We will do everything we can do to continue strengthening the bond wehave with churches of Christ throughout the Northwest.