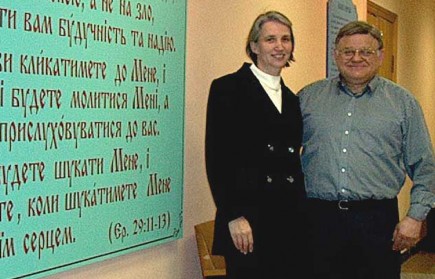 Erik Tryggestad
J. Rick Pinczuk, a longtime evangelist and pioneering missionary in Ukraine, died at 4 a.m. today in a Canadian hospital. He was 61.
Pinczuk was hospitalized several weeks ago after becoming seriously ill, said John M. Davis, minister the Ridgewood church in Beaumont, Texas, which supports Pinczuk’s Slavic Evangelism Ministry. Pinczuk and his wife, Carol, flew to Canada, where doctors discovered cancer in the minister’s liver, pancreas and kidneys, Davis said.
Survivors include his wife and daughters Larissa, Natasha and Eleah. Funeral arrangements are pending.
After the collapse of the Soviet Union, many Churches of Christ established ministries in the eastern, Russian-speaking region of Ukraine. Pinczuk, who helped establish and ministered for the Shevchenko church in the Ukrainian capital, Kiev, focused much of his work on Ukrainian speakers in the central and western parts of the country.
“While it is true that most people in the industrialized areas of Ukraine — primarily eastern — were forced to speak Russian by the Communists in the Soviet period, that is no reason for the church to follow this same trend and focus almost all evangelism and schools of preaching and publications in Russian areas alone,” Pinczuk told The Christian Chronicle in a 2003 interview.
Nonetheless, Pinczuk worked with Christians across Ukraine and was known as “a great encourager,” missionary Andrew Kelly said.
Kelly is executive director of Jeremiah’s Hope, a ministry for orphans in the Donetsk region of eastern Ukraine. The ministry is building a camp north of Kiev, Kelly said.
“Rick and Carol would often come up on Saturdays with a crew from the Shevchenko Church of Christ to build and collect garbage on the camp property,” Kelly said. The volunteers sang praises to God as they picked up trash.
“Rick was a man committed to sharing with the Ukrainian people the message of the cross,” Kelly said. “That commitment was evident not just through his teaching of the Word, but also through teaching Ukrainian Christians how to share their faith and time with those around them.”

A LIFE ON THREE CONTINENTS
Pinczuk’s parents left Ukraine in 1936 due to economic hardships and settled in Ansbach, Germany. During World War II, the Nazi regime forced the family into a detention camp, where two of their infant daughters died due to lack of food and medicine.
After the war a German family housed the Pinczuks. Rick Pinczuk was born in Germany in 1947. Three years later his father decided to move the family to Perth, Australia, instead of returning to Soviet-controlled Ukraine.

In Australia, Rick Pinczuk’s father taught his children the Bible as he searched for a place to worship. He met a group of American missionaries, including Rudy Wyatt, Ron Durham and Marvin Phillips, and became one of the first church members in Perth.
In 1967 Rick Pinczuk was baptized by missionary Mack Lyon, who later returned to the United States and became host of the television program, “In Search of the Lord’s Way.” The young Ukrainian Christian told the U.S. missionaries that he wanted to return to his homeland and spread the gospel. They encouraged him to pursue ministry training. One year after his baptism, Rick Pinczuk enrolled at Harding University in Searcy, Ark.
In America Pinczuk met Stephen Bilak, a fellow Ukrainian who also was forced into a German internment camp during World War II. Pinczuk helped Bilak move from Rochester, Mich., to Lausanne, Switzerland, where Bilak launched a radio ministry to reach people behind the Iron Curtain.
After graduating from Harding with degrees in Bible and journalism, Pinczuk preached for congregations in the Canadian provinces of Manitoba and Ontario. He studied Slavic languages at several Canadian universities. In Beamsville, Ontario, he launched the Slavic Evangelism Ministry, designed to recruit and train students for future evangelism in Ukraine. He also met his future wife, Ontario native Carol Bauman.
In 1985 the Ridgewood church took oversight of the Slavic Evangelism Ministry.
After the collapse of the Soviet Union, the Pinczuks made trips to Ukraine and helped establish a church in Kiev in the early 1990s. In the years that followed Slavic Evangelism Ministry distributed more than $800,000 of humanitarian aid to Ukrainians through Nashville, Tenn.-based Healing Hands International. The ministry also donated more than 60 “mini-libraries,” consisting of about 80 reference and study books in Russian and Ukrainian, to churches and schools of preaching in Ukraine. In 1997 the couple moved to Kiev.
“The biggest challenge for Churches of Christ in Ukraine is to remain active — not only spiritually and morally — but also in reaching out to meet the needs of the poor,” Pinczuk said in 2003. “Sponsoring churches should remain active in providing resources to churches on the field because poverty is still a major problem in Ukraine.
“One of the biggest discouragements is that churches are no sooner ‘established’ by brethren involved in short-term evangelism … (then) they are abandoned and new converts are forced to continue to teach themselves.”