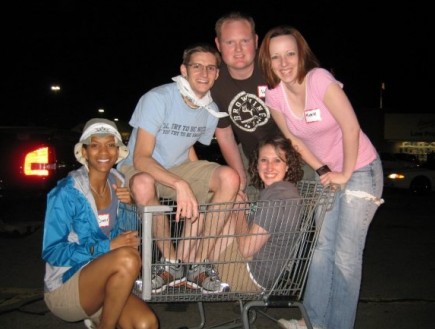 Bobby Ross Jr.
OKLAHOMA CITY — Nathan Mellor doesn’t see a single reason for Churches of Christ to reach out to unmarried Americans.
He sees 92 million.
That’s the estimated number of never-married, divorced and widowed men and women in the U.S. — about 42 percent of the adult population, according to the most recent Census data.
“If over 40 percent of Americans spoke Spanish or Chinese, we would learn Spanish or Chinese to meet the need,” said Mellor, a singles ministry leader at the Memorial Road church in Oklahoma City. “If 40 percent of Americans are single, it would seem to me that churches would also benefit greatly by learning how to minister to them as well.”
Mellor, vice president for community engagement at Oklahoma Christian University, served as chairman of the recent National Singles Ministry Conference. Held in conjunction with the university’s annual “Quest” event for equipping ministries, the conference drew 40 participants from five states.
Organizers launched a Web site at www.singlefactor.com as a place for singles ministries to share resources.
They plan a second conference next year.
“In addition, we are hopeful that our Christian colleges will consider adding singles ministry courses to their curriculum to better prepare future ministers to minister to this important group,” Mellor said.
Traditionally, churches have geared themselves more toward married couples and families than singles, said Gary Cochran, singles minister and licensed counselor at the Prestoncrest church in Dallas. That helps explain why children’s, youth and family ministries are much more prevalent than singles ministries — and why singles at most churches comprise a small fraction of their community’s overall singles population, said Cochran, who is 47 and single.
“We believe that this population has enormous potential and power. We want to give more time and energy to it,” he said. “We want to emphasize that they are valued and loved and that they are significant and vitally important in God’s kingdom.”

NO PLACE TO FIT IN?
Some experts blame declining membership in Churches of Christ nationally on the “graying of the pew” — churches marked by increasingly older memberships as young people leave.
The 2009 edition of Churches of Christ in the United States identifies 12,629 a cappella congregations with 1,578,281 adherents nationwide. Those figures represent 526 fewer churches and 78,436 fewer people in the pews than just six years ago.
“It just hurts me to see a lot of my friends my age turn away from the Church of Christ,” said Kyle Chandler, 27, who is single and involved with the 20s and 30s class at the Southwest church in Tigard, Ore.
The 2005 graduate of Harding University in Searcy, Ark., said about half his friends no longer attend a Church of Christ. “When I ask why, they say they just feel a disconnect with the Church of Christ when you are a young and single adult,” he said.
As many Americans wait longer to marry, single church members sometimes feel caught in the gap between their high school or college years and their eventual wedding, Chandler said.
“You are in that strange period in life of not being in college anymore but also not being married,” he said. “Many times, singles will not feel a part of the church. It is a hard feeling going to church by yourself and wondering if you will be noticed by anyone.”
Between 1970 and 2003, the median age of first marriages jumped four years — from 23 to 27 for men and from 21 to 25 for women, according to Census data.
Nichole Perrett, who is 30 and single, said she left a Church of Christ in Florida because she didn’t fit in.
Members, she said, would engage her in surface-level conversations: “How are you?” “How’s work?” Couples would ask her to babysit their children. Church leaders welcomed her teaching an elementary Sunday school class — as if that were a single woman’s only possible niche.
“I guess what I needed was to feel cared about and desired to be an active part,” Perrett said. “But no matter how much I asked, I still couldn’t find my way to be involved in more roles.
“I felt unheard and useless, and I wasn’t growing,” she said. “It’s a good church — good people — and they are doing great things for the Lord. It just wasn’t a good fit for me.”
ANY SINGLES IN YOUR COMMUNITY?
In recent months, Terry Fischer, young adult minister at the Memorial Road church, contacted a number of Oklahoma congregations to tell about planned areawide singles events, he said.
“Most ministers or church secretaries I talked to couldn’t think of singles in their congregations even though I know there are singles in their communities,” Fischer said. “There is valid concern we are not effectively reaching married people also, but the numbers would show that our outreach to singles lags way behind.”
In some cases, leaders view singles or the single life as defective and in need of fixing, Fischer said. But that neglects the true purpose of singles ministry, he said: to serve singles, help them serve others and assist them in spiritual growth.
Another challenge is that “single” refers to a diverse group of people. Of the 92 million unmarried Americans, 60 percent have never been married; 25 percent are divorced; and 15 percent are widowed.
“There is definitely a wide variety of singles, and it is difficult to define,” said Sherese Oles, 36, a Christian counselor never-married single active in the Claude, Texas, church. “It is hard for someone who has never been married to be put into a singles ministry with others that have had the experience of being married or having children.”
Despite the challenges, Mellor maintains that churches can’t ignore such a large group of unreached souls.
“If we could just reach 1 or 2 percent of the singles in America over the next few years,” he said, “it would double the size of Churches of Christ in the United States.”