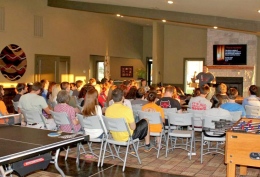 Campus ministry at Arkansas State University has a new home

Campus Minister Chris Buxton speaks at one of WolfLIFE’s weekly L.I.F.T.s (life intersecting faith together) where they discuss the Bible lesson of the week. (Photo via The Herald)

As reported by Arkansas State University’s The Herald:

The WolfLIFE Campus Ministry now has a brand new building on campus. The new building is 4,407 square feet with a large porch. It has several rooms such as a multipurpose room, a library, kitchen and an area for outdoor gatherings.
Construction began on the WolfLIFE Student Center in November of 2011 and was finished the week before the 2012 fall semester began. The new building can accommodate more than 120 people comfortably and has already caused an increase in the number of attendants.
WolfLIFE, formally known as the Church of Christ Student Center, has been serving ASU students since the early 1960s. Previously located in a small building beside Subway on the corner of Johnson and Caraway, the members of WolfLIFE are very grateful for their new accommodations.