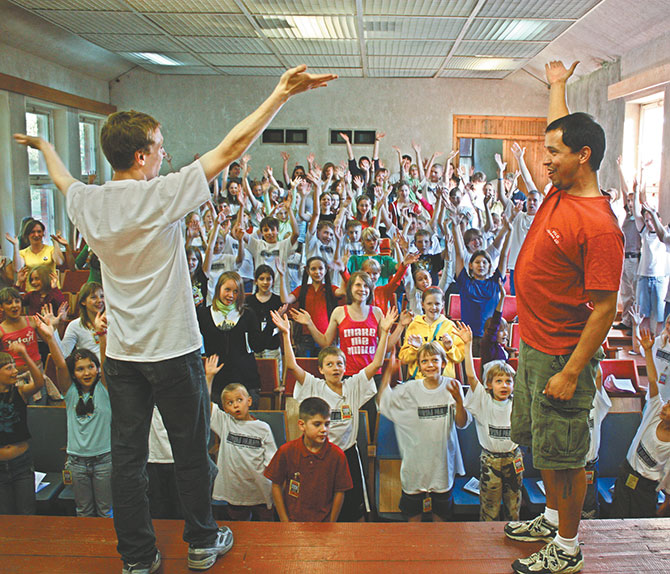 Camping for Christ in Lithuania

In this former soviet nation, church members tell the story of Christ at a camp once used to indoctrinate children with communist ideology. Many baptisms have resulted, but the dollar’s falling value and migration present challenges.

MOLETAI, LITHUANIA — Bleary-eyed campers file into the cantina on a typical overcast morning in this northern European nation.
As they devour plates of blynai — crepe-like pancakes filled with apples — Evelina Muchina prowls the rows of picnic tables, scanning for rule-breakers. Soon she finds one — a fellow camp counselor.
“Get your elbows off the table, Aloshia!” she sings, to the tune of “If You’re Happy and You Know It.” The campers jump to life, clapping and singing along.
“Round the mess hall you must go, you must go, YOU MUST GO!” they scream. Muchina picks a female camper to accompany Aloshia on the trek — holding hands the entire time.
A few tables away, Danny Dodd chuckles, remembering the first time he sent a Lithuanian on the short walk 10 years ago. When the camper returned, he asked, “Why was I punished so?”
A decade later, participants in the annual Christian camp realize the elbow rule is part of the fun. This year only a handful of staffers are from the Gateway church in Pensacola, Fla., where Dodd ministers. Most of the counselors at the weeklong camp are Lithuanian church members — many of them former campers.
Muchina, a member of the church in the Lithuanian city of Klaipeda, was 10 years old when she first attended Camp Ruta. She swam, sang and played sports, but she also saw Christ living in the counselors. She returns each year, hoping to show Christ to a new generation of campers.
“My life would be different without this camp,” Muchina said. “Now I don’t even imagine my life without it.”

A COMMUNIST-TURNED-CHRISTIAN CAMP
After breakfast and morning Bible classes, the campers head outside for sports. Rain forces them back into the leaky auditorium, where Gateway member Scott Jordan, the camp’s activities director, arranges a paper airplane war.
Rusne Gaidelyte, an 11-year-old Lithuanian, first heard about the camp through a friend. She attended last year, and came back for the hiking, crafts, songs and friendships, she said.
Lukas Hitas, 10, and his two brothers came to the camp from London. Their mother, a native Lithuanian, found the camp on the Internet.
“I think it’s the best camp ever,” Hitas said. “I like everything, except for the time when you have to go to bed — and the time when you have to wake up.”
Both children are too young to remember the days when a vast Iron Curtain separated their two countries. Camp Ruta, where they sing about being “wrapped up, tied up, tangled up in God” was a Young Pioneer camp, where children were taught the virtues of communism.
None of the 80 campers were born when Lithuania, the southernmost of the three Baltic states, became the first Soviet republic to declare independence. After sovereignty came in 1991, hundreds of Lithuanians signed up for Bible correspondence courses. 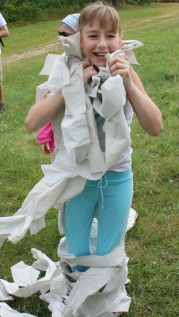 “I may never eat cepelinai*, drive an old German car, go for work to London. I may never win Eurovision**, but I’m in the Lord’s army. ‘We are, we are!'”

* Cepelinai: Regarded as Lithuania’s national dish, this large potato dumpling is named after the Zeppelin airship it resembles. Cepelinai usually is filled with meat or cheese curd.

** Eurovision: An annual song competition among European nations. The lyric “We are, we are” is from “We are the Winners” by LT United. The song was Lithuania’s entry in the 2006 Eurovision contest. It placed sixth.Dodd and Charles Myer Jr., both serving as ministers in Mississippi at the time, visited Lithuania in 1996.
Myer’s sister was a member of the Waterview church in Richardson, Texas, which had adopted Lithuania as a mission point.
The two ministers decided to launch a Christian camp. In 1998 Dodd, a longtime director of sessions at Sardis Lake Christian Camp in Batesville, Miss., brought a team of 18 American Christians to Camp Ruta, in the forested hills near Moletai, about an hour north of Lithuania’s capital, Vilnius.
“We had 57 kids,” Dodd said. “Our goal was 30.”
The Waterview church sponsored the camp until 2003. Now a group of American churches and individual members provide funds for the camp. The Enterprise Boulevard church in Lake Charles, La., oversees the work.
This year the Gateway church assisted with the camp’s first session, geared toward children ages 8 to 14.
Paul Franks, Enterprise Boulevard’s minister, brought a group of church members to help with the second session, designed for teens.
The declining value of the dollar against European currencies has increased travel expenses, Dodd said. The Americans have turned much of the camp’s administration over to Lithuanian church members.
Lithuania’s membership in the European Union presents another challenge. Hundreds of Lithuanians, including active church leaders, have left the country for higher-paying jobs in Denmark, England and Ireland.
“I think this will continue to be a major problem for the church and the camp,” Dodd said. “God willing, we will continue with the camps for the foreseeable future.”
‘SPIRITUAL HOLIDAY’
After a day of songs, Scriptures and sports, tired campers gather outside their cabins for a late-night devotional.
Though it is 9:30 p.m., northern Europe’s summertime sun is high in the sky.
Vladimir Rancev, a counselor from Vilnius church, said that one of his campers described the day’s events as a “spiritual holiday.”
“But when I go home, I will have to live without God,” the camper told Rancev.
Though most Lithuanians profess Christianity, church attendance is low, said Ilja Amosov, a minister for the Vilnius church who directed the camp with fellow minister Juozas Puodziukaitis.
Many children think of Jesus as a man “hanging on a cross,” Amosov said. “We tell them that Jesus is raised, he is alive. That’s what they need to experience.”
Camp Ruta is a major evangelistic tool for the church, Amosov said. Most of the attendees come from outside Churches of Christ.
Many of Lithuania’s church members were baptized at camp — including Tomas Dambrauskis, one of this year’s counselors.
Dambrauskis, a graduate student in Vilnius, first came to camp in 2000 after studying the Bible with members of the church in Klaipeda.
Seeing Christ in the lives of his counselors helped him decide to enter the watery grave of baptism. “I said to the guy who baptized me, ‘It’s a perfect day to die,’” he said.
Katie Foster, a college student and member of the team from the Gateway church, said the camp “shows me that we really can make a difference.”
“These kids are eager to learn about Christ, and that in itself encouraged me,” she said.
For students, Camp Ruta is “one of the most hands-on types of mission work there is,” said Ed Humphries, Gateway’s singles minister and former director of the camp. Regardless of their abilities, counselors can demonstrate “the joy and the peace … that come with Jesus.”
“Really, this summer camp is not any different than any summer camp that you’ve ever been to,” Humphries said. “I think the difference is that, for these kids, this is their introduction to that joy, that peace, that happiness. I love to be a part of it.”
FOR MORE INFORMATION, see www.vkb.lt.