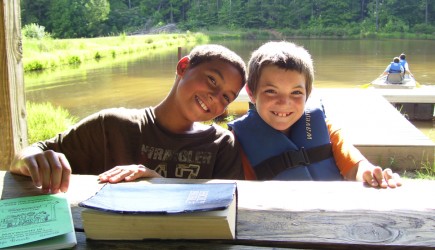 Bobby Ross Jr.
When is a child ready to be baptized? It’s a question faced frequently by Christian camps.
“The potential for playing on emotions is always there in a camp setting,” said Scott Billingsley, an adult volunteer at Sooner Youth Camp in Oklahoma. “The camp I attend tries not to do that, but when you’re hot and tired and feeling that ‘spiritual high’ … it’s easy for young people to become convinced they need to make a commitment for which they are not really prepared.”
But Dale Jenkins, a board member at Maywood Christian Camp in Alabama, said most campers who decide to be baptized have their hearts in the right place and understand what they’re doing.
“No, they do not know as much about sin, grace, atonement, repentance and a hundred other topics as they will five years down the road,” Jenkins said. “But I hope I don’t know as much about it now as I will five years down the road, and I’m pushing 50.”
Some camps, such as Camp Yamhill in Oregon and Camp Manatawny inPennsylvania, require a parent’s permission before baptizing a child.
“If the parents say no, we don’t do it,” Camp Yamhill manager NickMears said. “Sometimes, the directors still think the kid is ready, butthey have to follow the parent’s opinion.”
But at Mid-South Youth Camp in Tennessee, director Frank Bradford doesnot wait on a parent’s approval to baptize a child 13 or older.
“If someone knows what to do  to be saved, I will not hold them back,” Bradford said. “This could be the only time.”
Immediately after a baptism, however, Bradford asks the child to writein the notes section of his Bible at least 10 things he was thinkingbefore and after the baptism.