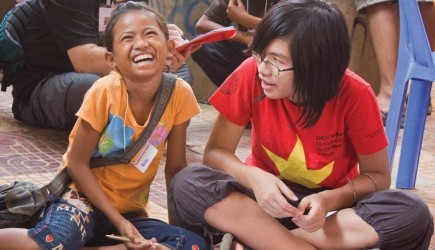 Erik Tryggestad
President and CEO
SIEM REAP, Cambodia — “Today I felt so embarrassed,” Vinod Brennaven said. The 15-year-old from Tampin, Malaysia, had just checked into his hotel for the Angkor of Faith youth camp.
“When I came out of the lodge, I heard a boy calling my name,” Brennaven said. “I couldn’t remember his.”
The Cambodian children who roam the streets of this tourist city, famous for the ancient Angkor Wat temples, don’t forget the teens who visit annually for the weeklong camp.
Launched four years ago, Angkor of Faith gives teens from countries including Japan, Malaysia, Singapore, the Philippines and Thailand the chance to interact as they serve food, host parties and play games with less fortunate children in Cambodia, one of the poorest countries in the world.
An estimated 24,000 children live and work on the streets of Cambodia, according to humanitarian groups. The country is a source of, and destination for, human trafficking. Children here are sold for sexual exploitation and forced labor, according to humantrafficking.org. Hotel rooms in Siem Reap post warnings for tourists not to engage in sex with children.
“They really need us. They need people to care for them,” said Aaron Wong, 16, a member of the Bedok Church of Christ in Singapore, who has attended Angkor of Faith since its beginning. “They live very simply, and they’re content with what they have — not like Singapore.”
A group of missionaries and Asian church leaders got the idea for the camp after visiting Siem Reap for the Asia Mission Forum, said Joel Osborne, a missionary in Japan, who coordinates the camp.
In addition to serving kids in Cambodia, Angkor of Faith gives young Christians a chance to connect with fellow believers across the region.
“It’s a good opportunity to give them a vision,” Osborne said.
The young Christians also have taken an expanded role in planning and coordinating camp activities — a promising sign for the future of the church in Southeast Asia, he added.
During the camp, the 80-plus participants were divided into “international groups” for meals and service projects. Using a common language, English, they prayed and sang hymns during spirited devotionals in the lodge’s common area. Some of their Cambodian friends watched.
“We have different cultures, but we have the same love for service,” said Mark Anthony Metilla, a church member in Davao, Philippines.
The teens found unique ways to serve during parties they hosted for more than 170 children. Some set up a hair-washing station while others played an aggressive, three-legged balloon pop game with the kids. Por Khumvan, a 17-year-old from Chiang Mai, Thailand, brought a huge box of fingernail paint and gave free manicures.
“I love to paint,” she said. “I do that in Chiang Mai as an outreach.”
Some older Cambodian children who have attended the parties in past years helped the teens serve the younger children, said Robert Reagan, a missionary in Chiang Mai.
“Plus, these same older kids helped as English teachers during our service projects to teach English in poor village schools,” Reagan said. “So we are now teaching the older street kids to serve the younger ones.”
Not all of the teens who participate in Angkor of Faith are Christians. Some are the children or friends of church members who heard about the camp and wanted to attend.
After seeing Christians in action, some attendees have decided to be baptized, Osborne said.
Several non-Christian Japanese teens told Reagan that they were moved by seeing the Cambodian children cry as they said their goodbyes.
“These (teens) said this is the first time they have felt the power of Christianity,” Reagan said.
Grace Ong, another member of the Bedok church in Singapore, has attended each Angkor of Faith and said she enjoys seeing the Cambodian kids “grow bigger, smarter and taller.”
Working with the youths also has forced the 18-year-old to ponder a problem faced by missionaries in many developing countries — showing charity without creating dependence.
“How can I help them without them becoming dependent on me … just handing out things?” she said.
As she shared steaming plates of rice and chicken with her international group, Ong said the camp has helped her become “more optimistic” back home.
In Singapore, many of her peers worry about which university they’ll attend. Few seem to realize how blessed they are to be able to choose a university at all.
“Of course I’m privileged … I get to choose what I want to wear and eat,” she said.
Brennavan agreed. He and Ong paid for their dinners — and meals for a few of their Cambodian friends — before heading back to the lodge. The next day he helped lead the children in a rousing chorus of “My God is so big, so strong and so mighty, there’s nothing my God cannot do.”
“It’s a one-of-a-kind experience,” he said. “I’m really glad I came.”
VIDEO: Youths in Southeast Asia sing and serve at Angkor of Faith