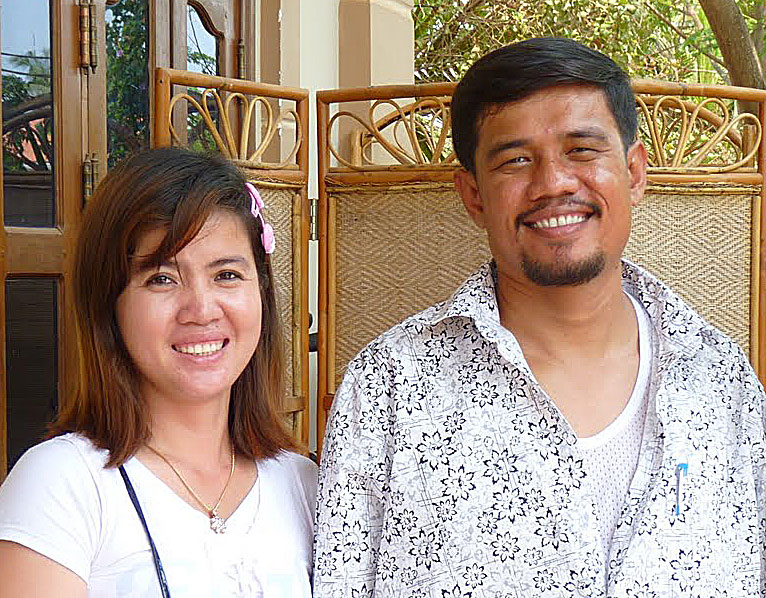 Tawn Lork and his wife, Navy, in Phnom Penh, Cambodia (Photo via randrdolan.blogspot.com)

Rich and Ronda Dolan, church members working with the Cambodia Bible Institute, report the death of the institute’s dean of students, Tawn Lork.
Lork, 33, was riding his motorcycle in northwestern Cambodia when he was hit by a drunk driver.  He died Dec. 26.
In a recent blog post, Ronda Dolan writes:

He loved God, he loved us and he loved our students. Tawn and Navy, his wife, lived at the school as he was the Dean of Students. He was wonderful at taking care of problems, helping the students with their studies, and was a mentor to them all. I can’t even imagine the school without him there.
He was a devout Bible student and well as effective preacher and teacher. God blessed him with a great personality, capable of reaching many with his kind words, smile, encouragement and belief in God.
He made our transition to Cambodia very easy as he was always here to help us.
Please pray for Navy, his wife. She has the sweetest heart, and now it is terribly hurt.

I had the honor of meeting Tawn and Navy earlier this year during a reporting trip to southeast Asia. This excerpt from a story I wrote about Churches of Christ in Cambodia gives a few details about Tawn’s conversion and ministry:

As the students play games with the village children and teach Bible lessons to young adults, Tawn Lork observes. He translates for the American teachers at the institute and helps with administration.
Lork’s brother, James, introduced him to the Gospel. James Lork ministers for the 75-member Phnom Penh Church of Christ. Two more brothers, Chann and Sokchea, preach in the city of Siem Reap.
Cambodians are inherent worshipers, Tawn Lork said. Most buildings have “spirit houses” — ornate, mailbox-size shrines meant to provide shelter for mystical beings that might otherwise cause trouble.
In the countryside, humble villages sit next to elaborate Buddhist temples.
“Some worship trees, ancestors,” Tawn Lork said. “People realize that there is someone higher.”
Cambodians are eager to hear the Gospel, but often think Jesus is one of many gods. Some claim to follow both Christianity and Buddhism, he said.
Some get baptized in hopes of receiving a.gif?Action=thumbnail&Width=460&algorithm=proportionalt, said Lor Sovann, a student at the institute. He remembers the first time Tawn Lork told him that Jesus died for his sins.
“At first, I didn’t believe him,” Sovann said. “I said, ‘I’m not a sinner.’” But after more Bible study and prayer, he came to the conclusion that he had sinned, and that “God has canceled the debt.”