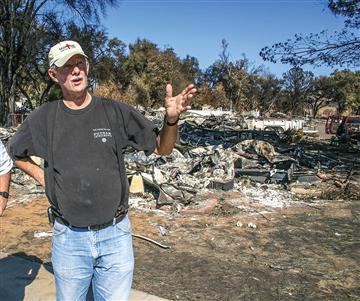 Volunteers with relief ministries associated with Churches of Christ survey the fire damage in a community near San Diego in 2007. (PHOTO BY ERIK TRYGGESTAD)

WHAT HAPPENED: Raging fires, visible from space, burned more than 500,000 acres. Nine people died, and at least two families from Churches of Christ in southern California lost their homes. (See our coverage of the wildfires.)

WHAT HELPED: An informal task force, representing multiple congregations, helped in planning and coordination, said Gilbert Oropeza, a member of the Canyon View Church of Christ in San Diego. Food boxes, cleaning supplies and disposable masks were useful as Californians wiped away the ash from their homes.

WHAT DIDN’T: In the early stages of recovery, churches received furniture, washers and dryers. Fire victims were unable to use these things until their homes were rebuilt, Oropeza said.

• After the disaster: Oklahoma family that survived tornado shares their story — and Bibles

• Help that helps: Advice from disaster responders and survivors