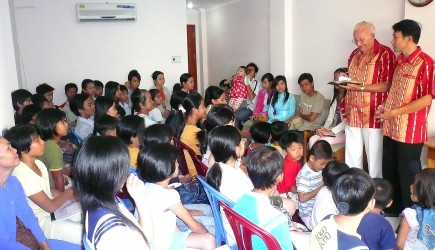 Erik Tryggestad
After 54 years of ministry — and thousands of nautical miles — Tom Tune has dropped anchor, perhaps for the last time.
The veteran missionary, who turns 79 in May, spent the past 17 years sailing the waters of the South Pacific. Captain of the Dorcas Sue, a 45-foot sailboat, Tune gave free eyeglasses and Bible lessons to the people of the South Pacific.
Recently, Tune’s voyages took him to a most unlikely mission point — Vietnam. There, in the former Saigon, he helps street children attend school and ministers to a growing group of believers.
Working in a communist nation can be a frightening experience, but Tune said that hasn’t stopped him from trying.
After all, sailing kind of scares him too.
“Sailing on the open ocean terrifies me,” he said. “I know boats and I have taught sailing and navigation, but I sail for the Lord — even though I am so afraid.
“I am more afraid not to.”
BOATS, EYEGLASSES AND DUCT TAPE
Born in Murray, Ky., Myles Thomas Tune joined the Navy at age 16, in the final days of World War II. At the end of his service, he moved to the Nashville, Tenn., area.
Raised in a Baptist church, Tune was introduced by his wife-to-be, Charlene Porch, to Churches of Christ. He was baptized, took classes at David Lipscomb College and started preaching. In 1961 he and his family moved to Hong Kong to serve as a missionaries. Tune built an elementary school and preached across the area, using a small cabin cruiser boat to reach remote fishing villages.
He encouraged his family to be involved in the mission — and sometimes he insisted, said son Mike Tune, minister for the Church of Christ in Falls Church, Va.
One Christmas, “Dad gathered a mountain of candy (and) led us in packaging it in small baggies and tying each one with a colorful ribbon,” Mike Tune said.
On a cold, windy Christmas Day, Tom Tune took his two sons out in the cabin cruiser. They threw bags of candy to children on the shores of the villages. They pulled alongside docked sanpans, 14-foot boats housing entire families, and gave out more candy.
“I hated the thought of going to sea on Christmas Day in that weather rather than staying home with my stuff,” Mike Tune said. “But it was one of my most fond and memorable Christmases.”
The Tunes returned to the U.S. in 1966. Tom Tune preached and worked a variety of jobs. In 1972, he and a group of church members bought The Christian Chronicle and moved it to Nashville. Tune served as the newspaper’s business manager for two years.
Longing to return to mission work, Tune bought the Dorcas Sue, which he named after his daughter, in 1979. He traveled to South America and the Mediterranean, delivering medicine, fitting the poor for eyeglasses and teaching about Jesus. In 1991 he sailed for Hong Kong. He stopped at the Cook Islands, where he found opportunities to serve the people of the South Pacific.
During their summer vacation in 2003, brothers Nic, Austin and Greg Gotcher met Tune in Nadi, Fiji, and spent several weeks sailing and assisting with his mission work. The Dorcas Sue “stuck out like a sore thumb among the newer, nicer, cleaner yachts” at the dock, said Greg Gotcher, now a student at Oklahoma State University in Stillwater, Okla. “It was a good boat, but very old.”
Tune and the Gotchers sailed among the islands of Tuvalu, preaching to small churches and giving eyeglasses to elderly fishermen. At one point, they had to rig the boat’s engine with duct tape to make it back to land.
Despite the challenges, “Sailing across the South Pacific with Tom Tune was one of the greatest experiences I have ever had,” Gotcher said. “His mission is to spread the word of God to as many people as he can.”
SERVING AND SAVING IN VIETNAM
“Tune’s nautical skills brought him to Vietnam  about five years ago, after Arkansas-based Partners in Progress asked him to oversee construction of a medical mission boat. Launched last March, the Ship of Life makes trips along the Mekong River in Cambodia.
During the boat’s construction, Tune started meeting with a handful of Vietnamese Christians.
Baptisms followed, and the group has since grown to more than 100.
“I was told not to teach or preach or I would get kicked out. The Lord only knows how I have managed to stay,” Tune said, adding that God “has blessed us so very much — as only he could.”
In addition to nurturing the young church, Tune has launched “Tom’s Kids,” a program for impoverished children in Ho Chi Minh City. Many of the children are descendants of Vietnamese who supported the Americans during the Vietnam War. They have little money or social status.
Through the program, Tune has helped more than 100 children leave the streets and enroll in public school.
After a lifetime of ministry, Tune shows no signs of stopping, his son said.
“He has served the Lord in Central America, South America, the Mediterranean and … has begun a church in a country where it is forbidden,” Mike Tune said. “He just keeps going.
“We’ve talked about what happens when he gets to the end of the road. He told me, ‘Plant me where I drop. I’ll rise with the people I love.’”
SUPPORT FOR “TOM’S KIDS” may be sent to P.O. Box 8453, Falls Church, VA 22041. Make checks payable to Amazing Grace International. For more information on Tom Tune’s ministry, contact the Smithfield Church of Christ in North Richland Hills, Texas, at (817) 281- 6800.