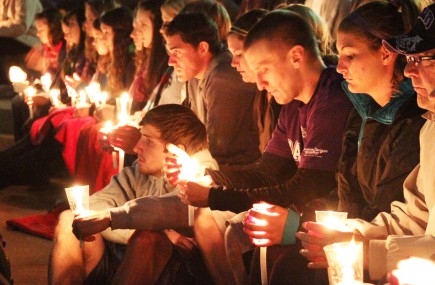 Most of all, she loved God.

Speaking to a crowd of more than 1,400 mourning the death of the Abilene Christian University student, Alex Wann described his 19-year-old girlfriend as a “totally righteous babe of the Lord.”

“I love you so much, but I love God more than you,” Wann said Reid told him, as reported by the Lubbock Avalanche-Journal. “She lived that kind of life.”

Reid, a sophomore at the Texas university, died Nov. 4 near Ballinger, Texas, about 85 miles south of Abilene. She was part of a 16-person mission team on a bus en route to an annual service project at the Medina Children’s Home in Texas.

The driver, ACU professor Michael Nicodemus, lost control and struck a concrete culvert. As the vehicle overturned, its canopy ripped away, ejecting 12 of its occupants.

• Pat Miller, wife of ACU professor Emmett Miller, was moved to hospice care in a coma, according to her family.

However, Emmett Miller later posted on his Facebook page: “Pat woke up and is very responsive. Asking about people. Still not for sure what has happened. Keep praying.”

• Naomi Cruz, a freshman from Richmond, Texas, was hospitalized in Abilene and later transferred to a hospital in Houston to be close to her home. She remained hospitalized at press time.

• Anna Ciufo, a freshman from The Woodlands, Texas, was flown from a hospital in San Angelo, Texas, to Dallas’ Parkland Medical Center. Ciufo was released after several surgeries.

Other victims of the crash were treated for injuries and released.

‘WE DON’T HAVE THE ANSWERS’

In Abilene, “the campus snapped into action the first moments after we first learned of the accident, either to help passengers and their families directly or to simply pray,” ACU spokesman Grant Rampy said.

“We had more people — students, fac ulty, staff and our ACU neighbors — turn out for a candlelight prayer service on the night of the accident than our outdoor amphitheater could hold,” Rampy said.

The university hosted additional prayer services in the days following the crash, including a chapel assembly dedicated to Reid that included prayers for those recovering.

“Our precious Anabel is in the arms of God this morning,” ACU President Phil Schubert said at the chapel assembly.

Other universities associated with Churches of Christ also paused to pray for the victims, including Lubbock Christian University.

Workers with the Arms of Hope ministry also mourned the loss and prayed for the injured. The ministry oversees the Medina Children’s Home, about 225 miles south of Abilene.

The ministry houses about 80 at-risk children and more than 50 single mothers and their children, said Kevin McDonald, Arms of Hope’s president and chief executive officer.

The annual mission trip to Medina would have been the seventh for Emmett Miller. The home relies on such trips to maintain the facilities, McDonald said. But the significance of such mission trips goes beyond maintenance.

“There are a lot of things here that go way deeper than just a group of students coming to work with some disadvantaged children,” McDonald told The Optimist, ACU’s student newspaper. “There’s a lot of relationships here.”

As the ACU community grapples with the loss, “we need to give people space to ask questions,” said Frances Green, campus minister for the Southern Hills Church of Christ in Abilene. “This creates a lot of hard questions, and we don’t have the answers.”

Steve Rowlands, director of ACU’s counseling center, said that the university must “find a new normal.”

“I want to make sure that, although this is a crucible moment, this is not a crippling moment,” he said.

In Lubbock, Texas, friends and family gathered to celebrate Reid’s life at the congregation where she grew up, the Broadway Church of Christ. Dozens more listened to an audiocast of the service at ACU’s welcome center, just yards away from Reid’s dormitory.

Reid was remembered as an outdoors enthusiast who loved kayaking, skydiving, zip-lining and mountain climbing — but hated fish.

Bill Starcher, minster for the Broadway church, said Reid had the kind of faith that wasn’t practiced only on Sundays.

“Whenever there were things to be done, she stayed until it was done,” Starcher said, according to the Abilene Reporter-News. “Anabel was always there to help.”

“She was my caffeine on the way home,” he said.

Haynes remembered Reid visiting him at the hospital when his daughter, Harper, was born.

Reid asked the youth minister if she could hold the newborn. “For a second, I thought she didn’t think I would let her,” Haynes said. “But I, of course, did.”

When he saw his daughter in Reid’s arms, he said, “I can honestly tell you, at that moment I prayed that Harper would become like Anabel.”

See links to additional reports on the ACU crash.

I can’t help but comment on what Ron has said. I understand the sentiment (it is one of hurting) but all I know is that Solomon said that “time and chance happen to all” in Ecc. 9:11. We live in a terrible tragic world and through no act of our Father does such a tragedy occur. It is truly sad that this has happened but what better place to be than Home (heaven). My prayer is for those left behind. God Bless!
Scott
Hope Church of Christ
Hope, Arkansas
Hempstead
As I read the comments of Ron from San Diego, I felt sad for him. God does not “do” things to His children. He gave us all freedom of choice. Sometimes the results of the choices we make are indeed disastrous. I am not saying the driver of the bus made a choice to have the accident, but choices made along the way led to the accident.
Linda
Watters Road Church of Christ
Pasadena, TX
USA
Emmett & Pat are my in-laws. I want to thank everyone for their prayers, for their incredible acts of love and care for them, our family, and the other crash victims and their families. The love of God and the outpouring of love and support from his the churches of Christ has been appreciated beyond words.
The faith I witnessed in the attitudes of the students and faculty that were on the bus their families has been a testament to God’s work in their lives, even in times of hardship.
God bless,
James Glasscock
James Glasscock
Troy Church of Christ
Troy, NY
USA
This sickens me to my very core. There go some of God’s children to do His work for some of the less fortunate and He does this to them. To what end do the trials come? I cannot understand how a loving father does this to his children
Ron
El Cajon Blvd.
San Diego, Ca.
U.S.A.
We were so deeply saddened to hear of your tragic loss. We will pray for your students and for the families who lost loved ones and continue to pray for the safety of your students as they do God’s work here and overseas. God Bless all of you.
Brandon Elliott
Montgomery Blvd COC
Albuquerque, NM
USA