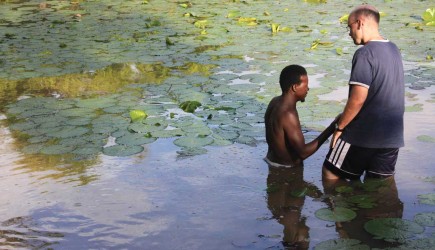 Burkina Faso: New life in a land of wooden crosses

Erik Tryggestad
Ur-gawn, Burkina Faso — Herman Hien was a Christian for all of 20 seconds before he performed his first baptism.
Missionary Andy Johnson baptized him in a lily pad-covered pond near the village of Ur-gawn, which means “a surpassing surprise” in the language of the Dagara, a tribe of about 300,000 souls in this West African nation.
Then, as the missionary waded to shore, Herman stood up, turned around and, along with another Dagara Christian, baptized a long line of villagers — face first, two by two. In all, 40 people came to Jesus.
Herman started studying the Bible about a year ago, after a friend in the nearby village of Mebar invited him to church.
“In Mebar I heard God’s word, and it made my heart feel good,” he said as Johnson interpreted. “So I wanted to go give my friends in this village the same thing.”
As he learned the good news, Herman shared it with the people of Ur-gawn. He invited Johnson to speak to the villagers about baptism. In the process, he decided that he needed to be immersed.
Christians from Mebar walked to Ur-gawn to witness the baptisms. One of them, Balondon Somé, stood at the water’s edge and shouted encouragement as the new Christians emerged.
“See, you died and now you’re up walking again,” she said.

‘TRAIN AND MULTIPLY’
Driving back home to Dano, a town of mud-brick buildings off a main highway, Johnson explained that his quick exit from the water after Herman’s baptism was by design. The missionary wants Dagara Christians to take the lead in evangelizing their people.
He and his wife, Melissa, and three other couples — Aaron and Andrea Burk, Chad and Amy Carter and Archie and Mandy Chankin — made the rocky red soil of this former French colony their home about six years ago.
The families met at Abilene Christian University in Texas. They studied language and ministry with a church in Lyon, France, before moving to Dano between 2002 and 2004. Here, they took lessons in the Dagara tongue. Last year the Chankins returned to the U.S. for health reasons, and Geoffrey and Suzanne Richter joined the team.
From Dano, the missionaries travel to rural Dagara villages, where they’ve helped plant more than 20 churches with a combined membership of close to 2,000.
“Some people would say that the Dagara are already evangelized,” said Stanislas Hien, a native of Dano and friend of the team, “but when you get out into the villages, you find that isn’t true.”
The word “Dagara” means “wooden cross.” Across the tribe’s lands, crude crosses of sticks, meant to ward off evil spirits, stand outside family compounds. Traditional beliefs here involve “a revenge mentality” — casting hexes on those who have wronged you, Chad Carter said. The church planters seek to replace the wooden crosses with “the humility of the Christian cross.”
To help the new Christians mature, Carter is guiding an effort to translate “Train and Multiply,” a leadership equipping series, into the Dagara written language.
Fewer than 10 books of the Bible are available in Dagara, said Stanislas, a Greek scholar who works for an affiliate of Wycliffe Bible Translators. His organization is working to translate the entire Bible into the country’s indigenous languages. The Dagara churches are “the most active” of those the organization serves, Stanislas said.
“The churches we’ve helped plant … can’t wait to get the stuff off the press,” Carter said.
As resources become available, and as young believers mature, the team plans to turn more of its work over to Dagara Christians, Aaron Burk said.
“As soon as we see a true church-planting movement, with mature Christians leading it, we will be more than willing to pass the baton,” he said. “This is what we’re striving for.”

‘CHILDREN OF CHRIST’
In recent years, Dagara churches have appointed elders and built houses of worship. Some write their own hymns — including one that translates as, “Hey church, visitors have come, let’s grab ’em!”
In the village of Yo-bagawn, Dagara Christians clapped their hands and slapped large, plastic containers as they sang during a recent devotional with visiting Americans. One woman shook a gourd covered with beads.
Such practices are rare among Churches of Christ in West Africa, and the Dagara team acknowledged that some Church of Christ members might not approve.
“We are trying our best to help plant churches that are in line with mainstream Church of Christ thinking,” Johnson said. “That said, most of the folks we’re working with don’t know the name ‘Church of Christ.’ … They just call themselves children of Christ.”
A few years ago, some Dagara church leaders traveled south to Ghana and worshiped with Churches of Christ there. They listened as the Ghanaians sang hymns translated from old American songbooks.
“Our folks enjoyed the Stamps-Baxter tunes — although they were a little puzzled by them,” Johnson said. The Ghanaians also enjoyed the Dagara hymns, he added, and said they were “excited about what the Spirit is doing among their cousins to the north.”
About Burkina Faso