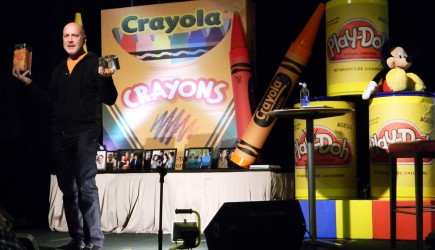 Building a lasting faith in teens

Bobby Ross Jr.
COLORADO SPRINGS, Colo. — Hey, Mom and Dad. The youth ministry needs you.
That message prevailed as more than 400 youth ministers from across the nation gathered in the shadow of Pikes Peak.
A focus on the family — not to be confused with Colorado Springs-based Focus on the Family — dominated the recent National Conference on Youth Ministries (NCYM).
“We are really concentrating on family this year, in an attempt to turn what has been called conventional youth ministry into a more generational approach,” said Dudley Chancey, an NCYM board member and youth ministry professor at Oklahoma Christian University in Oklahoma City.
Too often, youth ministries have made it easy for parents to abdicate their crucial role in raising teenagers of strong Christian faith, said Eric Fridge, family life minister of the First Colony Church of Christ in Sugar Land, Texas.
The attitude has been this, he said: “We’ll teach them. We’ll provide activities. We’ll help them discover their spiritual gifts. … Then when they’ve graduated, we’ll give them back.”
But Fridge said, “If parents don’t feel like a critical part of their child’s spiritual life, then we’ve missed a point.”
Unwittingly, youth ministry seems to have communicated the notion that parents can outsource the faith development of their children, said Johnny Markham, youth minister of the College Hills Church of Christ in Lebanon, Tenn., since 1990.
“We must point postmodern moms and dads back to the ancient truths found in Deuteronomy 6, where God clearly lays the responsibility of nurturing and shaping the faith of children at the feet of their parents,” said Markham, a 26-year youth ministry veteran.
Tim Hall, NCYM 2011 president, referred to the same biblical text.
“This isn’t a new concept but is simply rematerializing,” said Hall, director of student ministries for the Overland Park Church of Christ in Kansas. “This mandate from God has been around a long time.”

With the beautiful Rocky Mountains as a backdrop, youth ministers came to NCYM to network, praise God and receive professional-level training.
Rich Little, preaching minister of the University Church of Christ in Malibu, Calif., had a different goal: find a new youth minister.
“We’re looking for someone who can help empower our families to claim their parental responsibility to be the spiritual nurturers of their kids,” Little said. “So we’re not looking for a lone ranger.”
It’s obvious the old model hasn’t worked as many young people — children of seemingly terrific parents — keep leaving the faith, Little said.
“I think the realities and the statistics are causing us to rethink the model,” he said.
As youth activities coordinator for the Mayfair Church of Christ in Huntsville, Ala., Jenna Lupo leads regular Bible studies with high school girls.
Lupo also helps organize mission projects such as reaching out to the homeless.
“We see all these teenagers leaving the church when they’re finished with youth ministry,” Lupo said. “My goal is to be somebody that can help be a voice that pushes truth deeper into them.”
The Mayfair church’s youth ministry is working harder to involve families, she said.
To reflect that emphasis, the congregation even changed the titles of youth ministers Aubrey Wood and Cody King to “youth and family ministers.”
“Bringing the family in, that ultimately makes the teenagers more healthy, and that’s going to be better for them in the long run, better for the kingdom,” Lupo said.
At the Southwest Church of Christ in Jonesboro, Ark., parents serve alongside their teens in service projects — be it sorting cans at a food bank or sprucing up a school, youth minister Abbey Jackson said.
“I mean, like every week, we have over 40 to 50 adults investing in our teens’ lives,” Jackson said. “So we try to do a lot of stuff with family, but obviously, we have huge room to grow.”
MINISTRY IN THE DIGITAL AGE

Charlie Sells said he grew up in youth ministries where just a few parents were involved.
Changing that paradigm presents a challenge, said Sells, youth minister of the Argyle Church of Christ in Jacksonville, Fla.
But Sells said, “It’s even more important to have parents active in their kids’ life now than ever before. One of the big things that I’m tackling right now is social media with my kids.
“They’re always hooked in to Facebook or Twitter or on their cell phone. And some of them do have a problem with not being the same person online and offline.”
Jon Justice, youth minister of the Warrenton Church of Christ in Virginia for 12 years, echoed Sells’ concern.
“The students that I have now are so digitally connected that to sit and have a face-to-face with them is like sitting on nails,” Justice said. “They would much rather talk to me through a screen.”
He said he’d love to move to a more family-based approach to ministry.
His concern?
“For me, the tremendous roadblock is that we’ve spent 30, 40 years defining youth ministry as we do it (now),” Justice said. “And so, most of my parents … they trust spiritual development to me.
“I think that’s fraught with a lot of holes,” he added. “Even if I do a great job, what I have noticed is, if students don’t see it at home, they don’t care.
“They either judge it as false, not for their life, or just something the youth guy does, not for real life. So I think it’s a huge deal.”

PUTTING THE CONCEPT INTO PRACTICE

When David Rubio started in youth ministry 15 years ago, volunteers typically were 20-somethings, college students, young married couples and other “cool people.”
A mission trip might involve 20 students and three adult sponsors, said Rubio, youth minister of the Otter Creek Church of Christ in Brentwood, Tenn.
Now, Rubio said, he might invite teens’ parents not just to cook at a youth event but also to lead small-group Bible studies. He might enlist 10 parents to join 12 students on a mission trip.
“Nowadays, I don’t think it’s so outlandish to think I might have parents not just driving the bus but also sitting on the bus mentoring students on the three-and-a-half hour drive to Gatlinburg,” he said, referring to the youth group’s annual trip to Winterfest.
“We’ve heard for years that the most influential people in our students’ lives are their mother and their father,” Rubio said. “But it’s one thing to say ‘I know it,’ and it’s another thing to actually minister with that
in mind.”