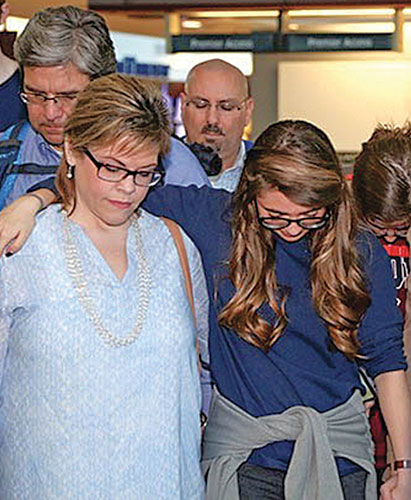 Those words, Flemish for “I am safe,” flashed across the social media feed of Paul Brazle, a longtime missionary in Belgium, just hours after terrorist attacks in the European nation killed 31 people and wounded about 270.

“We want you to know that we are safely well out of any harm’s way,” said Brazle, who lives with his wife, Carol, in Antwerp, about 30 minutes north of the scene of the attacks, Brussels. The couple spent the day “listening to the news carefully and waiting for news of any in our network who may have had reason to be in the airport … or near the one metro station in the Europa district where bombs went off.”

Rebecca Anderson, a 20-year-old sophomore at Freed-Hardeman University in Henderson, Tenn., was on an airplane from Greece bound for the Brussels airport when bombs exploded there.

“We were maybe an hour or two away when a voice came over the intercom and announced something in Greek, and then in English that the airport in Brussels was closed and that we were being rerouted to Dusseldorf, Germany,” Anderson told The Jackson Sun. “This was scary because we didn’t know what was going on until we actually landed.”

Anderson was part of a group of 19 Freed-Hardeman students, faculty and staff based in Belgium during a study abroad semester.

After terrorist attacks in Paris in November, school officials developed protocols for securing the students — who were spread across the continent at the time of the March 22 attacks in Brussels.

One group of students was visiting London and students from Lipscomb University in Nashville, Tenn. — another university associated with Churches of Christ that sponsors a Lipscomb in London study abroad program. When the Freed-Hardeman students were unable to return to Belgium, the Lipscomb students offered them a place to stay, Lipscomb officials told The Tennessean.

Richard and Barbara England, chaperone professors for the group, quickly located the students and coordinated with FHU officials as they considered next steps.

On March 29, the group returned to Tennessee. Freed-Hardeman President Joe Wiley shed tears as he welcomed the travelers home at the Nashville airport.

“Our prayers are that someday things will change and you will be able to travel back … but we felt it was more important that you be here,” he told the students. “While evil exists everywhere, the situation was such that we felt the risk was too great given the warnings, so we made that decision.”