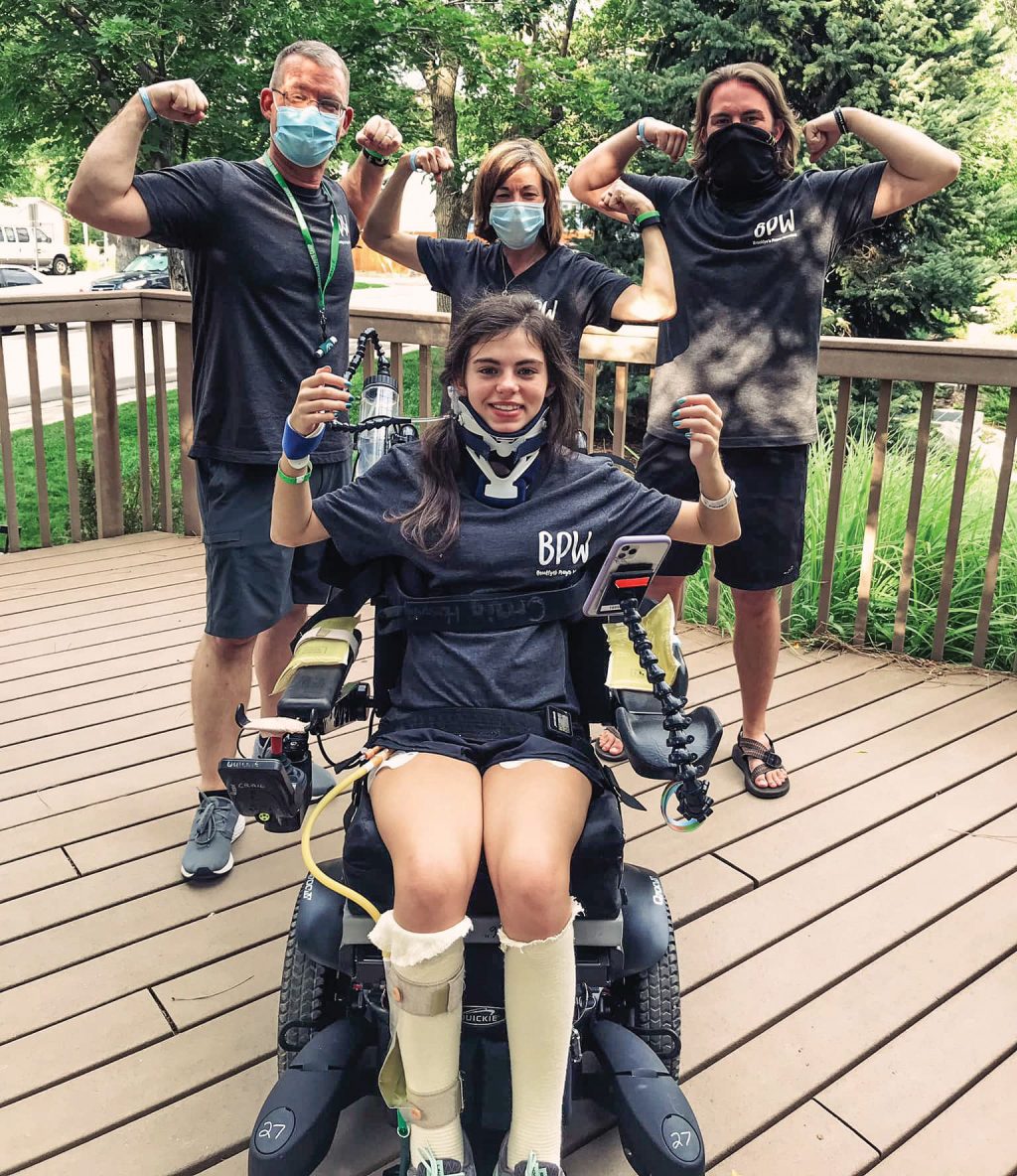 ‘The challenge is a blessing’

After a devastating accident, teen Christian inspires a global audience as she works to walk again.

Since the accident that put her in a wheelchair, Brooklyn Boyer has seen God at work every single day — through the tiniest of hand movements in rehab, through messages of support she’s received from believers around the globe and through countless serendipities that can’t be explained away as coincidence, said her brother, Tyler. 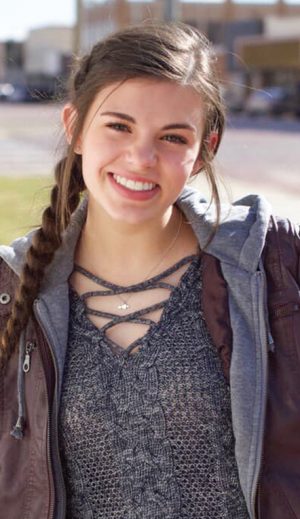 Now, “we’re waiting on, ‘Pick up your mat and walk,’” said Tyler, referencing Jesus’ words to the paralytic in John 5.

Tyler described his 17-year-old sister as “a total, bubbly little firecracker.” She’s a pole vaulter, track runner and volleyball player for her high school in Lubbock, Texas, where the family worships with the Sunset Church of Christ. Both parents, David and Tonia, teach in the School of Education at Lubbock Christian University, where Tyler, 22, just began his fifth year.

On June 10 Brooklyn was swimming at a friend’s house and went headfirst down a pool slide. She’s not sure what happened, but suddenly she was lying at the bottom, unable to move.

“The first thing I thought of was that I could feel God on the bottom of the pool with me,” she later told her family. “I’m going to be OK.” Her boyfriend was there and had just completed lifeguard training. He would know what to do.

He did. He and Brooklyn’s friends calmly pulled her to the surface and made sure she could breathe. They kept her in the water until paramedics arrived.

At the hospital the family learned that Brooklyn’s c5 vertebrae, at the base of her skull, was shattered. She had lost all feeling from her mid-chest down and had difficulty moving her arms and shoulders. She spent about two weeks in the Intensive Care Unit. Surgeons repaired the damage as best they could, her brother said.

On June 25 a line of surgical-masked hospital workers clapped and cheered as Brooklyn left Lubbock for Craig Hospital in Denver, which specializes in rehab for people with spinal cord and brain injuries.

“The first thing I thought of was that I could feel God on the bottom of the pool with me.”

The family posts updates on a Facebook page, BrooklynsWalk, which has been viewed by people in 43 countries, Tyler said. Each post has a list of requests for “BPWs,” Brooklyn’s Prayer Warriors.

They met one of their Prayer Warriors early on, in the ICU in Lubbock. A nurse there had been asked by her mom to pray for a girl she’d heard about who was injured in a swimming accident. The nurse did, and when she got to work she discovered that the girl she’d just prayed for was her patient.

“That’s just one example, I kid you not,” Tyler said of the providence his family has experienced since the injury. At least 50 such incidents have followed, Tyler said, adding, “God has been showing himself.”

Craig Day 58Brooklyn had a good day yesterday. Her classes included Be Fit, OT, PT, Assistive Technology, FES Bike, and best of all a family visit! Friday can sometimes be a harder day physically because it’s the end of the week and our fighter is TIRED. So her PT and Be Fit therapist had surprises for B. The PT took Brooklyn to get coffee at a place down the street from the hospital. (B stayed outside with me and therapist got the coffee, just so you know we are keeping her safe during COVID 😊) After getting coffee, they rolled around the neighborhood enjoying the beautiful weather. Then her Be Fit therapist took her outside for class. Little things that make a big difference. Brooklyn was very ready for bed last night and was looking forward to the weekend. BPWs: 1. COMPLETE healing. Our God is the Great Physician. 2. Emotional health. Especially late afternoon and evenings. 3. Restful weekend. Our warrior needs to refuel!4. Bs energy, stamina, endurance. 5. New movement and sensations in legs, fingers, wrists, triceps. BStrong in the Word: Psalm 91:11 (NLV)“For He will tell His angels to care for you and keep you in all your ways”We cannot say enough about Bs therapists, techs, and doctors. Many of them have become like family to us. They have grown to love Brooklyn and we love them! They truly care about B. Their job is not easy. They work with patients and families everyday who are facing life changing injuries. They have a special way of making Brooklyn work hard physically in an encouraging, supportive way. Yet they also care about her emotionally/mentally. They take time each day to see how she’s doing and talk to her before they begin therapy. Several are believers and pray for our warrior daily. Last week when B was really struggling emotionally, three of her nurses came to her room at shift change and spent time encouraging her. They did not have to do that. They could have gone home. But they took extra time to let B know they loved her. And that is not the first time someone on her team has come by after work to check on her. The team tells David and I about their discussions during rounds that allow every team member to know how Brooklyn is doing physically and emotionally. Their job description does not include painting nails, styling hair, buying coffee, giving hugs, coming by after work, or praying for their patient. So is it just “luck” that these people happened to be on our team? NOT A CHANCE. We prayed for Bs team before we came and KNOW God hand picked these angels on earth to minister to Brooklyn during this time. We see God’s presence daily and know He is with us. It is impossible to miss all the “God Things” that He provides. While we do not know where this path leads, we do know without a doubt who our guide is. Knowing God is leading us, gives us peace. Knowing his limitless power, gives us hope. Knowing He answers prayers, encourages us to pray boldly. Knowing God is still in control, strengthens our faith. We give thanks to Him for all the blessings he is pouring on our family. We praise Him for who He is! The BPW family is a “God Thing” we never anticipated when this journey began. But God did! We thank God for you and the many ways you are supporting our family. What a blessing the BPWs are! Brooklyn wanted you to know she is especially thankful for each of you and your faithful prayers on her behalf. (See video)God’s Still Got This, Brooklyn, Tyler, Tonia and David

Posted by BrooklynsWalk on Saturday, August 22, 2020

In Denver, Brooklyn recently began water therapy. It was her first time in a pool since the accident.

Her mother feared it would be traumatic. But as she listened to songs by Harry Styles (Brooklyn’s choice) she did stretches, moved her arms and even used a snorkel. She was calm, relaxed. She laughed.

“My momma heart was bursting with relief and thankfulness,” Tonia Boyer said. “Brooklyn is brave — not by her own might, but because she is confident that the Lord is good and that he is working in her.” 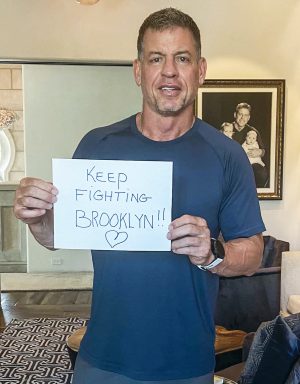 Brooklyn Boyer gets an encouraging message from Troy Aikman.

She’s received messages of support from churches in South Korea and Uganda, from Texas Gov. Greg Abbott (who is himself paralyzed) and from former Dallas Cowboys quarterback Troy Aikman.

Tyler said that one of his longtime friends, who had struggled with his faith, recently told him that seeing Brooklyn’s example had convinced him to reconnect with his church.

The journey “is not without tears, some days, and frustration,” her brother said.

Brooklyn doesn’t know if she’ll walk again, but “she knows that, regardless, God is going to use her, and he already has used her.”

In a recent video post, Brooklyn spoke to her teammates at school, encouraging them to obey their coaches, to “yap and clap” and to glorify God in everything they do.

TO CONTRIBUTE to a fund for the Boyers’ medical expenses, see the GoFundMe.com page Banding Together for Brooklyn Boyer or call the Sunset Church of Christ at (806) 792-5191.