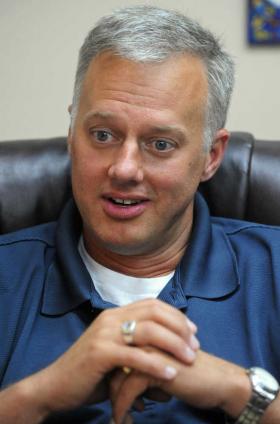 Broadcaster-turned-minister trades one dream job for another

The Amarillo Globe-News in Texas reports:

Allan Stanglin had finally made the big time. The climb had been a rough one, but starting out at KGRO-AM in Pampa 22 years ago — living with wife Carrie-Anne in a drafty apartment, scraping together pocket change for weekend groceries — had been worth it.
Three moves later, including a one-year stint in Memphis, Tenn., he returned to his native Dallas. He was sports director of KRLD-AM in Dallas, one of the nation’s premier sports radio stations. It controlled the Texas Rangers’ broadcast rights and Stanglin had an office and a parking spot at the Ballpark in Arlington.
He was part of the KRLD team that covered the Cowboys at home, and he flew on the away charter flights. He was in charge of a four-person sports staff at the station he and his dad grew up listening to. He and Carrie-Anne and their three daughters had a dream home in Arlington.
“It was a blast. It was my dream job, always had been,” he said. “I was living life and loving it. Then God started knocking on the door and messed everything up.”
Stanglin’s previous life dominates the office of his new life as minister of Amarillo’s Central Church of Christ.