INSIDE STORY: Bringing salt and light to journalism

Bobby Ross Jr.
SEARCY, Ark. — Not long ago, I had the privilege to speak to a media and religion class at Harding University.
Jim Miller, an assistant professor of communication, asked me to visit with aspiring young journalists about being “salt and light” in their profession.
As someone who has made a 20-year career out of writing news stories — for The Oklahoman, The Associated Press and now The Christian Chronicle — I did my best to offer helpful advice.
No doubt, the media industry faces challenging times right now with daily newspaper readership declining.
The future outlook for reporting and editing careers seems uncertain amid rapid changes in technology and approaches.
Yet journalism remains — in my humble opinion — a noble profession, one that could benefit immensely from more practitioners with Christian perspectives.
With that in mind, I suggested three main ways that the Harding students might live out their Christian faith as journalists.
• First, I urged the students to “plant a seed” in their reporting.

As Jesus shared in a parable in Matthew 13, when a farmer scatters seeds, birds come and eat some of them. Some seeds fall on rocky places without much soil. Other seeds fall among thorns, which choke the plants. Still other seeds fall on good soil and produce a crop 100, 60 or 30 times what was sown.

But the farmer does not control what happens to the seeds. His only role is to plant the seeds.

A journalist’s role is to report facts accurately, fairly and fully — and then plant a seed in the form of a story.

A journalist can control what he or she writes, but not how people respond to it. 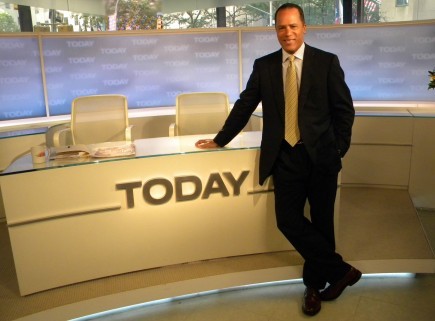 I cannot separate my faith from who I am any more than I can the color of my skin. Both give me greater sensitivity to certain types of stories and also allow me to bring an insider perspective on some issues.

Yet, at the same time, my place as both a Christian and a journalist is not to judge. My success as a journalist is based on respecting the opinions and thoughts of those whom I cover. If I give voice to all relevant sides of an issue or debate, with proper context and perspective, then the viewers can formulate their own opinions.

Amen, brother. (By the way, I had a chance to visit with Lester while in New York recently. Look for my story on him in an upcoming Chronicle.)
• Second, I urged the students to “shine a light” as journalists.
One of my journalistic heroes is Jerry Mitchell, an award-winning investigative reporter. Jerry also happens to be a Church of Christ member and Harding graduate. (See related news story.)

Jerry Mitchell displays his newspaper’s banner headline after reputed Ku Klux Klan leader Edgar Ray Killen was convicted in the 1964 killings of three civil rights workers. (PHOTO BY BOBBY ROSS JR.) Newsweek recounted how Jerry has published “story after meticulously sourced story … uncovering decades-old, secret documents that shine light on the darkest corners of Mississippi’s past.”
And what motivates this journalist? Jerry believes in a God of justice.
As some point, most journalists run into a religious person who urges them not to report a story because it could hurt God’s work or the church. It’s the kind of crazy argument that advocates hiding cases of religious leaders abusing children because of the bad publicity.
Certainly, journalists should listen to reasonable concerns about stories they pursue, but not give in to flimsy excuses. God can survive a newspaper story just fine.
• Third, I urged the students to “apply the golden rule” in their work.

That means, quite simply, do unto others as you would have others do unto you.
How do you treat a grieving relative when called upon to report on a school shooting or a plane crash? Do you push a digital recorder or a video camera into their face without permission? Or do you afford them the sensitivity and respect that you would appreciate yourself?
For the Christian journalist, the answer to each of these questions is pretty easy.
People are more important than any sound bite or headline. If you have to sacrifice your own morals or integrity to get a story, the story isn’t worth it.
Bobby Ross Jr. is Managing Editor of The Christian Chronicle. Reach him at [email protected]