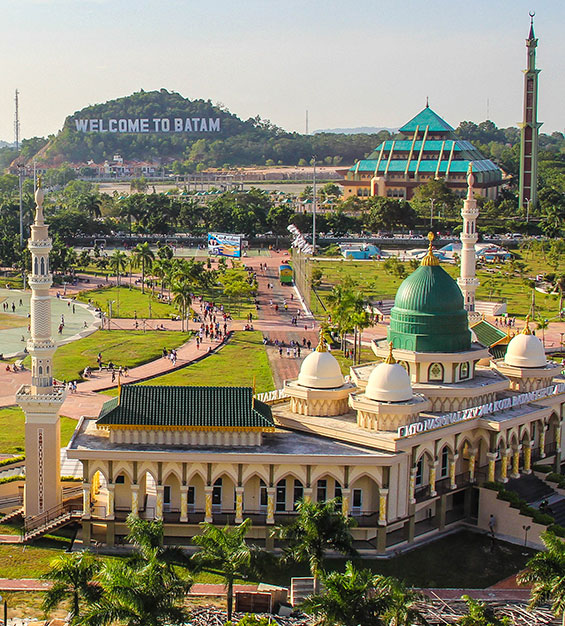 Bringing Christ to a Muslim world

Welcome to Indonesia, home to more followers of Islam than any other country — and ripe for the Gospel, workers say.

Erik Tryggestad
President and CEO
BATAM, Indonesia — The sun rises over the minarets of massive, ornate mosques on a Sunday morning. Light cuts through the steamy, Southeast Asian haze.

• Churches That Work: A pillar congregation for Southeast Asia

• A year of jubilee in Singapore

Locals and tourists from nearby Singapore dodge fast-moving motorbikes as they make their way to the Batam Centre Mega Mall.

Inside, teenage girls wearing hijab head scarves cluster around tables at Starbucks, giggling as they send text messages from their phones.

A few blocks away, off a road of gravel and dirt, Christians trickle into a small, white building bearing the words “Jemaat Kristus,” or Church of Christ.

Children kick off their shoes at the classroom door. Inside, they stomp their feet and sing “I’m in the Lord’s Army” in the Indonesian language, led by their teacher, Forlandya Simanjutak.

They are very much the minority in Indonesia, a country comprised of 17,508 islands. The world’s fourth most populous nation, nearly 88 percent of its 252 million souls claim Islam as their faith. Though more than 4,100 miles from the Arabian Peninsula, Indonesia is home to more Muslims than any other nation on earth.

However, “what is good in Indonesia is that we can bring the Gospel to the Muslims,” says Herbin Simanjuntak, an Indonesian evangelist and administrator for the Batam Bible College. Unlike many nations where Islam is the dominant faith, conversion to Christianity here is legal. 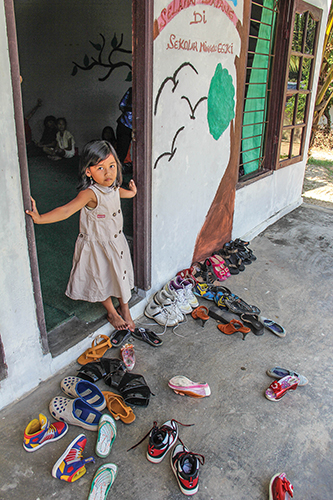 Children’s shoes line the door of a classroom at the Batam Church of Christ. (PHOTO BY ERIK TRYGGESTAD) 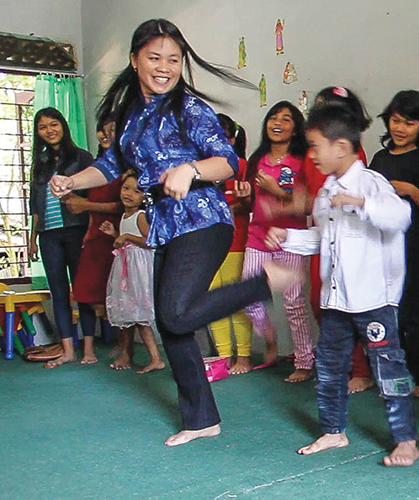 from converts to disciples
That doesn’t mean conversion is easy, the minister says. Family ties to religion are strong, and leaving your faith tradition — be it Islam, a Christian denomination or other — can mean alienation.

“If I die, who will perform the funeral?” is a common concern voiced by the parents of converts, says Herbin Simanjuntak, who grew up in a Lutheran family before he met Winston Bolt, a missionary from the U.S., and was baptized in 1993. 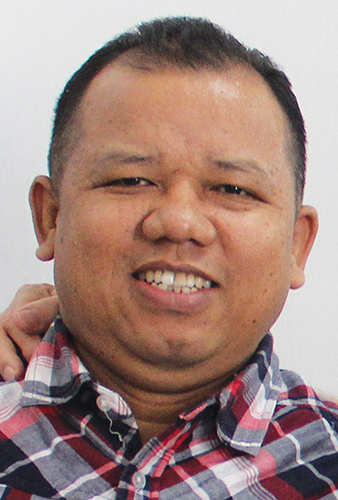 Herbin Simanjuntak
Despite the challenges, there are untold numbers of spiritual seekers among the islands, says Bolt, who moved to the jungles of Indonesia’s Papua region in 1987 after completing studies at Sunset International Bible Institute in Lubbock, Texas. He taught English and the Bible, working among the people of West Java and South Sulawesi.

On a visit to Singapore, Bolt preached for the Pasir Panjang Church of Christ. Its minister, Henry Kong, asked Bolt to plant a church in Batam — a small Indonesian island less than an hour south of Singapore by ferry. The missionary did just that, and in 1998 launched the Batam Bible College with a class of five men to train future preachers.

Now the college, a branch campus of Sunset, meets in a 10,000-square-foot facility that houses students from across Indonesia. More than 130 have graduated and assisted in planting 60 Churches of Christ. The school has extension programs throughout the country.

Winston Bolt speaks during Bible class at the Batam Church of Christ. (Read Erik Tryggestad’s Road Notes about Bolt’s transformation from prison bars to the mission field.)
Though he rejoices over the growth he’s seen, Bolt laments that few congregations have appointed elders — and that many rely on one-man leadership and foreign support.

Recently he and the Indonesian staff at the Bible college have focused on discipling — training Christians to be active in evangelism. The staff encourages Churches of Christ to launch small-group ministries with the goals of building relationships and raising up indigenous church leaders for the future.

Bolt cites the Great Commission in Matthew 28, where Jesus urges his followers to “go and make disciples of all nations, baptizing them in the name of the Father and of the Son and of the Holy Spirit, and teaching them to obey everything I have commanded you.”

“It’s dawned on me that we’ve jumped that part of it,” Bolt says. “We’ve baptized, we’ve preached, but we haven’t made disciples. … There’s a word we have in Indonesian that you don’t have in English — sahabat, your best and closest friend, and that is what disciples become.” 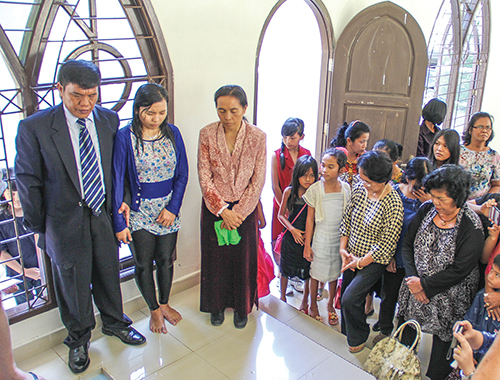 Newly baptized Esther Pasaribu stands between her parents as her father leads a prayer. Pasaribu grew up in the Batam Church of Christ, founded in 1992. The congregation built its own meeting place and has indigenous leaders. (PHOTO BY ERIK TRYGGESTAD)
next generations of faith
As the church service concludes in Batam, Esther Pasaribu walks forward and asks to be baptized. The 17-year-old grew up in the church here. Two months earlier, her brother Abraham was baptized.

“She believes Jesus is the Savior, and she wants to be saved,” Bolt says, smiling as he translates her words to English.

“Jesus has continually blessed her,” he adds, recalling when her parents made the same baptism request.

Spreading the Gospel in this predominantly Muslim country won’t be done through massive campaigns, Bolt says.

Rather than trying to convert every person they see, Christians must “look for the man of peace,” he says. “Look for the person that God is calling and focus on him.” These individuals can help transform entire communities.

“It’s about looking for those people who are searching,” he says. “That’s why we’re here.” 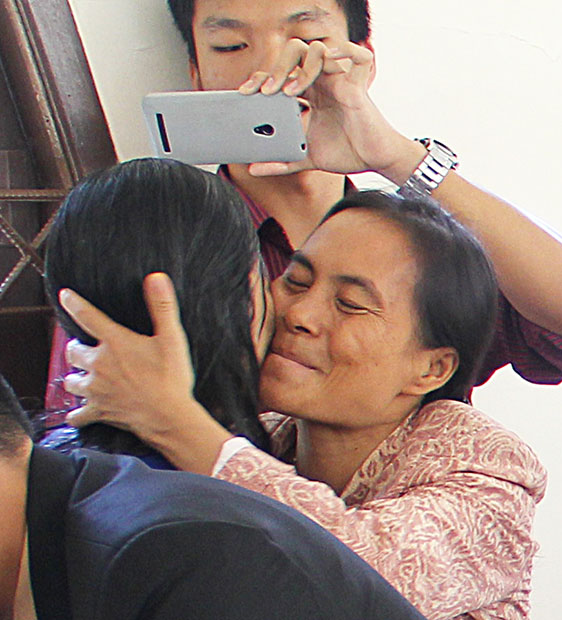 After her baptism, Esther Pasaribu gets a hug from her mother. (PHOTO BY ERIK TRYGGESTAD)

Filed under: From The East Headlines - Secondary International Top Stories