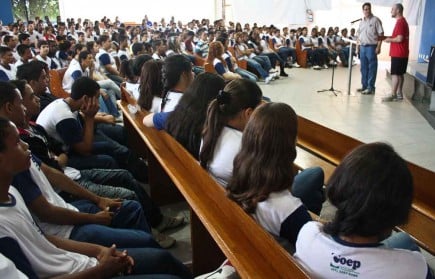 Erik Tryggestad
VITORIA, Brazil — A young man dressed in robes takes center stage at the Vitoria Church of Christ. As a simple Brazilian pop song plays through the church’s loudspeakers, he takes the hand of a young woman and leads her through a series of dance steps. She smiles serenely.
Other youths join the couple on stage. One convinces the young woman to gaze into a mirror and fixate on her appearance. Another offers her a drink. A third hands her something to smoke. The young woman soon realizes she’s surrounded. She lunges toward the young man in robes, but the other youths hold her back.
She falls to her knees.
As the pop song hits a crescendo, the robed youth throws himself between the girl and her oppressors, sacrificing himself for her freedom.
The auditorium, packed with youths wearing blue and white T-shirts, erupts in cheers.
This isn’t a church service — it’s not even Sunday. Nor is it a Christian youth rally.
It’s a government-sponsored jobs-training program.
The Vitoria-based program, COEP, seeks to end unfair economic practices, including child labor, by giving young people the skills — and the character — to function in society as professionals.
Two years ago, program officials approached the Church of Christ about using its large facility, located across the street from a university, for its classes. COEP pays rent and utilities.
The 400-plus students who participate in the program get daily doses of the Gospel during character classes taught by the church’s minister, Luiz Carlos Matias.
COEP pays the youths — many from economically disadvantaged communities in Brazil’s interior — to attend seven months of jobs-training classes. Businesses then provide internships for the students.
The students also attend chapel services conducted by Matias. On a recent Monday, their clapping shook the building’s rafters as they sang devotional songs in Portuguese.
A mission team from the Memorial Road Church of Christ in Oklahoma City sang English hymns for the students. Team members Aaron Lewis and Alan Middleton gave devotional talks. Then, groups of students about to complete the program presented skits about the values they had learned in the past seven months.
“I adored them,” Renata Goncalves said of the students’ performance. She and her classmate, Laurromy Couto, said the jobs-training program has provided them with friends from across the region and opportunities they wouldn’t have in their home communities.
The two students, who attend evangelical Christian churches, said they also appreciate the program’s spiritual focus.
Matias hopes that the church’s involvement in the classes will result in more Christians in the pews on Sundays. When students express interest in the Church of Christ, the minister invites them to participate in a theology course overseen by the congregation. Bible studies and baptisms have resulted from the course, he said.
Hosting the jobs-training program also allows the church to “set a good example in the community,” Matias said. “Everywhere we go, the church is known.” 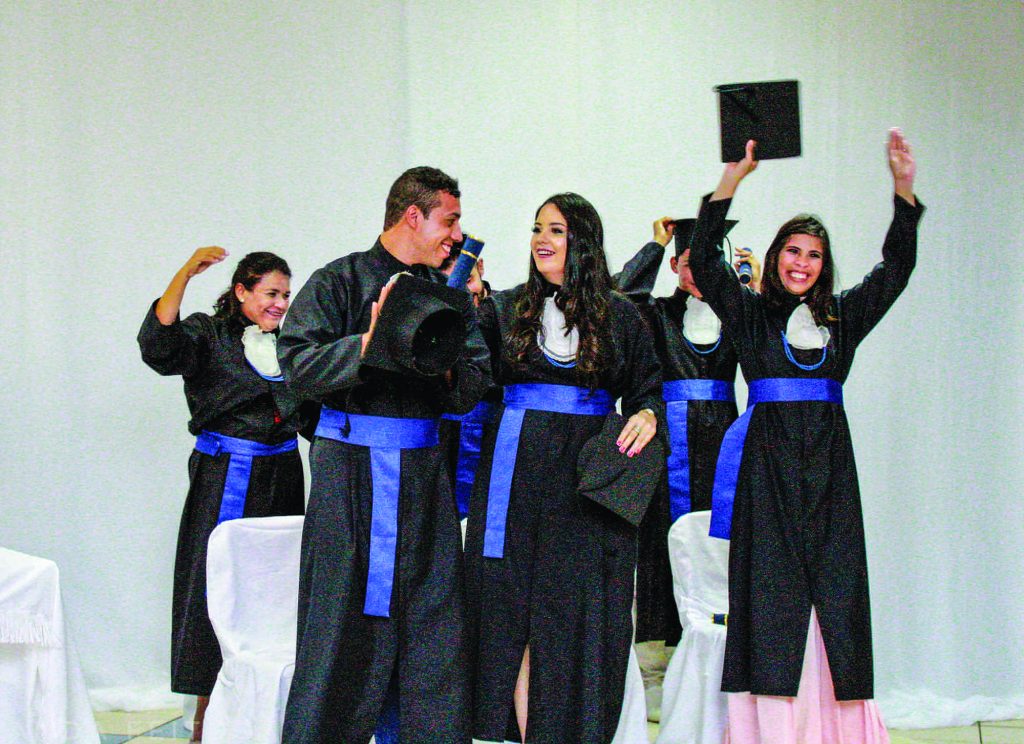