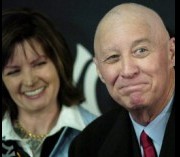 Bobby Ross Jr.
OKLAHOMA CITY — New York Yankees legend Bobby Murcer, a member of the Memorial Road church in Oklahoma City, died Saturday after an 18-month battle with brain cancer, the team said. He was 62.
“Bobby Murcer was a born Yankee, a great guy, very well-liked and a true friend of mine,” Yankees owner George Steinbrenner said in a statement. “I extend my deepest sympathies to his wife Kay, their children and grandchildren. I will really miss the guy.”
In a statement, baseball commissioner Bud Selig said: “All of Major League Baseball is saddened today by the passing of Bobby Murcer, particularly on the eve of this historic All-Star Game at Yankee Stadium (on Tuesday night), a place he called home for so many years.
“Bobby was agentleman, a great ambassador for baseball, and a true leader both onand off the field,” Selig said “He was a man of great heart and compassion and mademany wonderful contributions to the Baseball Assistance Team and to thegame. All of us in baseball will miss him. We pass on our sympathiesand condolences to his family and to his many friends.”
Murcer, a Yankees broadcaster and former five-time All-Star, relied on his faith throughout his cancer ordeal.
In a March 2007 interview with The Christian Chronicle, Murcer recalled the night before his Dec. 28, 2006, surgery to remove a brain tumor slightly larger than a golf ball.
Murcer and his family read apassage from Deuteronomy 31 that his brother-in-law Dwaine Rhodes saidhad helped him through trials and tribulations. Verse 6 reads: “Bestrong and courageous. Do not be afraid or terrified because of them,for the Lord your God goes with you; he will never leave you norforsake you.”
“We took that and we read that every day because it gives us great strength,” Murcer said. “We know God will never forsake us.”
“My faith believes that God has healed mealready,” he told the Chronicle. “I can’t imagine any other thing because I justthink that’s what his promise is for me.”
Besides teaching him to take life one day at a time, Murcer said in the 2007 interview, his cancer fight strengthened his faith.
“Ithink God tests us with our faith, and sometimes, he has to get ourattention to bring us back on the railroad tracks,” he told the Chronicle. “Everybodythinks they’re in charge of their own life, and I’ve come to find outthat I’m not really in charge of my own life.
“It’s not what my will is. It’s what God’s will is,” he added. “And whatever his will is, it’s fine with us.”

TheYankees said Murcer died Saturday afternoon surrounded by relatives atMercy Hospital in Oklahoma City. He succumbed to complications from hiscancer.
Funeral services are pending. Murcer is survived by his wife, Kay; his children, Tori and Todd; and his grandchildren.