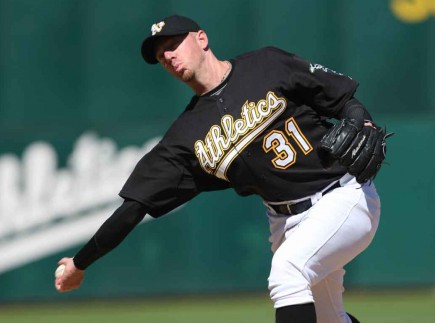 Brad Ziegler, a member of the East Grand Church of Christ in Springfield, Mo., set a major-league record in 2008 by pitching 39 consecutive scoreless innings to start his career. (Photo provided by Oakland A’s)

Brad Ziegler once spent six days in intensive care after he was hit in the head by a line drive in the minor leagues. He had his skull fractured again by a deflected thrown ball one offseason, so he’s had his share of frightening baseball experiences.
On Friday night, Ziegler was struck below the right shoulder blade by a shard of Mike Napoli’s bat when it shattered in the ninth inning.
“When I saw the bat coming, I was like, ‘Great, I’m going to get stabbed,’ ” Ziegler said Saturday morning. “And I also didn’t have any idea where the ball went, so I was trying to duck away from the bat and maybe the ball, too. That was as scary as anything, because I never saw the ball.”

See video of the shard hitting Ziegler, a member of the East Grand Church of Christ in Springfield, Mo.
“I pray every time he gets on the mound to keep him safe,” said Lisa Ziegler, Brad’s mom. “God is listening.”
On Twitter, Brad Ziegler said, “Just so everyone knows, I’m OK. Pretty scary, for the time being, just glad it wasn’t worse.”
Read The Christian Chronicle’s profile of Ziegler from our August edition.