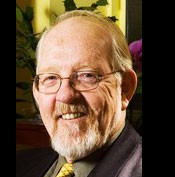 A prayer after Boston Marathon bombings

Bobby Ross Jr.
Robert Randolph, longtime minister for the Brookline Church of Christ in the heart of Boston and chaplain for the Massachusetts Institute of Technology, delivered the invocation at slain MIT police officer Sean Collier’s memorial service.
Collier, 27, was shot to death in his patrol car April 18 in a slaying linked to Boston Marathon bombing suspects Tamerlan and Dzhokhar Tsarnaev.
About 10,000 mourners, including Vice President Joe Biden, gathered for Collier’s April 24 service at MIT.
“We say thank you for Sean, for his gifts, his compassion, his energy, his sense of right and wrong,” Randolph said in his prayer. “We hold him in memory, and we pray that we might see him again. … We live emboldened by the virtues he exemplified.”
The Boston plot that killed three people and injured more than 260 “reminds everybody how vulnerable we are,” Randolph told The Christian Chronicle.
When the bombs exploded April 15, Randolph was providing an energy drink for his daughter Margaret Randolph, who was a few miles from the marathon’s finish line. She had sprained her ankle and was running behind her normal pace, her father said.
Otherwise, “we would have been at the finish line when the bombs went off,” Robert Randolph said.
READ A FIRST-PERSON piece by Robert Randolph on making sense of the Boston tragedy.