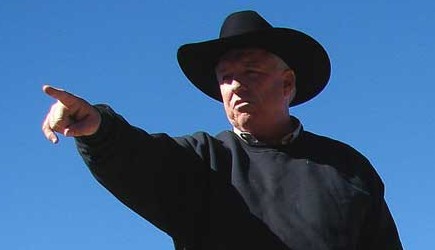 Erik Tryggestad
For 22 years, Rick and Sherry Owens have led American mission teams all over Mexico — with nobody hurt or killed.
And “that is how it is going to end,” Rick Owens said in a recent e-mail to supporters.
The former Alaska oilfield worker has helped build more than 150 church buildings in Mexico. He plans to continue building, but with Mexican crews instead of U.S. volunteers.
“The situation in Mexico continues to deteriorate,” he said. “It is not stable, and I no longer feel confident that our groups will be safe. The violence is escalating and spreading. There is no way to exaggerate how bad things have gotten … and I have no idea how or when it will end.”
Danger along the U.S./Mexico border has intensified as Mexican President Felipe Calderon has increased measures to curb the influence of his country’s powerful drug cartels.
Calderon has deployed 45,000 federal troops and police to combat the gangs, and more than 22,700 people have died in clashes since 2006, The Associated Press reported.
Last year several Churches of Christ canceled mission trips to Mexico — especially those that included bus trips or caravans through the U.S./Mexico border.
This year, U.S. churches have varied in responses to the ongoing border violence. Some have continued or resumed work in Mexico. A group of students from Harding Academy, a K-12 school in Searcy, Ark., associated with Churches of Christ, made a trip to Casa de la Esperanza in Anahuac, Mexico, without incident, said chaperone Jay Simpson.
“Our trip last year was canceled due to the violence,” Simpson said.
The Edmond, Okla., church also canceled its annual trip to Aquiles, Mexico, last year but took a group of college students, teens and families there this year without incident.
Mike Reeves, minister and youth director for the Prineville, Ore., church, takes teen mission groups south of the border near San Diego.
“This year we went to El Nido, a tiny suburb of Tijuana,” Reeves said. “We had a wonderful experience with positive interaction with the church there.
“We had no problems with border crossing and not a single negative incident while there,” Reeves said. “We will plan another mission trip to Mexico for 2011.”
In Abilene, Texas, the Highland Church of Christ decided to focus its mission efforts in other directions after working with Owens for nearly 20 years.
“It was a very hard decision since the trips to Mexico have been life-changing for our youth and sponsors,” church member Jim Trietsch said.
“Last year, we worked with the relief efforts in New Orleans, and this year we are working with the Navajo nation in Crownpoint, New Mexico,” Trietsch said. “Short-term efforts are very beneficial to both the missionaries and the groups being helped. We are glad that we do have some options.”
Mexico’s loss is New Orleans’ gain, said Fred Franke, a New Orleans church member who founded Operation Nehemiah after Hurricane Katrina devastated his city.
“Sometimes when we desire to go somewhere or do something for the Lord, he leads us in another direction, a detour,” Franke said. “While these detours have been a drawback for the work in Mexico, they have been a godsend for mission work in our country — and specifically to our ministry here in New Orleans. We are experiencing massive numbers of mission teams this summer, many of which are being detoured to New Orleans.”